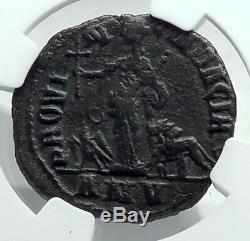 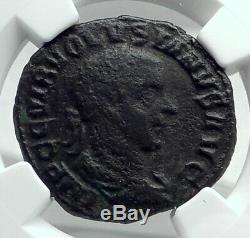 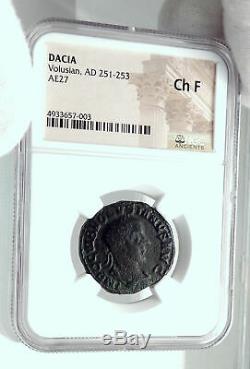 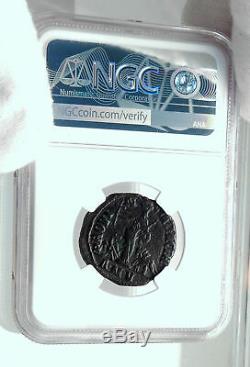 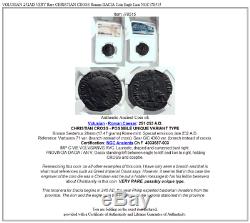 PROVINCIA DACIA / AN V, Dacia standing left between eagle to left and lion to right, holding CROSS and sceptre. Researching this coin, on all other examples of this coin, I have only seen a branch and that is what most references such as Greek Imperial Coins says. However, it seems that in this case the engraver of the coin die was a Christian and he put a hidden message to his his fellow believers about Christianity in this coin. VERY RARE, possibly unique type. This local era for Dacia begins in 246 AD, the year Philip expelled barbarian invaders from the province.

The lion and the eagle were the emblems of the legions stationed in the province. Roman Dacia (also Dacia Traiana and Dacia Felix) was a province of the Roman Empire from 106 to 274-275 AD. Its territory consisted of eastern and south-eastern Transylvania, the Banat, and Oltenia (regions of modern Romania).

It was from the very beginning organized as an imperial province and remained so throughout the Roman occupation. Historians' estimates of the population of Roman Dacia range from 650,000 to 1,200,000. The conquest of Dacia was completed by Emperor Trajan (98-117) after two major campaigns against Decebalus's Dacian kingdom. The Romans did not occupy the entirety of the old Dacian kingdom, as the greater part of Moldavia, together with Maramure and Criana, was ruled by Free Dacians even after the Roman conquest.

During the Marcomannic Wars the military and judicial administration was unified under the command of one governor, with another two senators (the legati legionis) as his subordinates; the province was called tres Daciæ (Three Dacias) or simply Dacia. The Roman authorities undertook in Dacia a massive and organized colonization.

New mines were opened and ore extraction intensified, while agriculture, stock breeding, and commerce flourished in the province. Dacia began to supply grain not only to the military personnel stationed in the province but also to the rest of the Balkan area.

It became a highly urban province, with 11 or 12 cities known, 8 of which held the highest rank of colonia , though the number of cities was fewer than in the region's other provinces. All the cities developed from old military camps. Ulpia Traiana Sarmizegetusa , the seat of the imperial procurator (finance officer) for all the three subdivisions was the financial, religious, and legislative center of the province. Apulum, where the military governor of the three subdivisions had his headquarters, was not simply the greatest city within the province, but one of the biggest across the whole Danubian frontier.

There were military and political threats from the beginning of Roman Dacia's existence. Free Dacians who bordered the province were the first adversary, who, after allying themselves with the Sarmatians, hammered the province during the reign of Marcus Aurelius. Following a calmer period covering the reigns of Commodus through to Caracalla (180-217 AD), the province was once again beset by invaders, this time the Carpi, a Dacian tribe in league with the newly arrived Goths, who in time became a serious difficulty for the empire.

Finding it increasingly difficult to retain Dacia, the emperors were forced to abandon the province by the 270s, becoming the first of Rome's long-term possessions to be abandoned. Dacia was devastated by the Germanic tribes (Goths, Taifali, Bastarns) together with the Carpi in 248-250, by the Carpi and Goths in 258 and 263, the Goths and Heruli in 267 and 269. Ancient sources implied that Dacia was virtually lost during the reign of Gallienus (253-268), but they also report that it was Aurelian (270-275) who relinquished Dacia Traiana. He evacuated his troops and civilian administration from Dacia, and founded Dacia Aureliana with its capital at Serdica in Lower Moesia. The fate of the Romanized population of the former province of Dacia Traiana has become subject of spirited controversy. One theory holds that the Latin language spoken in ancient Dacia, where Romania was to be formed in the future, gradually turned into Romanian; in parallel, a new people-the Romanians-were formed from the Daco-Romans (the Romanized population of Dacia Traiana). The opposing theory argues that the Romanians descended from the Romanized population of the Roman provinces of the Balkan Peninsula. Legio quinta Macedonica (Fifth Macedonian Legion) was a Roman legion. It was probably originally levied by consul Gaius Vibius Pansa Caetronianus and Octavian in 43 BC, and it was stationed in Moesia at least until 5th century. Its symbol was the bull, but the eagle was used as well. The cognomen Macedonica comes from the fact that the legion was stationed in Macedonia for a significant period of its existence. 2nd century: In Dacia, protecting Danube frontier. In 101, the legion moved to Dacia, to fight in Emperor Trajan's campaign against the king Decebalus. The legate of the V Macedonica was future emperor Hadrian.

After the war ended in 106, the legion remained in Troesmis (modern Iglita), near the Danube Delta since 107. A centurion of the legion, Calventius Viator, rose to prominence under Hadrian.

He was eventually promoted to commander of the emperors horse guards, the equites singulares Augusti. The northern frontier was a hot border of the Empire; when emperor Marcus Aurelius had to fight against the Marcomanni, the Sarmatians, and the Quadi, the V Macedonica was involved in these fights. At the beginning of the reign of Commodus, the V Macedonica and the XIII Gemina defeated once again the Sarmatians, under the later usurpers Pescennius Niger and Clodius Albinus. The Fifth later supported Septimius Severus, in his fight for the purple.

In 185 or 187, the legion was awarded of the title Pia Constans ("Faithful and reliable") or Pia Fidelis ("Faithful and loyal"), after defeating a mercenary army in Dacia. Later centuries: Honors and evolution. While staying in Potaissa for most of the 3rd century, V Macedonica fought several times, earning honors. Valerian gave the Fifth the name III Pia III Fidelis ; his son, Gallienus gave the legion the title VII Pia VII Fidelis , with the 4th, 5th and 6th titles awarded probably when the legion was used as a mobile cavalry unit against usurpers Ingenuus and Regalianus (260, Moesia). A vexillatio fought against Victorinus (Gaul, 269-271).

It guarded the province in later centuries, becoming a comitatensis unit under the Magister Militum per Orientis. It probably became part of the Byzantine army. The cavalry unit created by Gallienus was definitively detached by Diocletian, and become part of his comitatus.

This unit was sent to Mesopotamia, where it successfully fought against the Sassanid Empire in 296, and then to Memphis, where it had to stay until its entering in the Byzantine army. Legio tertia decima Gemina (Thirteenth Twin Legion) was one of the most prominent Roman legions. It was one of Julius Caesar's key units in Gaul and in the civil war, and was the legion with which he famously crossed the Rubicon on January 10, 49 BC. The legion appears to have still been in existence in the fifth century. Its symbol was the lion.

August, 253 was a Roman emperor (251 - 253). He was son to Gaius Vibius Trebonianus Gallus by his wife Afinia Gemina Baebiana.

He is known to have had a sister, Vibia Galla. The death of Decius in early June, 251 led to Trebonianus Gallus' elevation to the throne. Gallus adopted Decius' son Hostilian and made him co-ruler. Volusianus was named Caesar and Princeps Juventutis. Later in 251 Hostilian died of the plague and Volusianus replaced him as Augustus and co-ruler. Father and son were both killed in 253 by mutinous troops in Interamna. World-renowned expert numismatist, enthusiast, author and dealer in authentic ancient Greek, ancient Roman, ancient Byzantine, world coins & more. Ilya Zlobin is an independent individual who has a passion for coin collecting, research and understanding the importance of the historical context and significance all coins and objects represent. Send me a message about this and I can update your invoice should you want this method. Getting your order to you, quickly and securely is a top priority and is taken seriously here. Great care is taken in packaging and mailing every item securely and quickly. What is a certificate of authenticity and what guarantees do you give that the item is authentic? You will be very happy with what you get with the COA; a professional presentation of the coin, with all of the relevant information and a picture of the coin you saw in the listing. Additionally, the coin is inside it's own protective coin flip (holder), with a 2x2 inch description of the coin matching the individual number on the COA.

My goal is to provide superior products and quality of service. How and where do I learn more about collecting ancient coins? Visit the Guide on How to Use My Store. For on an overview about using my store, with additional information and links to all other parts of my store which may include educational information on topics you are looking for. The item "VOLUSIAN 252AD VERY Rare CHRISTIAN CROSS Roman DACIA Coin Eagle Lion NGC i78515" is in sale since Monday, June 10, 2019.