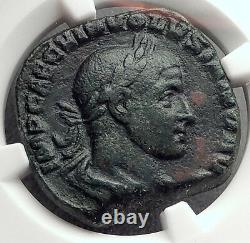 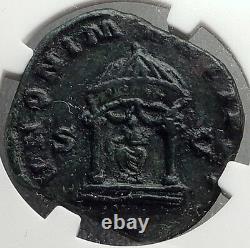 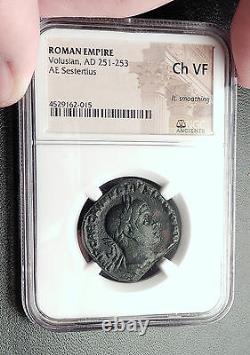 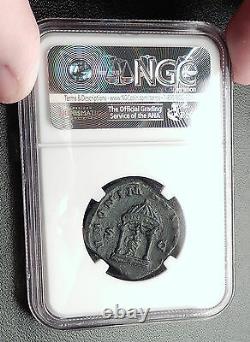 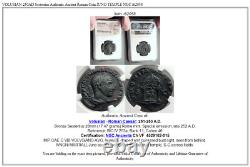 Ch VF 4529162-015 IMP CAE C VIB VOLVSIANO AVG, laureate, draped and cuirassed bust right, seen from behind. IVNONI MARTIALI, Juno seated facing in domed distyle temple, S-C across fields. Juno is an ancient Roman goddess, the protector and special counselor of the state. She is a daughter of Saturn and sister (but also the wife) of the chief god Jupiter and the mother of Mars and Vulcan. Juno also looked after the women of Rome.

Her Greek equivalent was Hera. Her Etruscan counterpart was Uni.

As the patron goddess of Rome and the Roman Empire, Juno was called Regina ("Queen") and, together with Jupiter and Minerva, was worshipped as a triad on the Capitol (Juno Capitolina) in Rome. Juno's own warlike aspect among the Romans is apparent in her attire. She often appeared sitting pictured with a peacock armed and wearing a goatskin cloak. The traditional depiction of this warlike aspect was assimilated from the Greek goddess Athena, whose goatskin was called the'aegis'. Juno Regina is perhaps the epithet most fraught with questions.

While some scholars maintain she was known as such at Rome since the most ancient times as paredra of Jupiter in the Capitoline Triad others think she is a new acquisition introduced to Rome after her evocatio from Veii. Palmer thinks she is to be identified with Juno Populona of later inscriptions, a political and military poliadic deity who had in fact a place in the Capitoline temple and was intended to represent the Regina of the king. The date of her introduction, though ancient, would be uncertain; she should perhaps be identified with Hera Basilea or as the queen of Jupiter Rex. The actual epithet Regina could though come from Veii. At Rome this epithet may have been applied to a Juno other than that of the temple on the Aventine built to lodge the evocated Veian Juno as the rex sacrorum and his wife-queen were to offer a monthly sacrifice to Juno in the Regia.

This might imply that the prerepublican Juno was royal. Gagé dismisses these assumptions as groundless speculations as no Jupiter Rex is attested and in accord with Roe D'Albret stresses that at Rome no presence of a Juno Regina is mentioned before Marcus Furius Camillus, while she is attested in many Etruscan and Latin towns. Before that time her Roman equivalent was Juno Moneta. Marcel Renard for his part considers her an ancient Roman figure since the title of the Veian Juno expresses a cultic reality that is close to and indeed presupposes the existence at Rome of an analogous character: as a rule it is the presence of an original local figure that may allow the introduction of the new one through evocatio.

He agrees with Dumezil that we ignore whether the translation of the epithet is exhaustive and what Etruscan notion corresponded to the name Regina which itself is certainly an Italic title. This is the only instance of evocatio recorded by the annalistic tradition. However Renard considers Macrobius's authority reliable in his long list of evocationes on the grounds of an archaeological find at Isaura. Roe D'Albret underlines the role played by Camillus and sees a personal link between the deity and her magistrate. Similarly Dumezil has remarked the link of Camillus with Mater Matuta.

In his relationship to the goddess he takes the place of the king of Veii. Camillus's devotion to female deities Mater Matuta and Fortuna and his contemporary vow of a new temple to both Matuta and Iuno Regina hint to a degree of identity between them: this assumption has by chance been supported by the discovery at Pyrgi of a bronze lamella which mentions together Uni and Thesan, the Etruscan Juno and Aurora, i. One can then suppose Camillus's simultaneous vow of the temples of the two goddesses should be seen in the light of their intrinsic association.

Octavianus will repeat the same translation with the statue of the Juno of Perusia in consequence of a dream. That a goddess evoked in war and for political reasons receive the homage of women and that women continue to have a role in her cult is explained by Palmer as a foreign cult of feminine sexuality of Etruscan derivation. Gagé and D'Albret remark an accentuation of the matronal aspect of Juno Regina that led her to be the most matronal of the Roman goddesses by the time of the end of the republic. This fact raises the question of understanding why she was able of attracting the devotion of the matronae. Gagé traces back the phenomenon to the nature of the cult rendered to the Juno Regina of the Aventine in which Camillus played a role in person.

The original devotion of the matronae was directed to Fortuna. Camillus was devout to her and to Matuta, both matronal deities. When he brought Juno Regina from Veii the Roman women were already acquainted with many Junos, while the ancient rites of Fortuna were falling off.

Camillus would have then made a political use of the cult of Juno Regina to subdue the social conflicts of his times by attributing to her the role of primordial mother. Juno Regina had two temples (aedes) in Rome. The one dedicated by Furius Camillus in 392 BC stood on the Aventine: it lodged the wooden statue of the Juno transvected from Veii.

It is mentioned several times by Livy in connexion with sacrifices offered in atonement of prodigia. It was restored by Augustus. Two inscriptions found near the church of S. Sabina indicate the approximate site of the temple, which corresponds with its place in the lustral procession of 207 BC, near the upper end of the Clivus Publicius.

The day of the dedication and of her festival was September 1. Another temple stood near the circus Flaminius, vowed by consul Marcus Aemilius Lepidus in 187 BC during the war against the Ligures and dedicated by himself as censor in 179 on December 23. It was connected by a porch with a temple of Fortuna, perhaps that of Fortuna Equestris.

Its probable site according to Platner is just south of the porticus Pompeiana on the west end of circus Flaminius. The Juno Cealestis of Carthage Tanit was evoked according to Macrobius. She did not receive a temple in Rome: presumably her image was deposited in another temple of Juno (Moneta or Regina) and later transferred to the Colonia Junonia founded by Caius Gracchus. The goddess was once again transferred to Rome by emperor Elagabalus.

August, 253 was a Roman emperor (251 - 253). He was son to Gaius Vibius Trebonianus Gallus by his wife Afinia Gemina Baebiana. He is known to have had a sister, Vibia Galla. The death of Decius in early June, 251 led to Trebonianus Gallus' elevation to the throne. Gallus adopted Decius' son Hostilian and made him co-ruler.

Volusianus was named Caesar and Princeps Juventutis. Later in 251 Hostilian died of the plague and Volusianus replaced him as Augustus and co-ruler. Father and son were both killed in 253 by mutinous troops in Interamna.

World-renowned expert numismatist, enthusiast, author and dealer in authentic ancient Greek, ancient Roman, ancient Byzantine, world coins & more. Ilya Zlobin is an independent individual who has a passion for coin collecting, research and understanding the importance of the historical context and significance all coins and objects represent. Send me a message about this and I can update your invoice should you want this method. Getting your order to you, quickly and securely is a top priority and is taken seriously here. Great care is taken in packaging and mailing every item securely and quickly. What is a certificate of authenticity and what guarantees do you give that the item is authentic? You will be very happy with what you get with the COA; a professional presentation of the coin, with all of the relevant information and a picture of the coin you saw in the listing. Additionally, the coin is inside it's own protective coin flip (holder), with a 2x2 inch description of the coin matching the individual number on the COA. Whether your goal is to collect or give the item as a gift, coins presented like this could be more prized and valued higher than items that were not given such care and attention to. When should I leave feedback? Please don't leave any negative feedbacks, as it happens sometimes that people rush to leave feedback before letting sufficient time for their order to arrive. The matter of fact is that any issues can be resolved, as reputation is most important to me. My goal is to provide superior products and quality of service.