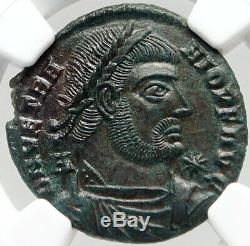 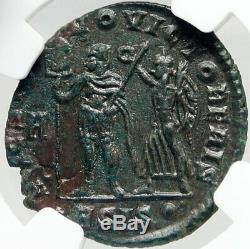 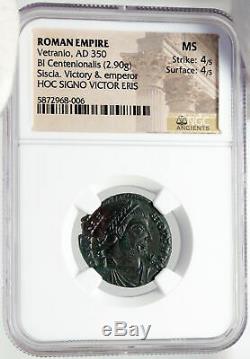 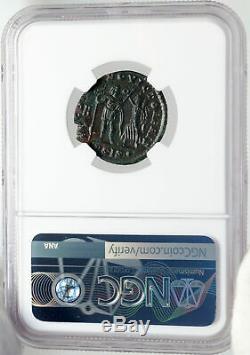 The reverse alludes to Constantine's vision before his victory over Magnentius in 312. This is the only coin type to specifically refer to Constantine the Greats vision of 310 and dream of 312 that led him to accept Christianity. This coin was struck under Vetranio during the turbulent period of Magnentius' revolt in 350 AD. The reverse legend ('by this sign you shall conquer') refers to the divinely inspired vision of Constantine the Great before the Battle of the Milvian Bridge, and thus alludes to Vetranio's loyalty to the house of Constantine.

Vetranio eventually handed over his legions to Constantius II at Naissus, afterward withdrawing into an honorable retirement at Prusa in Bithynia. VICTOR ERIS - Victory crowning the emperor, who stands in military dress, holding in his right hand a labarum, on which appears the monogram of Christ, and in his left a spear. The monogram of Christ was introduced by order of Constantine the Great on a standard, when setting out on his campaign against Maxentius. This standard being carried into the middle of the ranks, where the danger appeared the greatest, and invariably bringing victory with it, according to Eusebius, it at length became the belief, that success was to be attributed to the standard alone; and hence is gathered the sense of the legend, HOC SIGNO VICTORY ERIS, which, in all probability, was inscribed upon the actual standard. The labarum was a vexillum (military standard) that displayed the "Chi-Rho" symbol , a christogram formed from the first two Greek letters of the word "Christ" (Greek: , or) - Chi and Rho.

It was first used by the Roman emperor Constantine I. Since the vexillum consisted of a flag suspended from the crossbar of a cross, it was ideally suited to symbolize the crucifixion of Christ. Ancient sources draw an unambiguous distinction between the two terms "labarum" and "Chi-Rho", even though later usage sometimes regards the two as synonyms. The name labarum was applied both to the original standard used by Constantine the Great and to the many standards produced in imitation of it in the Late Antique world, and subsequently.

The Chi Rho is one of the earliest forms of christogram, and is used by some Christians. It is formed by superimposing the first two (capital) letters chi and rho of the Greek word " " = KR istos =Christ in such a way to produce the monogram. Although not technically a Christian cross, the Chi-Rho invokes the authority of Jesus, as well as symbolising his status as the Christ.

The Chi-Rho symbol was also used by pagan Greek scribes to mark, in the margin, a particularly valuable or relevant passage; the combined letters Chi and Rho standing for chrston, meaning good. Some coins of Ptolemy III Euergetes r. 246-222 BC were marked with a Chi-Rho.

Early symbols similar to the Chi Rho were the Staurogram and the IX monogram . 360, born in the province of Moesia in a part of the region located in modern Bulgaria, is sometimes but apparently incorrectly referred to as Vetriano.

He was an experienced soldier and officer when he was asked by Constantina, the sister of Roman Emperor Constantius II, to proclaim himself Caesar (March 1, 350). Her brother Constans had been killed by Magnentius earlier that year and she probably thought Vetranio could protect her family and herself against the usurper. Vetranio accepted and coins were minted in his name, showing the title of Augustus (full emperor), rather than Caesar.

Vetranio subsequently abdicated on December 25, 350. He was allowed to live the remainder of his years as a private citizen on a state pension. World-renowned expert numismatist, enthusiast, author and dealer in authentic ancient Greek, ancient Roman, ancient Byzantine, world coins & more. Ilya Zlobin is an independent individual who has a passion for coin collecting, research and understanding the importance of the historical context and significance all coins and objects represent. Send me a message about this and I can update your invoice should you want this method. Getting your order to you, quickly and securely is a top priority and is taken seriously here. Great care is taken in packaging and mailing every item securely and quickly. What is a certificate of authenticity and what guarantees do you give that the item is authentic?

How and where do I learn more about collecting ancient coins? Visit the Guide on How to Use My Store. For on an overview about using my store, with additional information and links to all other parts of my store which may include educational information on topics you are looking for. The item "VETRANIO Ancient Roman Coin CONSTANTINE the Great CHRISTIAN VISION NGC i83545" is in sale since Tuesday, April 7, 2020. This item is in the category "Coins & Paper Money\Coins\ Ancient\Roman\ Imperial (27 BC-476 AD)".