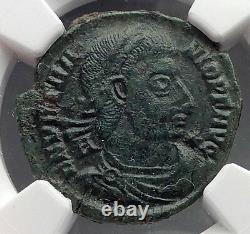 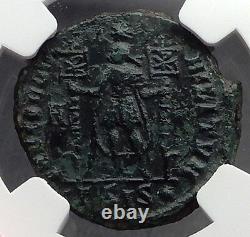 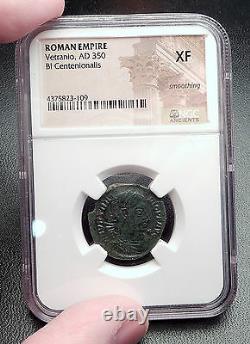 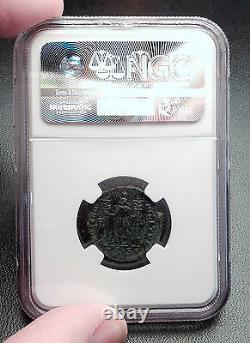 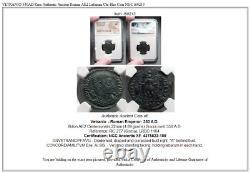 Vetranio standing facing, holding labarum in each hand; star above. 360, born in the province of Moesia in a part of the region located in modern Bulgaria, is sometimes but apparently incorrectly referred to as Vetriano. He was an experienced soldier and officer when he was asked by Constantina, the sister of Roman Emperor Constantius II, to proclaim himself Caesar (March 1, 350). Her brother Constans had been killed by Magnentius earlier that year and she probably thought Vetranio could protect her family and herself against the usurper. Vetranio accepted and coins were minted in his name, showing the title of Augustus (full emperor), rather than Caesar. Vetranio subsequently abdicated on December 25, 350. He was allowed to live the remainder of his years as a private citizen on a state pension.

Additionally, the coin is inside it's own protective coin flip (holder), with a 2x2 inch description of the coin matching the individual number on the COA. Whether your goal is to collect or give the item as a gift, coins presented like this could be more prized and valued higher than items that were not given such care and attention to. Is there a number I can call you with questions about my order? When should I leave feedback? Please don't leave any negative feedbacks, as it happens sometimes that people rush to leave feedback before letting sufficient time for their order to arrive. The matter of fact is that any issues can be resolved, as reputation is most important to me.