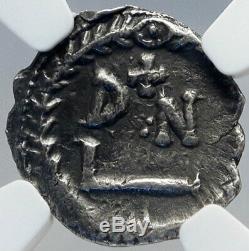 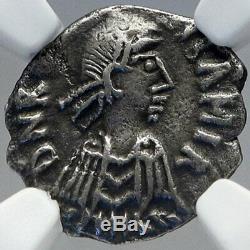 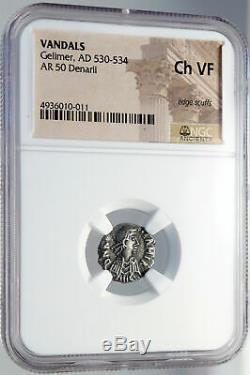 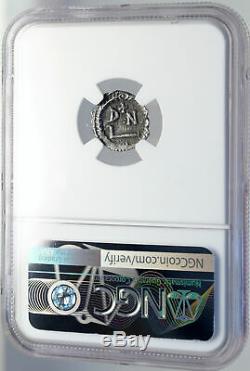 Gelimer (original form possibly Geilamir , 480-553), King of the Vandals and Alans (530-534), was the last Germanic ruler of the North African Kingdom of the Vandals. He became ruler on 15 June 530 after deposing his first cousin twice removed, Hilderic, who had angered the Vandal nobility by converting to Chalcedonian Christianity, as most of the Vandals at this time were fiercely devoted to Arian Christianity. The Eastern Roman Emperor Justinian I, who had supported Hilderic, soon declared war on the Vandals, ostensibly to restore Hilderic. In June 533, Justinian sent an expeditionary force commanded by Belisarius which finally reached Africa in the beginning of September.

Meanwhile, in Sardinia, which formed part of the Vandal domain, the governor Godas, a Goth, revolted against Gelimer and began to treat with Justinian as an independent sovereign. Gelimer, ignorant or contemptuous of Justinian's plans, sent a large army consisting of most of the available army in Africa under his brother Tzazo to crush the rebellion, meaning that the landing of Belisarius was entirely unopposed. On landing, Belisarius immediately marched for Carthage, finally meeting resistance on 13 September when he was confronted by Gelimer at Ad Decimum, 10 miles from Carthage. Although outnumbered 11,000 to 17,000 the battle was evenly fought by the Vandals until Gelimer's brother Ammatas was killed, at which time Gelimer lost heart and fled.

On 14 September 533, Belisarius entered Carthage and ate the feast prepared for Gelimer in his palace. However, Belisarius was too late to save the life of Hilderic, who had been slain at Gelimer's orders as soon as the news of the landing of the imperial army came. However, Gelimer had escaped the Roman pursuit, and on the return of Tzazo from Sardinia the combined Vandal army met Belisarius in battle, this time at a place called Tricamarum about 20 miles from Carthage (December 533). This battle was far more stubbornly contested than that of Ad Decimum, but it ended in the utter rout of the Vandals and, once more, the flight of Gelimer. He retreated to Mons Pappua (maybe in the Mount Edough, near Annaba) on the border of Numidia, where he soon found himself besieged by Byzantine forces under Pharas. According to Procopius, when summoned to surrender Gelimer instead asked Pharas to send him a loaf of bread, a sponge, and a lyre, to make the winter months on Pappua more bearable. Finally, in March 534, with his followers and their children starving and realizing he had no chance of regaining his kingdom, Gelimer surrendered to Belisarius and accepted the Romans' offer of vast estates in Galatia where he lived to be an old man. According to Byzantine chronicles, on his abdication he achieved some degree of anecdotal fame by crying out the verse from Ecclesiastes,'Vanity of vanities, all is vanity' during Justinian's triumph in Constantinople. The Vandals were an East Germanic tribe, or group of tribes, who were first heard of in southern Poland, but later moved around Europe establishing kingdoms in Spain and later North Africa in the 5th century. The Vandals are believed to have migrated from southern Scandinavia to the area between the lower Oder and Vistula rivers during the 2nd century BC and to have settled in Silesia from around 120 BC. They are associated with the Przeworsk culture and were possibly the same people as the Lugii. Expanding into Dacia during the Marcomannic Wars and to Pannonia during the Crisis of the Third Century, the Vandals were confined to Pannonia by the Goths around 330 AD, where they received permission to settle by Constantine the Great.

Around 400 the Vandals were pushed westwards again, this time by the Huns, crossing the Rhine into Gaul along with other tribes in 406. In 409, the Vandals crossed the Pyrenees into the Iberian Peninsula, where their main groups, the Hasdingi and the Silingi, settled in Gallaecia (northwest) and Baetica (south central) respectively.

After the Visigoths invaded Iberia, the Iranian Alans and Silingi Vandals voluntarily subjected to the rule of Hasdingian leader Gunderic, who was pushed from Gallaecia to Baetica by a Roman-Suebi coalition in 419. In 429, under king Genseric, the Vandals entered North Africa. By 439 they established a kingdom which included the Roman province of Africa as well as Sicily, Corsica, Sardinia, Malta and the Balearic Islands. They fended off several Roman attempts to recapture the African province, and sacked the city of Rome in 455. Their kingdom collapsed in the Vandalic War of 533-4, in which Justinian I managed to reconquer the province for the Eastern Roman Empire. Renaissance and Early Modern writers characterized the Vandals as barbarians, "sacking and looting" Rome. This led to the use of the term "vandalism" to describe any senseless destruction, particularly the "barbarian" defacing of artwork. However, modern historians tend to regard the Vandals during the transitional period from Late Antiquity to the Early Middle Ages as perpetuators, not destroyers, of Roman culture. World-renowned expert numismatist, enthusiast, author and dealer in authentic ancient Greek, ancient Roman, ancient Byzantine, world coins & more. Ilya Zlobin is an independent individual who has a passion for coin collecting, research and understanding the importance of the historical context and significance all coins and objects represent. Send me a message about this and I can update your invoice should you want this method. Getting your order to you, quickly and securely is a top priority and is taken seriously here.