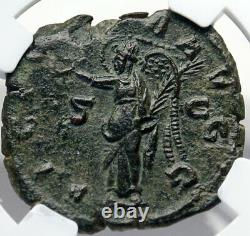 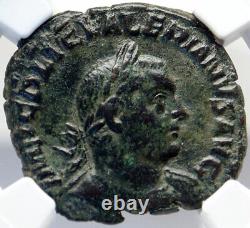 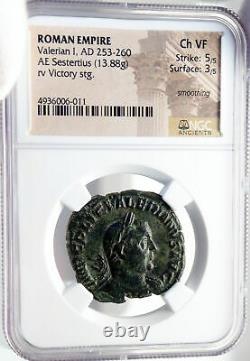 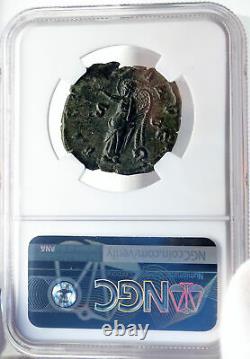 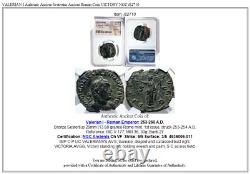 VICTORIA AVGG, Victory standing left, holding wreath and palm; S C across field. In ancient Roman religion, Victoria or Victory was the personified goddess of victory. She is the Roman equivalent of the Greek goddess Nike, and was associated with Bellona. She was adapted from the Sabine agricultural goddess Vacuna and had a temple on the Palatine Hill.

The goddess Vica Pota was also sometimes identified with Victoria. Unlike the Greek Nike, the goddess Victoria (Latin for "victory") was a major part of Roman society. Multiple temples were erected in her honor. When her statue was removed in 382 CE by Emperor Gratianus there was much anger in Rome. She was normally worshiped by triumphant generals returning from war.

She is often seen with or in a chariot, as in the late 18th-century sculpture representing Victory in a quadriga on the Brandenburg Gate in Berlin, Germany; "Il Vittoriano" in Rome has two. Winged figures, very often in pairs, representing victory and referred to as "victories", were common in Roman official iconography, typically hovering high in a composition, and often filling spaces in spandrels or other gaps in architecture. These represent the spirit of victory rather than the goddess herself. They continued to appear after Christianization of the Empire, and slowly mutated into Christian angels. 200 - after 260, commonly known in English as Valerian or Valerian I, was the Roman Emperor from 253 to 260. Unlike the majority of the pretenders during the Crisis of the Third Centuryy, Valerian was of a noble and traditional senatorial family. Details of his early life are elusive, but for his marriage to Egnatia Mariniana, who gave him two sons: later emperor Publius Licinius Egnatius Gallienus and Valerianus Minor. In 238 he was princeps senatus, and Gordian I negotiated through him for Senatorial acknowledgement for his claim as emperor. In 251, when Decius revived the censorship with legislative and executive powers so extensive that it practically embraced the civil authority of the emperor, Valerian was chosen censor by the Senate, though he declined to accept the post. Under Decius he was nominated governor of the Rhine provinces of Noricum and Raetia and retained the confidence of his successor, Trebonianus Gallus, who asked him for reinforcements to quell the rebellion of Aemilianus. Valerian's first act as emperor was to make his son Gallienus his colleague. In the beginning of his reign the affairs in Europe went from bad to worse and the whole West fell into disorder. In the East, Antioch had fallen into the hands of a Sassanid vassal, Armenia was occupied by Shapur I (Sapor). Valerian and Gallienus split the problems of the empire between the two, with the son taking the West and the father heading East to face the Persian threat. Later in 259, he moved to Edessa, but an outbreak of plague killed a critical number of legionaries, weakening the Roman position in Edessa which was then besieged by the Persians. At the beginning of 260, Valerian was defeated in the Battle of Edessa and he arranged a meeting with Shapur to negotiate a peace settlement.

The ceasefire was betrayed by Shapur who seized him and held him prisoner for the remainder of his life. Valerian's capture was a humiliating defeat for the Romans.

Gibbon, in The History of the Decline and Fall of the Roman Empire describes Valerian's fate. The voice of history, which is often little more than the organ of hatred or flattery, reproaches Sapor with a proud abuse of the rights of conquest. We are told that Valerian, in chains, but invested with the Imperial purple, was exposed to the multitude, a constant spectacle of fallen greatness; and that whenever the Persian monarch mounted on horseback, he placed his foot on the neck of a Roman emperor. Notwithstanding all the remonstrances of his allies, who repeatedly advised him to remember the vicissitudes of fortune, to dread the returning power of Rome, and to make his illustrious captive the pledge of peace, not the object of insult, Sapor still remained inflexible. When Valerian sunk under the weight of shame and grief, his skin, stuffed with straw, and formed into the likeness of a human figure, was preserved for ages in the most celebrated temple of Persia; a more real monument of triumph, than the fancied trophies of brass and marble so often erected by Roman vanity.

The tale is moral and pathetic, but the truth of it may very fairly be called in question. The letters still extant from the princes of the East to Sapor are manifest forgeries; nor is it natural to suppose that a jealous monarch should, even in the person of a rival, thus publicly degrade the majesty of kings. Whatever treatment the unfortunate Valerian might experience in Persia, it is at least certain that the only emperor of Rome who had ever fallen into the hands of the enemy, languished away his life in hopeless captivity. Valerian's massacre of 258.

According to the Catholic Encyclopedia article on Valerian. Pope Sixtus was seized on 6 August, 258, in one of the Catacombs and was put to death; Cyprian of Carthage suffered martyrdom on 14 September. Another celebrated martyr was the Roman deacon St. In Spain Bishop Fructuosus of Tarragona and his two deacons were put to death on 21 January, 259. There were also executions in the eastern provinces (Eusebius, VII, xii). Taken altogether, however, the repressions were limited to scattered spots and had no great success. An early Christian source, Lactantius, maintained that for some time prior to his death Valerian was subjected to the greatest insults by his captors, such as being used as a human footstool by Shapur when mounting his horse. According to this version of events, after a long period of such treatment Valerian offered Shapur a huge ransom for his release. In reply, according to one version, Shapur was said to have forced Valerian to swallow molten gold (the other version of his death is almost the same but it says that Valerian was killed by being flayed alive) and then had the unfortunate Valerian skinned and his skin stuffed with straw and preserved as a trophy in the main Persian temple. It was further alleged by Lactantius that it was only after a later Persian defeat against Rome that his skin was given a cremation and burial.

The role of a Chinese prince held hostage by Shapur I, in the events following the death of Valerian has been frequently debated by historians, without reaching any definitive conclusion. The Humiliation of Emperor Valerian by Shapur I, pen and ink, Hans Holbein the Younger, ca. Some modern scholars believe that, contrary to Lactantius' account, Shapur I sent Valerian and some of his army to the city of Bishapur where they lived in relatively good condition. Shapur used the remaining soldiers in engineering and development plans.

Band-e Kaisar (Caesar's dam) is one of the remnants of Roman engineering located near the ancient city of Susa. In all the stone carvings on Naghshe-Rostam, in Iran, Valerian is respected by holding hands with Shapur I, in sign of submission.

It is generally supposed that some of Lactantius' account is motivated by his desire to establish that persecutors of the Christians died fitting deaths; the story was repeated then and later by authors in the Roman Near East "fiercely hostile" to Persia. Other modern scholars tend to give at least some credence to Lactantius' account. Valerian and Gallienus' joint rule was threatened several times by usurpers.

Despite several usurpation attempts, Gallienus secured the throne until his own assassination in 268. Owing to imperfect and often contradictory sources, the chronology and details of this reign are very uncertain. World-renowned expert numismatist, enthusiast, author and dealer in authentic ancient Greek, ancient Roman, ancient Byzantine, world coins & more. Ilya Zlobin is an independent individual who has a passion for coin collecting, research and understanding the importance of the historical context and significance all coins and objects represent. Send me a message about this and I can update your invoice should you want this method.