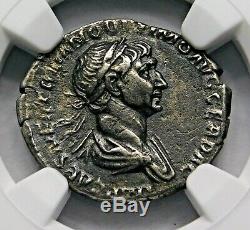 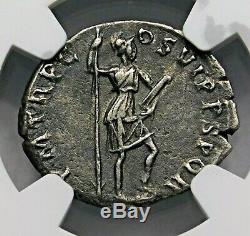 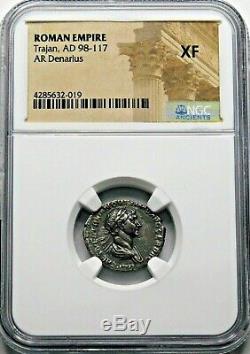 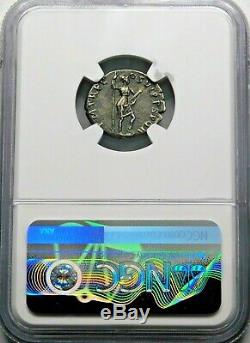 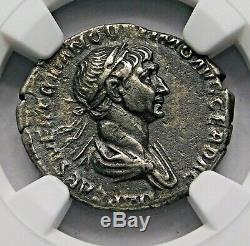 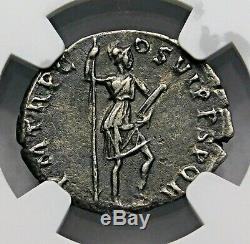 Trajan (AD 98-117) AR Denarius (3.18g, 19mm, 6h) Struck AD 114-117. Obv: IMP CAES NER TRAIANO OPTIMO AVG GER DAC, laureate and draped bust right. / Rev: P M TR P COS VI P P S P Q R, Virtus standing right, holding spear and parazonium, foot on helmet. This coin is guaranteed for life to be a genuine ancient coin. Here at Ancient Auctions we have pledged to uphold the highest ethical standards. Trajan (Latin: Imperator Caesar Nerva Traianus Divi Nervae filius Augustus; 18 September 53 - 8 August 117 AD) was Roman emperor from 98 to 117 AD. Officially declared by the Senate optimus princeps ("the best ruler"), Trajan is remembered as a successful soldier-emperor who presided over the greatest military expansion in Roman history, leading the empire to attain its maximum territorial extent by the time of his death. He is also known for his philanthropic rule, overseeing extensive public building programs and implementing social welfare policies, which earned him his enduring reputation as the second of the Five Good Emperors who presided over an era of peace and prosperity in the Mediterranean world. Born in the city of Italica in the province of Hispania Baetica, Trajan's non-patrician family was of Italian and Iberian origin. Trajan rose to prominence during the reign of emperor Domitian.

Serving as a legatus legionis in Hispania Tarraconensis, in 89 Trajan supported Domitian against a revolt on the Rhine led by Antonius Saturninus. In September 96, Domitian was succeeded by Marcus Cocceius Nerva, an old and childless senator who proved to be unpopular with the army. After a brief and tumultuous year in power, culminating in a revolt by members of the Praetorian Guard, Nerva was compelled to adopt the more popular Trajan as his heir and successor. He died on 27 January 98 and was succeeded by his adopted son without incident.

Trajan's war against the Parthian Empire ended with the sack of the capital Ctesiphon and the annexation of Armenia and Mesopotamia. His campaigns expanded the Roman Empire to its greatest territorial extent. In late 117, while sailing back to Rome, Trajan fell ill and died of a stroke in the city of Selinus.

He was deified by the Senate and his ashes were laid to rest under Trajan's Column. He was succeeded by his adopted son Hadrian. International Buyers - Please Note. Outstanding Denarius circa 103-111 AD. Ancient Roman Silver Coin" is in sale since Friday, September 13, 2019.