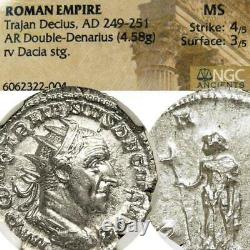 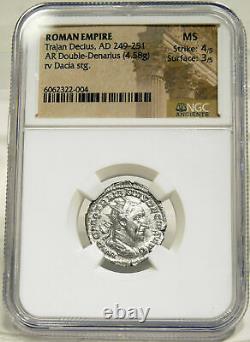 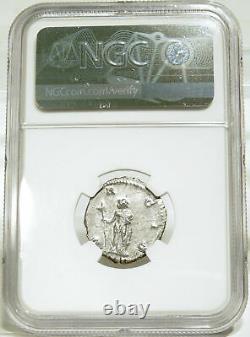 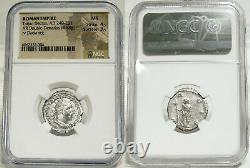 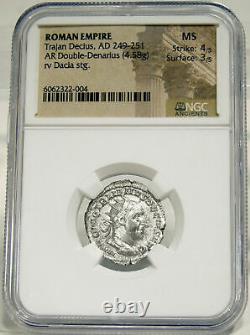 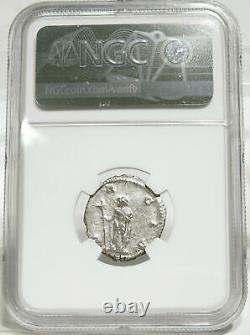 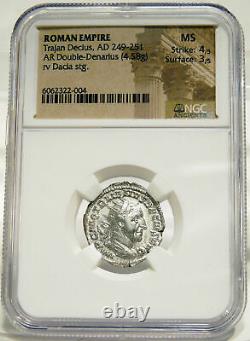 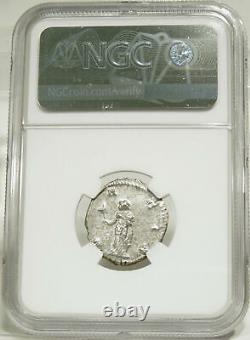 Reverse: the two Pannoniae standing facing, looking in opposite directions, raising their right hands, each with a standard. NGC Certified Ancient & Graded MS Choice About Uncirculated! NGC Certified Ancient & Graded MS Mint State! PANNONIAE - The division of this region into two parts is characterised by two female figures, on gold, silver, and brass [coinage] of Trajanus Decius. These provinces were the first to proclaim his election to the purple, and it was to the fidelity and bravery of the Pannonian legions that he owed his victory over Philip.

Silver Antoninianus / double denarius. Certified Genuine Graded MS Mint State! Rome Mint, Struck 249-251 AD. Obverse: IMP C M Q TRAIANVS DECIVS AVG, radiate, draped and cuirassed bust right, from behind. Reverse DACIA, Dacia, wearing robe reaching feet, standing left holding vertical staff topped with a wolf's head (Draco). The Great Dracones, the Dacian Dragon, with the head of a wolf and the body of the snake, is the symbol of the unification of what is above with what is below. The Wolf head stands as the symbol of the great Dak-sha, the Supreme Divinity of the Universe, mentioned in the Vede as the Father God of the Dacians (hence their name), and the snake body symbol of immortality, is also the symbol of the Great Zamolxis, the Lord of the Underworld. The Dacian Dragon, made of bronze or silver, and the body of a snake (made of sturdy cloth), was also the Dacian flag of war, through an ingenious workmanship, was howling fiercely under the action of the air passing through it when the Dacian warriors were rushing in a gallop at the enemy.

Combined with the blood-curling screams of the warriors, the effect on the enemy was frightening. The Dacians were calling themselves "immortal". That made them the most feared of the ancient people, as they were going to death laughing and rejoicing. The earliest draco (dracones) found in Dacia dates back to the fourth century BC, the dacians used the Draco as their millitary standard. They considered themselves "Sons of Light" and had the draco made from three colors, red - representing morning, yellow - representing the noon and blue - representing the dusk.

After the occupation of Dacia the Romans enlisted the Dacians into their army. The Dacian Cohort's spread through all the empire, in Britannia the dacians were assigned the defending of Hadrian's wall. The Romans adopted the draco as their millitary standard.

Legio XIII gemina which stationed at Apullum (present day Alba Iulia, Romania) had a draco made with the tail in three colors, blue, yellow and red. This is the origin of the Romanian flag. RIC IV 12(b), RSC IV 16. INDEPENDENTLY CERTIFIED & GRADED By NGC MS Mint State! Fine swirl marks are on plastic holder--these are NOT scratches on the coin but the plastic holder which are accentuated by the lighting in some images. OUR GUARANTEE: All illustrations are of the actual item offered. The authenticity of all pieces is fully guaranteed for life. Images are not actual size Please see description for actual measurements. This item is in the category "Coins & Paper Money\Coins: Ancient\Roman: Imperial (27 BC-476 AD)". The seller is "zeus_gallery" and is located in this country: US. This item can be shipped worldwide.