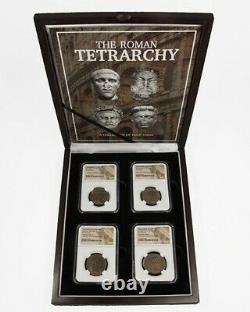 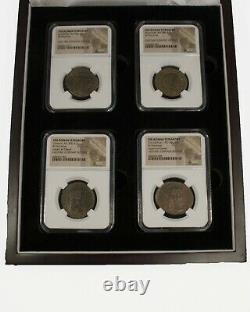 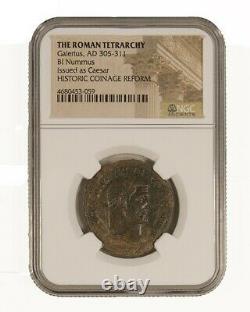 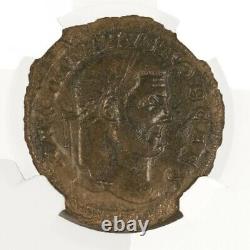 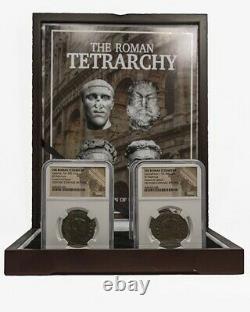 This set features four genuine ancient Roman bronze coins, issuedby the four original Tetrarchs. Diocletian (284-305), Maximian (286-310), Galerias (293-311), and Constantine I Chorus(293-306). The obverse of each coin features a portrait of the Emperor, often somewhat stylized, projecting an image of strength and toughness.

The various reverses feature mythological and military themes. All are certified by CNG. The Empire had been buffeted by 50 years of turmoil. A rapid succession of twenty emperors had vied for control of the empire, each being assassinated or dying in civil war.

Plagues ravaged the populace, and the borders of the empire were under constant assault by barbarian armies. The Empire was near collapse, and it took a manlike Diocletian--the son of freed slaves--to save it. Diocletian rose to the throne as many before him had done so, through the army. He instituted an innovative form of government, appointing a co-ruler, Maximian.

Each ruler the chose a Caesar, Diocletian choosing Galerius and Maximian choosing Constantius Chlorus (the father of Constantine The Great). The co-rulers quickly stabilized the empire, and secured its boarders. Diocletian instituted a vast economic reform, stabilizing Romes fragile economy. The four coins in this set are NGC slabbed and certified for authenticity. They are handsomely displayed in a wooden box, with a card describing the coins and the history of the Tetrarchy. The box measures 5.6 x 4.6 x1.6. The item "The Roman TetrarchyA Collection of Four NGC-Slabbed Coins With Display Box" is in sale since Thursday, February 28, 2019.

This item is in the category "Coins & Paper Money\Coins\ Ancient\Roman\ Imperial (27 BC-476 AD)". The seller is "genexs" and is located in Newburgh, New York. This item can be shipped to United States.