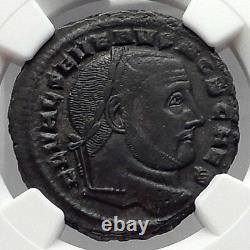 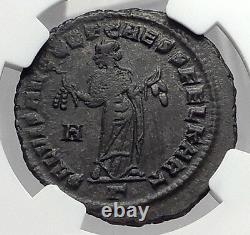 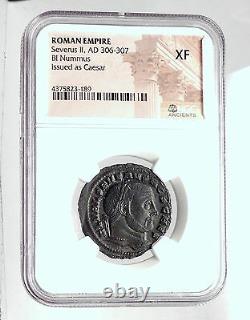 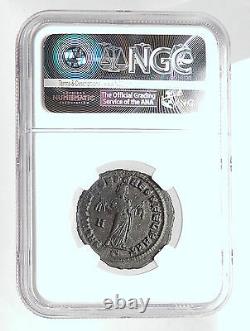 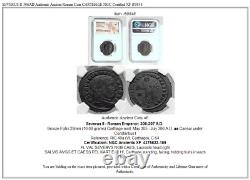 SALVIS AVGG ET CAESS FEL KART Exe: H/ G, Carthage standing, facing, holding fruits in each hand. The Genius was a protection spirit, analogous to the guardian angels invoked by the Church of Rome. The belief in such spirits existed in Greece and at Rome. The Greeks called them Daemons, and appear to have believed in them from the earliest times, though Homer does not mention them. Hesiod says that the Daemons were 30,000 in number, and that they dwelled on earth unseen by mortals, as the ministers of Zeus, and as the guardians of men and justice.

He further conceives them to be the souls of the righteous men who lived in the golden age of the world. The Greek philosophers took up this idea, and developed a complete theory of daemons. Thus we read in Plato, that daemons are assinged to men at the moment of their birth, that they accompany men through life, and after death conduct their souls to Hades. Pindar, in several passages of the spirit watching over the fate of man from the hour of his birth. The daemons are further described as ministers and companions of the gods, who carry the prayers of men to the gods, and the gifts of the gods to men, and accordingly float in immense numbers in the space between heaven and earth. There was also a distinct class of daemons, who were exclusively the ministers of the gods. The Romans seem to have received their notions respecting the genii from the Etruscans, though the name Genius itself is Latin (it is connected with gi-gn-o, gen-ui, and equivalent in meaning to generator or father). The genii of the Romans are the powers which produce life (dii genitales), and accompany man through it as his second or spiritual self. They were further not confined to man, but every living being, animal as well as man, and every place had its genius. Every human being at his birth obtained (sortitur) a genius, who he worshipped as sanctus et sanctissimus deus, especially on his birthday, with libations of wine, incense, and garlands of flowers.

The bridal bed was sacred to the genius, on account of his connection with generation, and the bed itself was called lectus genialis. On other merry occasions, also, sacrifices were offered to the genius, and to indulge in merriment was not unfrequently expressed by genio indulgere, genium curare, or placarae.

The whole body of the Roman people had its own genius, who is often seen represented on coins of Hadrian and Trajan. He was worshipped on sad as well as joyous occasions; thus, sacrifices were offered to him at the beginning of the 2nd year of the war with Hannibal. The genii are usually represented in works of art as winged beings.

The genius of a place appears in the form of a serpent eating fruit placed before him. Severus II (Latin : Flavius Valerius Severus Augustus ; died September 307), was a Western Roman Emperor from 306 to 307. After failing to besiege Rome, he fled to Ravenna. It is thought that he was killed there or executed near Rome.

Officer in the Roman army. Severus was of humble birth, born in Northern Illyria around the middle of the third century AD.

He rose to become a senior officer in the Roman army, and as an old friend of Galerius, that emperor ordered that Severus be appointed Caesar of the Western Roman Empire, a post that he succeeded to on 1 May 305. He thus served as deputy-emperor to Constantius I (Constantius Chlorus), Augustus of the western half of empire. On the death of Constantius I in Britain in the summer of 306, Severus was promoted to Augustus by Galerius, in opposition to the acclamation of Constantine I (Constantius' son) by his own soldiers. When Maxentius, the son of the retired emperor Maximian, revolted at Rome, Galerius sent Severus to suppress the rebellion. Severus moved towards Rome from his capital, Mediolanum, at the head of an army previously commanded by Maximian.

Fearing the arrival of Severus, Maxentius offered Maximian the co-rule of the empire. Maximian accepted, and when Severus arrived under the walls of Rome and besieged it, his men deserted to Maximian, their old commander.

Severus fled to Ravenna, an impregnable position. Maximian offered to spare his life and treat him humanely if he surrendered peaceably, which he did in March or April 307. Despite Maximian's assurance, Severus was nonetheless displayed as a captive and later imprisoned at Tres Tabernae. One belief is that when Galerius himself invaded Italy to suppress Maxentius and Maximian, the former ordered Severus's death, and that he was executed (or forced to commit suicide) on 16 September 307 at Tres Tabernae, near the current Cisterna di Latina.

Another belief is that Severus II was killed in Ravenna. Ilya Zlobin, world-renowned expert numismatist, enthusiast, author and dealer in authentic ancient Greek, ancient Roman, ancient Byzantine, world coins & more. Ilya Zlobin is an independent individual who has a passion for coin collecting, research and understanding the importance of the historical context and significance all coins and objects represent. Send me a message about this and I can update your invoice should you want this method.

You will be very happy with what you get with the COA; a professional presentation of the coin, with all of the relevant information and a picture of the coin you saw in the listing. Additionally, the coin is inside it's own protective coin flip (holder), with a 2x2 inch description of the coin matching the individual number on the COA. Whether your goal is to collect or give the item as a gift, coins presented like this could be more prized and valued higher than items that were not given such care and attention to. Is there a number I can call you with questions about my order? When should I leave feedback? Please don't leave any negative feedbacks, as it happens sometimes that people rush to leave feedback before letting sufficient time for their order to arrive. The matter of fact is that any issues can be resolved, as reputation is most important to me. My goal is to provide superior products and quality of service.

How and where do I learn more about collecting ancient coins? Visit the "Guide on How to Use My Store" for on an overview about using my store, with additional information and links to all other parts of my store which may include educational information on topics you are looking for. You may also want to do a YouTube search for the term "ancient coin collecting" for educational videos on this topic. This item is in the category "Coins & Paper Money\Coins: Ancient\Roman: Imperial (27 BC-476 AD)". The seller is "highrating_lowprice" and is located in this country: US.