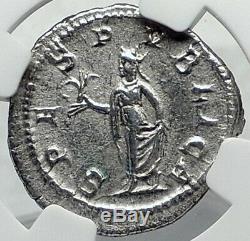 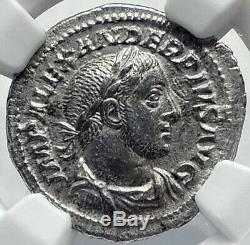 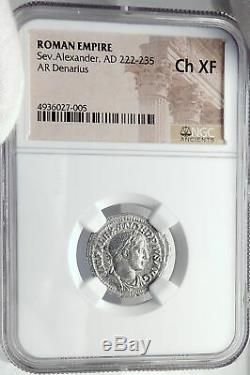 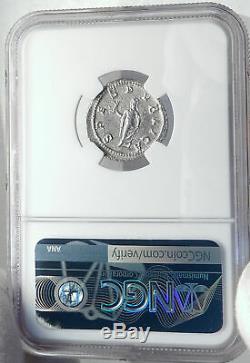 Item: i82228 Authentic Ancient Coin of. Silver Denarius 20mm (3.45 grams) Rome mint, struck 232 A. Reference: RIC IV 254; RSC 543; Certification: NGC Ancients. Ch XF 4936027-005 IMP ALEXANDER PIVS AVG, laureate, draped bust right, seen from front. SPES PVBLICA, Spes walking left, holding flower and raising skirt. The personification of Hope , was worshipped at Rome, where she had several temples, the most ancient of which had been built in B. 354, by the consul Atilius Calatinns, near the Porta Carmentalis. The Greeks also worshipped the personification of Hope, Elpis. And they relate the beautiful allegory, that when Epimetheus opened the vessel brought to him by Pandora, from which all manner of evils were scattered over the earth, Hope alone remained behind.

Hope was represented in works of art as a youthful figure, walking in full attire, holding in her right hand a flower, and with the left lifting up her garment. Severus Alexander (Latin: Marcus Aurelius Severus Alexander Augustus ; 1 October 208 - 19 March 235) was Roman Emperor from 222 to 235 and the last emperor of the Severan dynasty. He succeeded his cousin Elagabalus, upon the latter's assassination in 222, and was ultimately assassinated himself, marking the epoch event for the Crisis of the Third Century - nearly 50 years of civil wars, foreign invasion, and collapse of the monetary economy, though this last part is now disputed.

Alexander was the heir apparent to his cousin, the 18-year-old Emperor who had been murdered along with his mother Julia Soaemias, by his own guards, who, as a mark of contempt, had their remains cast into the Tiber river. He and his cousin were both grandsons of the influential and powerful Julia Maesa, who had arranged for Elagabalus' acclamation as emperor by the famous Third Gallic Legion. It was the rumor of Alexander's death that triggered the assassination of Elagabalus and his mother. As emperor, Alexander's peace time reign was prosperous. However, Rome was militarily confronted with the rising Sassanid Empire and growing incursions from the tribes of Germania.

He managed to check the threat of the Sassanids. But when campaigning against Germanic tribes, Alexander attempted to bring peace by engaging in diplomacy and bribery. This alienated many in the Roman Army and led to a conspiracy to assassinate and replace him.

Under the influence of his mother, Alexander did much to improve the morals and condition of the people, and to enhance the dignity of the state. He employed noted jurists to oversee the administration of justice, such as the famous jurist Ulpian. His advisers were men like the senator and historian Cassius Dio, and it is claimed that he created a select board of 16 senators, although this claim is disputed. He also created a municipal council of 14 who assisted the urban prefect in administering the affairs of the 14 districts of Rome.

Excessive luxury and extravagance at the imperial court were diminished, and he restored the Baths of Nero in 227 or 229; consequently, they are sometimes also known as the Baths of Alexander after him. Upon his accession he reduced the silver purity of the denarius from 46.5% to 43% - the actual silver weight dropped from 1.41 grams to 1.30 grams; however, in 229 he revalued the denarius, increasing the silver purity and weight to 45% and 1.46 grams, respectively. The following year he decreased the amount of base metal in the denarius while adding more silver, raising the silver purity and weight again to 50.5% and 1.50 grams. In religious matters, Alexander preserved an open mind. It is said that he was desirous of erecting a temple to Jesus but was dissuaded by the pagan priests.

He allowed a synagogue to be built in Rome, and he gave as a gift to this synagogue a scroll of the Torah known as the Severus Scroll. In legal matters, Alexander did much to aid the rights of his soldiers. He confirmed that soldiers could name anyone as heirs in their will, whereas civilians had strict restrictions over who could become heirs or receive a legacy. Alexander also confirmed that soldiers could free their slaves in their wills.

Additionally, he protected the rights of soldiers to their property when they were off on campaign and reasserted that a soldier's property acquired in or because of military service (his castrense peculium) could be claimed by no one else, not even the soldier's father. On the whole, Alexander's reign was prosperous until the rise, in the east, of the Sassanids under Ardashir I. Of the war that followed there are various accounts. According to Herodian, the Roman armies suffered a number of humiliating setbacks and defeats, while according to the Historia Augusta as well as Alexander's own dispatch to the Roman Senate, he gained great victories. Making Antioch his base, he marched at the head of his troops towards Ctesiphon, but a second army was destroyed by the Persians, and further losses were incurred by the retreating Romans in Armenia.

Nevertheless, although the Sassanids were checked for the time, the conduct of the Roman army showed an extraordinary lack of discipline. In 232 there was a mutiny in the Syrian legion, who proclaimed Taurinus emperor. Alexander managed to suppress the uprising, and Taurinus drowned while attempting to flee across the Euphrates.

Alexander's mother, Julia Mammaea, asked for Origen to tutor Alexander in Christianity. While Alexander was being educated in the Christian doctrines, the northern portion of his empire was being invaded by Germanic and Sarmatian tribes. A new and menacing enemy started to emerge directly after Alexander's success in the Persian war.

D 234, the barbarians crossed the Rhine and Danube in hordes that even caused panic at the gates of Rome. The soldiers serving under Alexander, who were already demoralized after their costly war against the Persians, were further discontented with their emperor when their homes were destroyed by the barbarian invaders.

As word of the invasion spread, the Emperor took the front line and went to battle against the Germanic invaders. The Romans prepared heavily for the war, building a brigade of ships to carry the entire battalion across. However, at this point in Alexander's career, he still knew little about being a general.

They considered him dishonorable and feared he was unfit to be Emperor. Under these circumstances the army swiftly looked to replace Alexander. Gaius Iulius Verus Maximinus was the next best option. He was a soldier from Thrace who had a golden reputation and was working hard to increase his military status. He was also a man with superior personal strength, who rose from peasantry to ultimately being the one chosen for the throne.

With the Thracian's hailing came the end of the Severan Dynasty. With Severus' own army growing with animosity and turning against him, the path for his assassination was paved. Alexander was forced to face his German enemies in the early months of 235. By the time he and his mother arrived, the situation had settled, and so his mother convinced him that to avoid violence, trying to bribe the German army to surrender was the more sensible course of action. According to historians, it was this tactic combined with insubordination from his own men that destroyed his reputation and popularity.

Pusillanimity was responsible for the revolt of Alexander's army, resulting in Severus' falling victim to the swords of his own men, following the nomination of Maximinus as emperor. Alexander was assassinated March 19, 235 together with his mother, in a mutiny of the Legio XXII Primigenia at Moguntiacum (Mainz) while at a meeting with his generals. These assassinations secured the throne for Maximinus. Lampridius documents two theories that elaborate on the Severus' assassination. The first claims that the disaffection of Mammaea was the main motive behind the homicide. However, Lampridius makes it clear that he is more supportive of an alternative theory, that Alexander was murdered in Sicilia (located in Britain). This theory has it that, in an open tent after his lunch, Alexander was consulting with his insubordinate troops, who compared him to his cousin Elagabalus, the divisive and unpopular Emperor whose own assassination paved the way for Alexander's reign. A German servant entered the tent and initiated the call for Alexander's assassination, at which point many of the troops joined in the attack. Alexander's attendants fought against the other troops but could not hold off the combined might of those seeking the Emperor's assassination. Within minutes, Alexander was dead. After Alexander's death his economic policies were completely discarded, and the Roman currency was devalued. This marked the beginning of the Crisis of the Third Century, a time period in which the Roman empire came close to falling apart entirely. World-renowned expert numismatist, enthusiast, author and dealer in authentic ancient Greek, ancient Roman, ancient Byzantine, world coins & more. Ilya Zlobin is an independent individual who has a passion for coin collecting, research and understanding the importance of the historical context and significance all coins and objects represent.

How and where do I learn more about collecting ancient coins? Visit the "Guide on How to Use My Store".

For on an overview about using my store, with additional information and links to all other parts of my store which may include educational information on topics you are looking for. The item "SEVERUS ALEXANDER Authentic Ancient Rome Silver Roman Coin SPES HOPE NGC i82228" is in sale since Wednesday, January 29, 2020. This item is in the category "Coins & Paper Money\Coins\ Ancient\Roman\ Imperial (27 BC-476 AD)". The seller is "highrating_lowprice" and is located in Rego Park, New York.