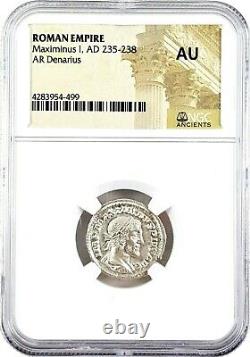 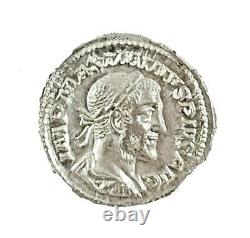 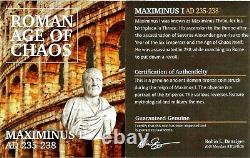 Roman Emperor Maximinus I Silver Denarius Coin NGC Certified AU With Story, Certificate. Maximinus Thrax came to power with the murder of the young Severus Alexander and his mother, whilst on campaign in Germany. He was of Thracian origin, hence the name Thrax and had risen to the position of legionary commander.

He is reported as being a giant of a man and appears on his coins with a prominent brow, nose, and jaw. His thumb was said to be so large that he wore his wife's bracelet as a ring for it. He died at Aquileia whilst attempting to put down a Senatorial revolt. Various pagan deities reflecting contemporary political, military, and religious themes.