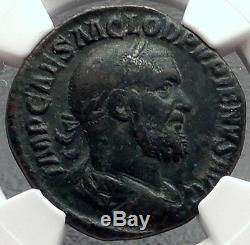 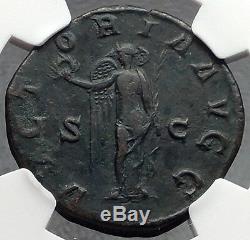 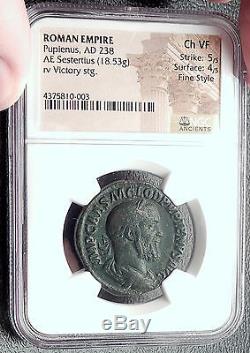 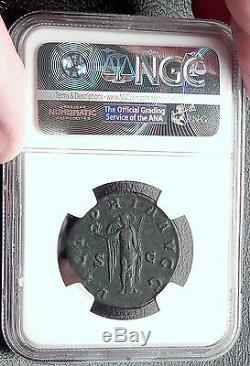 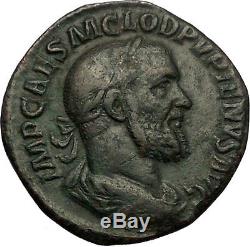 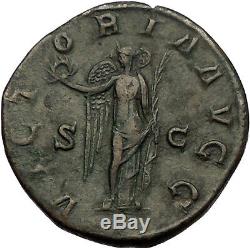 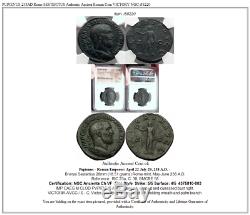 The goddess Vica Pota was also sometimes identified with Victoria. Unlike the Greek Nike , the goddess Victoria (Latin for "victory") was a major part of Roman society. Multiple temples were erected in her honor. When her statue was removed in 382 CE by Emperor Gratianus there was much anger in Rome.

She was normally worshiped by triumphant generals returning from war. Also unlike the Greek Nike, who was known for success in athletic games such as chariot races , Victoria was a symbol of victory over death and determined who would be successful during war. Victoria appears widely on Roman coins, jewelry, architecture, and other arts. She is often seen with or in a chariot , as in the late 18th-century sculpture representing Victory in a quadriga on the Brandenburg Gate in Berlin , Germany; " Il Vittoriano " in Rome has two.

Winged figures, very often in pairs, representing victory and referred to as "victories", were common in Roman official iconography, typically hovering high in a composition, and often filling spaces in spandrels or other gaps in architecture. These represent the spirit of victory rather than the goddess herself. They continued to appear after Christianization of the Empire, and slowly mutated into Christian angels. Marcus Clodius Pupienus Maximus Augustus. 165/170 29 July 238, also known as Pupienus Maximus , was Roman Emperor with Balbinus for three months in 238, during the Year of the Six Emperors. The sources for this period are scant, and thus knowledge of the emperor is limited. In most contemporary texts Pupienus is referred by his agnomen "Maximus" rather than by his cognomen (family name) Pupienus. The Historia Augusta , whose testimony is not to be trusted unreservedly, paints Pupienus as an example of advancement through the cursus honorum due to military success. It claims he was the son of a blacksmith , was adopted by one Pescennia Marcellina (otherwise unknown), and who started his career as a Centurio primus pilus before becoming a Tribunus Militum , and then a Praetor. He was in fact part of the aristocracy, albeit a minor one, and possibly quite recently. Hailing from the Etruscan city of Volterra , it has been speculated that Pupienus was the son of Marcus Pupienus Maximus , a Senator who was the first member of his family to enter the Senate, and wife Clodia Pulchra.

Pupienuss career was impressive, serving a number of important posts during the reign of the Severan dynasty throughout the late 2nd and early 3rd centuries. This included assignment as Proconsul of the senatorial propraetorial provinces of Bithynia et Pontus , Achaea , and Gallia Narbonensis. He was later assigned as imperial legatee to one of the German provinces, most probably after his first suffect consulship Sarmatians and German tribes. In 234, during the last years of Severus Alexander s reign, he was installed as Consul for the second time.

In that same year he was also appointed Urban Prefect. When Gordian I and his son were proclaimed Emperors in Africa, the Senate appointed a committee of twenty men, including the elderly Senator Pupienus, to co-ordinate operations against Maximinus until the arrival of the Gordians.

On the news of the Gordians' defeat and deaths, however, the Senate met in closed session in the Temple of Jupiter Capitolinus and voted for two members of the committee to be installed as co-emperors Pupienus and Balbinus. Unlike the situation in 161 with Marcus Aurelius and Lucius Verus , both emperors were elected as pontifices maximi , chief priests of the official cults. According to Edward Gibbon (drawing on the narratives of Herodian and the Historia Augusta), the choice was sensible, as. The mind of Maximus [Pupienus] was formed in a rougher mould [than that of Balbinus]. By his valour and abilities he had raised himself from the meanest origin to the first employments of the state and army.

His victories over the Sarmatians and the Germans, the austerity of his life, and the rigid impartiality of his justice whilst he was prefect of the city, commanded the esteem of a people whose affections were engaged in favour of the more amiable Balbinus. The two colleagues had both been consul... And, since the one was sixty and the other seventy-four years old, they had both attained the full maturity of age and experience.

However, factions within the Senate who had hoped to profit from the accession of the Gordians manipulated the people and the Praetorian Guard to agitate for the elevation of Gordian III as their imperial colleague. Balbinus, in the meantime, had failed to keep public order in the capital. The sources suggest that Balbinus suspected Pupienus of using his newly acquired German bodyguard to supplant him, and they were soon living in different parts of the Imperial palace. This meant that they were at the mercy of disaffected elements in the Praetorians, who resented serving under Senate-appointed emperors, and now plotted to kill them.

Pupienus, becoming aware of the threat, begged Balbinus to call for the German bodyguard. Balbinus, believing that this news was part of a plot by Pupienus to have him assassinated, refused, and the two began to argue just as the Praetorians burst into the room. Both emperors were seized and dragged back to the Praetorian barracks where they were tortured and brutally hacked to death. Pupienus had at least three children. His eldest son, Tiberius Clodius Pupienus Pulcher Maximus , was a Consul Suffectus c. 235, and patron of the town of Tibur outside Rome. His youngest son, Marcus Pupienus Africanus Maximus , was Consul Ordinarius in 236 as colleague of the Emperor Maximinus Thrax. This run of consulships in the family, across the reigns of Severus Alexander and Maximinus Thrax, show that the family was influential and in high favour. Pupienus also had a daughter, named Pupiena Sextia Paulina Cethegilla, wife of Marcus Ulpius Eubiotus Leurus. Ilya Zlobin, world-renowned expert numismatist, enthusiast, author and dealer in authentic ancient Greek, ancient Roman, ancient Byzantine, world coins & more. Ilya Zlobin is an independent individual who has a passion for coin collecting, research and understanding the importance of the historical context and significance all coins and objects represent.

Visit the "Guide on How to Use My Store" for on an overview about using my store, with additional information and links to all other parts of my store which may include educational information on topics you are looking for. You may also want to do a YouTube search for the term "ancient coin collecting" for educational videos on this topic. The item "PUPIENUS 238AD Rome SESTERTIUS Authentic Ancient Roman Coin VICTORY NGC i58220" is in sale since Tuesday, January 10, 2017. This item is in the category "Coins & Paper Money\Coins\ Ancient\Roman\ Imperial (27 BC-476 AD)". The seller is "highrating_lowprice" and is located in Rego Park, New York.