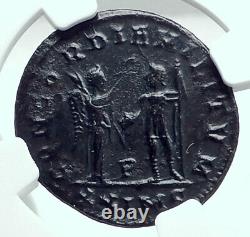 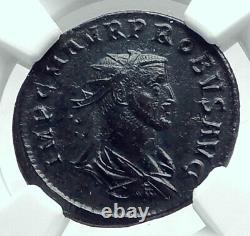 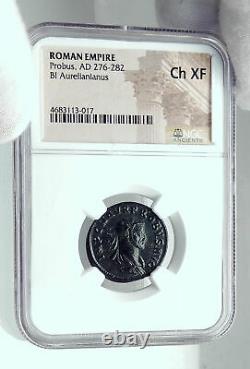 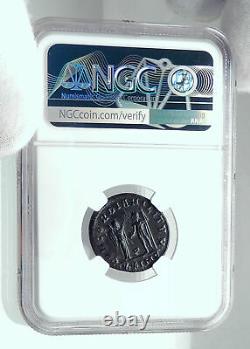 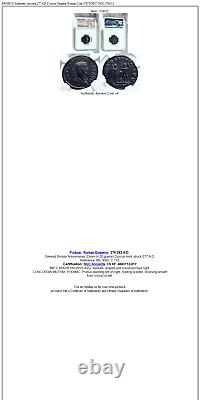 CONCORDIA MILITVM / P/XXIMC, Probus standing left on right, holding scepter, receiving wreath from Victory to left. In ancient Roman religion, Victoria or Victory was the personified goddess of victory. She is the Roman equivalent of the Greek goddess Nike, and was associated with Bellona.

She was adapted from the Sabine agricultural goddess Vacuna and had a temple on the Palatine Hill. The goddess Vica Pota was also sometimes identified with Victoria. Unlike the Greek Nike, the goddess Victoria (Latin for "victory") was a major part of Roman society. Multiple temples were erected in her honor.

When her statue was removed in 382 CE by Emperor Gratianus there was much anger in Rome. She was normally worshiped by triumphant generals returning from war. Also unlike the Greek Nike, who was known for success in athletic games such as chariot races, Victoria was a symbol of victory over death and determined who would be successful during war. Victoria appears widely on Roman coins, jewelry, architecture, and other arts.

She is often seen with or in a chariot, as in the late 18th-century sculpture representing Victory in a quadriga on the Brandenburg Gate in Berlin, Germany; "Il Vittoriano" in Rome has two. Winged figures, very often in pairs, representing victory and referred to as "victories", were common in Roman official iconography, typically hovering high in a composition, and often filling spaces in spandrels or other gaps in architecture. These represent the spirit of victory rather than the goddess herself.

They continued to appear after Christianization of the Empire, and slowly mutated into Christian angels. Probus Latin: Marcus Aurelius Probus Augustus ; c. 19 August 232 - September/October 282, was Roman Emperor from 276 to 282. During his reign, the Rhine and Danube frontier was strengthened after successful wars against several Germanic tribes such as the Goths, Alamanni, Longiones, Franks, Burgundians, and Vandals. The Agri Decumates and much of the Limes Germanicus in Germania Superior were officially abandoned during his reign, with the Romans withdrawing to the Rhine and Danube rivers.

Born in 232 in Sirmium (modern day Sremska Mitrovica), Pannonia Inferior, the son of Dalmatius. Probus entered the army around 250 upon reaching adulthood. Appointed as a military tribune by the emperor Valerian, he later distinguished himself under the emperors Aurelian and Tacitus. He was appointed governor of the East by Tacitus, whose death in 276 prompted Probus' soldiers to proclaim him emperor.

Florianus, the half-brother of Tacitus, was also proclaimed successor by his soldiers, but he was killed after an indecisive campaign. Probus travelled west, defeating the Goths along the lower Danube in 277, and acquiring the title of Gothicus. His position as emperor was ratified by the Senate around this time. Sculpted head of Probus from Brescia in northern Italy. In 278, Probus campaigned successfully in Gaul against the Alamanni and Longiones; both tribes had advanced through the Neckar valley and across the Rhine into Roman territory.

Meanwhile, his generals defeated the Franks and these operations were directed to clearing Gaul of Germanic invaders (Franks and Burgundians), allowing Probus to adopt the titles of Gothicus Maximus and Germanicus Maximus. One of his principles was never to allow the soldiers to be idle, and to employ them in time of peace on useful works, such as the planting of vineyards in Gaul, Pannonia and other districts, in order to restart the economy in these devastated lands.

Of a greater and more lasting significance, Probus began the strategy of settling the Germanic tribes in the devastated provinces of the empire. In 279-280, Probus was, according to Zosimus, in Raetia, Illyricum and Lycia, where he fought the Vandals.

In the same years, Probus' generals defeated the Blemmyes in Egypt. Probus then ordered the reconstruction of bridges and canals along the Nile, where the production of grain for the Empire was centered.

In 280-281, Probus put down three usurpers, Julius Saturninus, Proculus and Bonosus. The extent of these revolts is not clear, but there are clues that they were not just local problems (an inscription with the name of Probus erased has been found as far as Spain). In 281, the emperor was in Rome, where he celebrated his triumph. Probus was eager to start his eastern campaign, delayed by the revolts in the west. He left Rome in 282, travelling first towards Sirmium, his birth city.

Different accounts of Probus's death exist. According to Joannes Zonaras, the commander of the Praetorian Guard Marcus Aurelius Carus had been proclaimed, more or less unwillingly, emperor by his troops. Probus sent some troops against the new usurper, but when those troops changed sides and supported Carus, Probus' remaining soldiers assassinated him at Sirmium (September/October 282).

According to other sources, however, Probus was killed by disgruntled soldiers, who rebelled against his orders to be employed for civic purposes, like draining marshes. Carus was proclaimed emperor after Probus' death and avenged the murder of his predecessor. World-renowned expert numismatist, enthusiast, author and dealer in authentic ancient Greek, ancient Roman, ancient Byzantine, world coins & more. Ilya Zlobin is an independent individual who has a passion for coin collecting, research and understanding the importance of the historical context and significance all coins and objects represent. Send me a message about this and I can update your invoice should you want this method.

Getting your order to you, quickly and securely is a top priority and is taken seriously here. Great care is taken in packaging and mailing every item securely and quickly. What is a certificate of authenticity and what guarantees do you give that the item is authentic? You will be very happy with what you get with the COA; a professional presentation of the coin, with all of the relevant information and a picture of the coin you saw in the listing. Additionally, the coin is inside it's own protective coin flip (holder), with a 2x2 inch description of the coin matching the individual number on the COA. Whether your goal is to collect or give the item as a gift, coins presented like this could be more prized and valued higher than items that were not given such care and attention to. When should I leave feedback? Please don't leave any negative feedbacks, as it happens sometimes that people rush to leave feedback before letting sufficient time for their order to arrive.