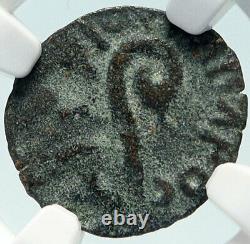 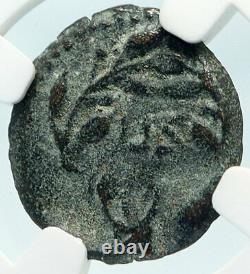 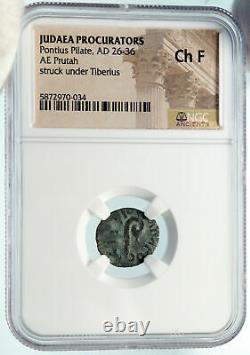 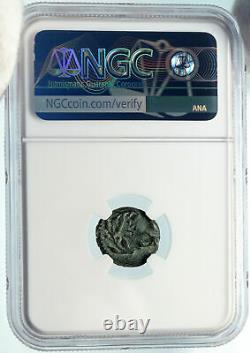 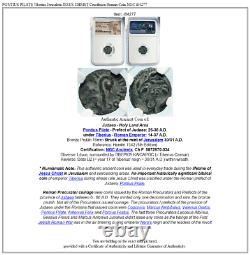 An important historically significant biblical coin of emperor Tiberius. During whose rule Jesus Christ was crucified under the Roman prefect of Judaea, Pontius Pilate. Roman Procurator coinage were coins issued by the Roman Procurators and Prefects of the province of Judaea. Between 6 - 66 A.

They minted only one denomination and size, the bronze prutah. Not all of the Procurators issued coinage. The procurators / prefects of the province of Judaea under the Romans that issued coins were Coponius. The last three Procurators Lucceius Albinus, Gessius Florus and Marcus Antonius Julianus didn't issue any coins as the tidings of the First Jewish-Roman War. Was in the air brewing during emperor Nero's.

Pontius Pilatus known in the English-speaking world as Pontius Pilate was the fifth Prefect of the Roman province of Judaea, from AD 26-36. He is best known as the judge at Jesus' trial and the man who authorized the crucifixion of Jesus. As prefect, he served under Emperor Tiberius.

Pilate avoids responsibility for the death of Jesus. In the Gospel of Matthew, Pilate washes his hands to show that he was not responsible for the execution of Jesus and reluctantly sends him to his death. The Gospel of Mark, depicting Jesus as innocent of plotting against the Roman Empire. In the Gospel of Luke, Pilate not only agrees that Jesus did not conspire against Rome, but Herod Antipas, the Tetrarch of Galilee, also finds nothing treasonable in Jesus' actions. We find in the Gospel of John, Pilate states "I find no guilt in him [Jesus]" and he asks the Jews if Jesus should be released from custody. Pontius Pilate's title was traditionally thought to have been procurator, since Tacitus speaks of him as such. Pilate could command legionary forces but only small ones, and so in military situations, he would have to yield to his superior, the legate of Syria, who would descend into Palestine with his legions as necessary.

As governor of Iudaea, Pilate would have small auxiliary forces of locally recruited soldiers stationed regularly in Caesarea and Jerusalem. The total number of soldiers at his disposal numbered in the range of 3000.

According to the canonical Christian Gospels, Pilate presided at the trial of Jesus and, despite stating that he personally found him not guilty of a crime meriting death, handed him over to crucifixion. Jesus was brought to Pilate by the Sanhedrin, who had arrested Jesus and questioned him themselves. Pilate's main question to Jesus was whether he considered himself to be the King of the Jews in an attempt to assess him as a potential political threat. Are you the king of the Jews? "It is as you say", Jesus replied.

Pilate appears to have been reluctant to allow the crucifixion of Jesus, finding no fault with him. Even Pilate's wife spoke to him on Jesus' behalf. It was the custom of the Roman governor to release one prisoner at Passover. Pilate brought out Barabbas a murderer, and told the crowd to choose between releasing Barabbas or Jesus as per the custom, in the hopes of getting them to request the release of Jesus.

However, the crowd demanded the release of Barabbas and said of Jesus, Crucify him! What evil has he done? " The crowd continued shouting, "Crucify him!

Gospel of John gives more detail about that dialogue taking place between Jesus and Pilate. Jesus seems to confirm the fact of his kingship, although immediately explaining, that "[his] kingdom [was] not of this world"; of far greater importance for the followers of Christ is his own definition of the goal of his ministry on earth at the time. Jesus thus describes his mission: came into the world... To bear witness to the truth ; and all who are on the side of truth listen to [my] voice", to which Pilate famously replied, "What is truth? In all gospel accounts, Pilate is reluctant to condemn Jesus, but is eventually forced to give in when the crowd becomes unruly and he was reminded that Jesus's claim to be king is a challenge to Roman rule and to the Roman deification of Caesar.

Pilate's term as prefect of Judaea ended after an incident recounted by Josephus. A large group of Samaritans had been persuaded by an unnamed man to go to Mount Gerizim in order to see sacred artifacts allegedly buried by Moses. But at a village named Tirathana, before the crowd could ascend the mountain, Pilate sent in a detachment of cavalry and heavy-armed infantry, who in an encounter with the firstcomers in the village slew some in a pitched battle and put the others to flight.

Many prisoners were taken, of whom Pilate put to death the principal leaders and those who were most influential. The Samaritans then complained to Vitellius, Roman governor of Syria, who sent Pilate to Rome to explain his actions regarding this incident to Tiberius. However, by the time Pilate got to Rome, Tiberius had died. Pilate fell under misfortunes in the reign of Caligula (37-41), was exiled to Gaul and eventually committed suicide there in Vienne.

His body was thrown first into the Tiber, but the waters were so disturbed by evil spirits that the body was taken to Vienne and sunk in the Rhône: a monument at Vienne, called Pilate's tomb, is still to be seen. As the waters of the Rhone likewise rejected Pilate's corpse, it was again removed and sunk in the lake at Lausanne. In some Eastern Orthodox traditions, Pilate committed suicide out of remorse for having sentenced Jesus to death.

Judea (Latin: IVDAEA), sometimes spelled in its original Latin forms of Judæa , Judaea or Iudaea to distinguish it from Judea proper, is a term used by historians to refer to the Roman province that incorporated the geographical regions of Judea, Samaria, and Idumea, and which extended over parts of the former regions of the Hasmonean and Herodian kingdoms of Israel. It was named after Herod Archelaus's Tetrarchy of Judea, of which it was an expansion, the latter name deriving from the Kingdom of Judah of the 6th century BCE. Rome's involvement in the area dated from 63 BCE, following the end of the Third Mithridatic War, when Rome made Syria a province. In that year, after the defeat of Mithridates VI of Pontus, the proconsul Pompeius Magnus (Pompey the Great) sacked Jerusalem and entered the Jerusalem Temple.

Subsequently, during the 1st century BCE, the Herodian Kingdom was established as a Roman client kingdom and then in 6 CE parts became a province of the Roman Empire. Judea province was the scene of unrest at its founding during the Census of Quirinius and several wars were fought in its history, known as the Jewish-Roman wars. The Temple was destroyed in 70 as part of the Great Jewish Revolt resulting in the institution of the Fiscus Judaicus, and after Bar Kokhba's revolt (132-135 CE), the Roman Emperor Hadrian changed the name of the province to Syria Palaestina and Jerusalem to Aelia Capitolina , which certain scholars conclude was done in an attempt to remove the relationship of the Jewish people to the region. World-renowned expert numismatist, enthusiast, author and dealer in authentic ancient Greek, ancient Roman, ancient Byzantine, world coins & more. Ilya Zlobin is an independent individual who has a passion for coin collecting, research and understanding the importance of the historical context and significance all coins and objects represent.

Visit the Guide on How to Use My Store. For on an overview about using my store, with additional information and links to all other parts of my store which may include educational information on topics you are looking for. The item "PONTIUS PILATE Tiberius Jerusalem JESUS CHRIST Crucifixion Roman Coin NGC i84277" is in sale since Wednesday, June 3, 2020. This item is in the category "Coins & Paper Money\Coins\ Ancient\Greek (450 BC-100 AD)".