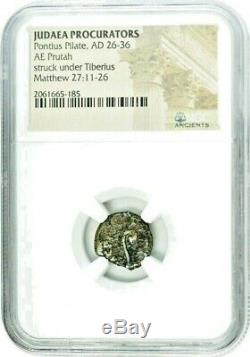 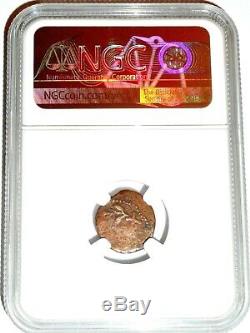 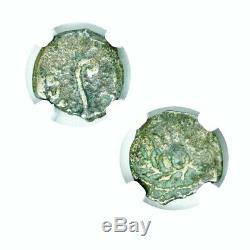 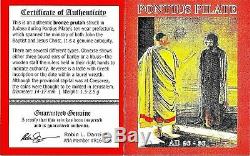 Pontius Pilate Bronze Prutah Coin Under Emperor Tiberius NGC Certified, With Story Card Certificate. Pilate was a Roman governor, or prefect, from 26 to 36 C. He issued a small number of bronze prutah coins during a three year period. He is most famous for presiding at the trial of Jesus Christ of Nazareth and sentencing him to die by crucifixion, an event that was destined to fundamentally alter the course of human history.

To this day, 2000 years later, the ongoing significance of that event cannot be overstated. While we are certain about his coins, other aspects of Pontius Pilates legacy are less well known. For most of two millennia historians and theologians have debated the facts of Pontius Pilate's actions, words, motivations and sentiments during his tenure as governor, especially the exact extent of Pilate's role and his level of responsibility for Jesus' condemnation.