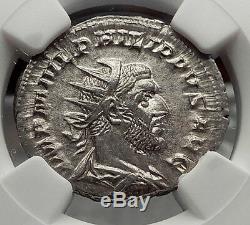 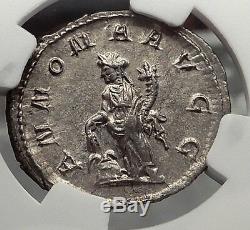 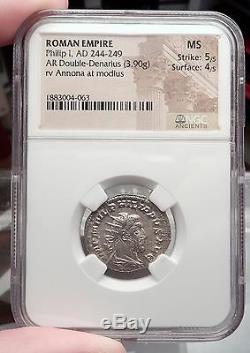 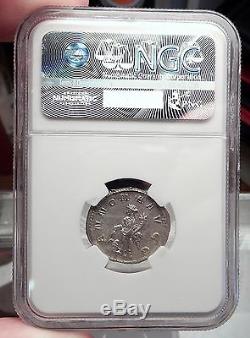 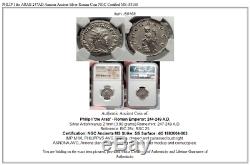 Reference: RIC 28c; RSC 25 Certification: NGC Ancients MS Strike: 5/5 Surface: 4/5 1883004-063 IMP M IVL PHILIPPVS AVG, radiate, draped and cuirassed bust right. ANNONA AVG, Annona standing left holding corn-ears over modius and cornucopiae. In ancient Roman religion , Annona (Latin corn, grain; means of subsistence, from annus "year") is the divine personification of the grain supply to the city of Rome. She is closely connected to the goddess Ceres , with whom she is often depicted in art. Annona, often as Annona Augusti , was a creation of Imperial religious propaganda , manifested in iconography and cult practice.

She is presented as a theophany of the emperor's power to care for his people through the provision of grain. Annona thus lacked narrative mythology or a tradition of devotion in the Roman Republic , but once established as part of Imperial cult , she was the recipient of dedications and votive offerings from private individuals motivated by gratitude or the seeking of favor. In the propaganda of Claudius , the cult of Ceres Augusta made explicit the divine power that lay in the Imperial provision of the annona , the grain supply to the city. Annona Augusti appears on coins late in the reign of Nero , when the Cult of Virtues came into prominence in the wake of the Pisonian conspiracy. She embodied two of the material benefits of Imperial rule , along with Securitas Augusti, "Augustan Security, " and often appeared as part of a pair with Ceres. On Neronian coinage, Ceres, Annona, and Abundantia ("Abundance") were closely associated.

Annona also appears on coins issued under Vespasian , where along with other Virtues she represents the restoration of confidence in the principate , and on the coinage of Titus , Domitian , Trajan , Hadrian , Antoninus Pius , and Septimius Severus. She was a particular favorite in Trajan's propaganda, which sought to portray his reign as a renewal and a prosperous new era for mankind; hence Annona often appears with a symbolic child. In the context of Trajanic politics, Annona represented Rome's grain independence from its traditional supplier Egypt.

On coins, she frequently stands between a modius (grain-measure) and the prow of a galley , with ears of grain in one hand and a cornucopia in the other; sometimes she holds a rudder or an anchor. Philip I'the Arab' - Emperor: 244-249 A. Marcus Julius Philippus or Philippus I Arabs c. 204249, known in English as Philip the Arab or formerly (prior to World War II) in English as Philip the Arabian , was a Roman Emperor from 244 to 249. Little is known about Philip's early life and political career. He was born in Shahba , about 55 miles southeast of Damascus , in the Roman province of Syria. Philip has the nickname "the Arab" because he had family who had originated in the Arabian peninsula , believed to be distant descendants of the prestigious Baleed family of Aleppo. Philip was the son of a Julius Marinus, a local Roman citizen, possibly of some importance.

Many historians agree that he was of Arab descent who gained Roman citizenship through his father, a man of considerable influence. Many citizens from the provinces took Roman names upon acquiring citizenship. This makes tracing his Arabic blood line difficult.

However, it is documented that Rome used the Ghassan tribe from the Azd of Yemen as vassals to keep the neighboring northern Arabs in check. The name of Philip's mother is unknown, but sources refer to a brother, Gaius Julius Priscus , a member of the Praetorian guard under Gordian III (238244). In 234, Philip married Marcia Otacilia Severa , daughter of a Roman Governor. They had two children: a son named Marcus Julius Philippus Severus (Philippus II) in 238 and according to numismatic evidence they had a daughter called Julia Severa or Severina, whom the ancient Roman sources don't mention.

In 243, during Gordian III's campaign against Shapur I of Persia, the Praetorian prefect Timesitheus died under unclear circumstances. At the suggestion of his brother Priscus, Philip became the new Praetorian prefect, with the intention that the two brothers would control the young Emperor and rule the Roman world as unofficial regents. Following a military defeat, Gordian III died in 244 under circumstances that are still debated.

While some claim that Philip conspired in his murder, other accounts (including one coming from the Persian point of view) state that Gordian died in battle. Whatever the case, Philip assumed the purple following Gordian's death.

His rise from so obscure a station to the first dignities of the empire seems to prove that he was a bold and able leader. But his boldness prompted him to aspire to the throne, and his abilities were employed to supplant, not to serve, his indulgent master.

Philip was not willing to repeat the mistakes of previous claimants, and was aware that he had to return to Rome in order to secure his position with the senate. He thus travelled west, after concluding a peace treaty with Shapur I, and left his brother Priscus as extraordinary ruler of the Eastern provinces. In Rome he was confirmed Augustus , and nominated his young son Caesar and heir. Philip's rule started with yet another Germanic incursion on the provinces of Pannonia and the Goths invaded Moesia (modern-day Serbia and Bulgaria) in the Danube frontier.

They were finally defeated in the year 248, but the legions were not satisfied with the result, probably due to a low share of the plunder, if any. Rebellion soon arose and Tiberius Claudius Pacatianus was proclaimed emperor by the troops.

The uprising was crushed and Philip nominated Gaius Messius Quintus Decius as governor of the province. Future events would prove this to be a mistake. Pacatianus' revolt was not the only threat to his rule: in the East, Marcus Jotapianus led another uprising in response to the oppressive rule of Priscus and the excessive taxation of the Eastern provinces.

Two other usurpers, Marcus Silbannacus and Sponsianus , are reported to have started rebellions without much success. , Philip had the honour of leading the celebrations of the one thousandth birthday of Rome, which according to tradition was founded in 753 BC by Romulus.

He combined the anniversary with the celebration of Rome's alleged tenth saeculum. According to contemporary accounts, the festivities were magnificent and included spectacular games, ludi saeculares , and theatrical presentations throughout the city. In the coliseum, more than 1,000 gladiators were killed along with hundreds of exotic animals including hippos, leopards, lions, giraffes, and one rhinoceros. The events were also celebrated in literature, with several publications, including Asinius Quadratus's History of a Thousand Years , specially prepared for the anniversary.

Despite the festive atmosphere, discontent in the legions was growing. Decius (249251) was proclaimed Emperor by the Danubian armies in the spring of 249 and immediately marched to Rome. Philip's army met the usurper near modern Verona that summer. Decius won the battle and Philip was killed sometime in September 249, either in the fighting or assassinated by his own soldiers who were eager to please the new ruler. Philip's eleven-year-old son and heir may have been killed with his father and Priscus disappeared without a trace.

Further information: Philip the Arab and Christianity. Some later traditions, first mentioned in the historian Eusebius in his Ecclesiastical History , held that Philip was the first Christian Roman emperor.

This tradition seems to be based on reports in Eusebius that Philip allegedly had once entered a Christian service on Easter, after having been required by a bishop to confess his sins. Later versions located this event in Antioch. However, historians generally identify the later Emperor Constantine, baptised on his deathbed, as the first Christian emperor, and generally describe Philip's adherence to Christianity as dubious, because non-Christian writers do not mention the fact, and because throughout his reign, Philip to all appearances coinage, etc. Continued to follow the state religion. Critics ascribe Eusebius' claim as probably due to the tolerance Philip showed towards Christians. Saint Quirinus of Rome was, according to a legendary account, the son of Philip the Arab. Ilya Zlobin, world-renowned expert numismatist, enthusiast, author and dealer in authentic ancient Greek, ancient Roman, ancient Byzantine, world coins & more.

How and where do I learn more about collecting ancient coins? Visit the "Guide on How to Use My Store" for on an overview about using my store, with additional information and links to all other parts of my store which may include educational information on topics you are looking for. You may also want to do a YouTube search for the term "ancient coin collecting" for educational videos on this topic. The item "PHLIP I the ARAB 247AD Annona Ancient Silver Roman Coin NGC Certified MS i58168" is in sale since Wednesday, December 7, 2016. This item is in the category "Coins & Paper Money\Coins\ Ancient\Roman\ Imperial (27 BC-476 AD)".