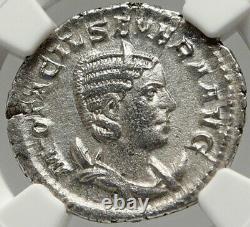 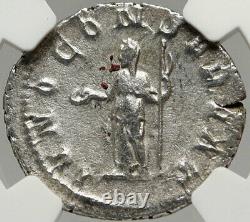 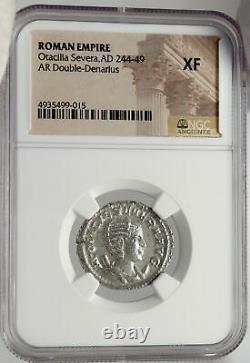 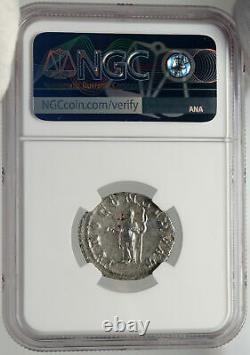 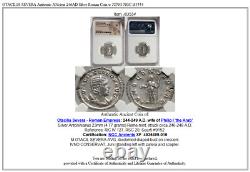 Item: i83554 Authentic Ancient Coin of. Wife of Philip I'the Arab. Silver Antoninianus 23mm (4.77 grams) Rome mint, struck circa 246-248 A. Reference: RIC IV 127, RSC 20; Sear5 #9152 Certification: NGC Ancients. XF 4935499-015 M OTACIL SEVERA AVG, diademed draped bust on crescent. IVNO CONSERVAT, Juno standing left with patera and scepter. Juno, called Hera by the Greeks. The word Ju-no contains the same root as Ju-piter. As Jupiter is the king of heaven and of the gods, so Juno is the queen of heaven, or the female Jupiter. She was worshipped at Rome as the queen of heaven, from early times, with the surname of Regina. At a later period her worship was solemnly transferred from Veii to Rome, where a sanctuary was dedicated to her on the Aventine. As Jupiter was the protector of the male sex, so Juno watched over the female sex. She was supposed to accompany every woman through life, from the moment of her birth to her death.

Hence she bore the special surnames of Virginalis and Matrona, as well as the general ones of Opigena and Sospita and under the last mentioned name she was worshipped at Lanuvium. On their birthday, women offered sacrifices to Juno surnamed Natatlis, just as men sacrificed to their genius natalis. The great festival, celebrated by all the women, in honour of Juno, was called Matronalia, and took place on the 1st of March.

Her protection of women, and especially her power of making them fruitful, is further alluded to in the festival Populifugia, as well as in the surname of Februlis, Februata, Februta, or Februalis. Juno was further, like Saturn, the guardian of the finances, and under the name of Moneta she had a temple on the Capitoline hill, which contained the mint.

The most important period in a woman's life is that of her marriage, and she was therefore believed especially to preside over marriage. Hence she was called Juga or Jugalis, and had a variety of other names, such as Pronuba, Cinxia. The month of June, which is said to have been originally called Junonius, was considered to be the most favourable period for marrying.

Women in childbed invoked Juno Lucina to help them, and newly-born children were likewise under her protection : hence she was sometimes confounded with the Greek Artemis or Ilithyia. In Etruria she was worshipped under the name of Cupra. She was also worshipped at Falerii, Lanuvium, Aricia, Tibur, Praeneste, and other places. In the representations of the Roman Juno that have come down to us, the type of the Greek Hera is commonly adopted. Marcia Otacilia Severa or Otacilia Severa was the Empress of Rome and wife of Emperor Marcus Julius Philippus or Philip the Arab who reigned over the Roman Empire from 244 to 249. Severa was a member of the ancient gens Otacilius who were people of consular and senatorial rank. Severa's father was Otacilius Severus or Severianus, who served as Roman Governor of Macedonia and Moesia, while her mother was a member of gens Marcius or was related to the gens.

According to sources she had a brother called Severianus, who served as Roman Governor of Lower Moesia between 246-247. Little is known on her life before marrying Philip. In 234, Severa married Philip who served in the Praetorian Guard under Emperor Alexander Severus.

Severa had two children with Philip: a son named Marcus Julius Philippus Severus or Philippus II (born in 238) and - according to numismatic evidence - a daughter called Julia Severa or Severina, who is never mentioned by the ancient Roman sources. In February 244, Gordian III was killed in Mesopotamia. There is a possibility that Severa was involved in a conspiracy to murder Gordian.

Philip gave Severa the honorific title of Augusta. Their son was made heir of the purple. Sometimes Severa and Philip are considered as the first Christian imperial couple, because during their reign the persecutions of Christians had ceased and the couple had become tolerant towards the faith of the Christians. Through her intervention, she saved Bishop and Saint Babylas of Antioch from persecution. In August 249, Philip had died in battle in Verona and Decius (emperor) became the new emperor.

Severa was in Rome that time. When the news of Philip's death had reached Rome, Severa's son was murdered by the Praetorian Guard. The child died in her arms. Severa survived her husband and son and lived later in obscurity. Her later life is unknown.

How and where do I learn more about collecting ancient coins? Visit the Guide on How to Use My Store. For on an overview about using my store, with additional information and links to all other parts of my store which may include educational information on topics you are looking for. This item is in the category "Coins & Paper Money\Coins: Ancient\Roman: Imperial (27 BC-476 AD)".