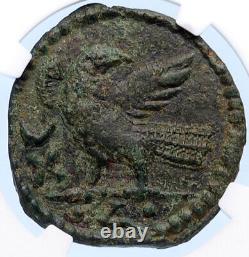 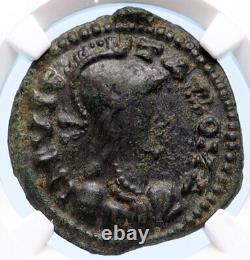 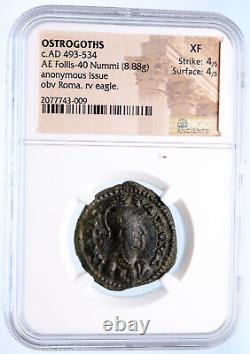 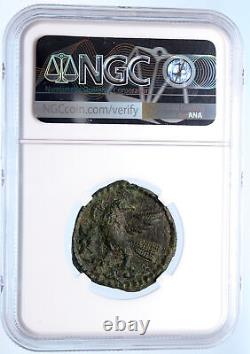 The Ostrogoths traced their origins to the Greutungi - a branch of the Goths who had migrated southward from the Baltic Sea and established a kingdom north of the Black Sea, during the 3rd and 4th centuries. They built an empire stretching from the Black Sea to the Baltic. The Ostrogoths were probably literate in the 3rd century, and their trade with the Romans was highly developed. Their Danubian kingdom reached its zenith under King Ermanaric, who is said to have committed suicide at an old age when the Huns attacked his people and subjugated them in about 370. After their annexation by the Huns, little is heard of the Ostrogoths for about 80 years, after which they reappear in Pannonia on the middle Danube River as federates of the Romans.

After the collapse of the Hun empire after the Battle of Nedao (453), Ostrogoths migrated westwards towards Illyria and the borders of Italy, while some remained in the Crimea (where the Crimean Ostrogoths existed as a distinct people until at least the 16th century). During the late 5th and 6th centuries, under Theodoric the Great most of the Ostrogoths moved first to Moesia c. 475-488 and later conquered the Kingdom of Italy of the Germanic warrior Odoacer. In 493, Theodoric the Great established a kingdom in Italy. A period of instability then ensued, tempting the Eastern Roman Emperor Justinian to declare war on the Ostrogoths in 535 in an effort to restore the former western provinces of the Roman Empire.

Initially, the Byzantines were successful, but under the leadership of Totila, the Goths reconquered most of the lost territory until Totila's death at the Battle of Taginae. The war lasted for almost 20 years and caused enormous damage and depopulation of Italy. The remaining Ostrogoths were absorbed into the Lombards who established a kingdom in Italy in 568. The Ostrogothic Kingdom, officially the Kingdom of Italy (Latin: Regnum Italiae), was established by the Ostrogoths in Italy and neighbouring areas from 493 to 553.

In Italy the Ostrogoths, led by Theoderic the Great, killed and replaced Odoacer, a Germanic soldier, erstwhile-leader of the foederati in Northern Italy, and the de facto ruler of Italy, who had deposed the last emperor of the Western Roman Empire, Romulus Augustulus, in 476. Under Theoderic, its first king, the Ostrogothic kingdom reached its zenith, stretching from modern France in the west into modern Serbia in the southeast. Most of the social institutions of the late Western Roman Empire were preserved during his rule. Theodoric called himself Gothorum Romanorumque rex ("King of the Goths and Romans"), demonstrating his desire to be a leader for both peoples.

How and where do I learn more about collecting ancient coins? Visit the Guide on How to Use My Store. For on an overview about using my store, with additional information and links to all other parts of my store which may include educational information on topics you are looking for. This item is in the category "Coins & Paper Money\Coins: Ancient\Roman: Imperial (27 BC-476 AD)". The seller is "highrating_lowprice" and is located in this country: US. This item can be shipped worldwide.