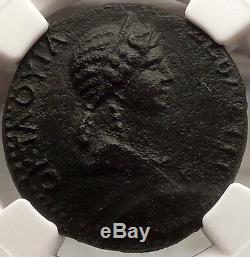 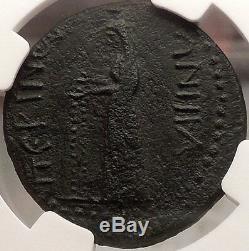 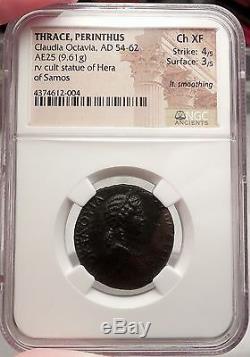 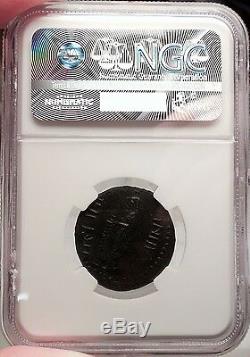 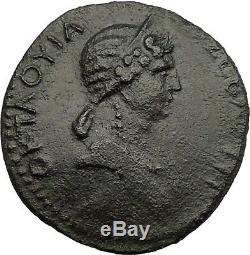 Asteroid 598 Octavia is named after her. Octavia was the only daughter of the Emperor Claudius by his third marriage to his second cousin Valeria Messalina. She was named for her great-grandmother Octavia the Younger, the second eldest and full-blooded sister of the Emperor Augustus.

Her elder half-sister was Claudia Antonia, Claudius's daughter through his second marriage to Aelia Paetina, and her full sibling was Britannicus, Claudius's son with Messalina. She was born in Rome. As a young girl, her father betrothed her to future praetor Lucius Junius Silanus Torquatus, who was a descendant of Augustus.

Octavia's mother was executed in 48, for conspiring to murder her father. Claudius later remarried her paternal first cousin and his own niece Agrippina the Younger. Agrippina the Younger had a son from her first marriage: Nero (at that time known as Lucius Domitius Ahenobarbus). Agrippina, through her plotting and manipulating, ended the engagement between Octavia and Lucius Silanus and persuaded Claudius to adopt Nero as his son and heir and arranged for Octavia and Nero to marry on 9 June 53. Claudius died on 13 October 54 and Nero acceded to the throne, possibly poisoning Octavia's full brother Britannicus in early 55 in order to do so.

Tacitus states that from this moment Octavia became very unhappy, but learned to hide her affections and feelings around her husband and stepbrother. Octavia was caught up in the power struggles between Nero and his mother, which concluded when Nero murdered his mother in March 59.

Although she was admired as empress by the Roman citizen body, the marriage was unhappy. Octavia was an'aristocratic and virtuous wife' (in Tacitus's words), whereas Nero hated her and grew bored with her (according to both Tacitus and Suetonius), trying on several occasions to strangle her (according to Suetonius) and having affairs with a freedwoman called Claudia Acte and then with Poppaea Sabina.

He excused this treatment of her when at one point his friends showed their concerns about it. When Poppaea became pregnant with Nero's child, Nero divorced Octavia, claiming she was barren, and married Poppaea twelve days after the divorce. Banishment by Nero and Poppaea and death. Nero and Poppaea then banished Octavia to the island of Pandateria (modern Ventotene) on a false charge of adultery. When Octavia complained about this treatment, her maids were tortured to death. Octavia's banishment became so unpopular that the citizens of Rome protested loudly, openly parading through the streets with statues of Octavia decked with flowers and calling for her return. Nero (badly frightened) nearly agreed to remarry Octavia, but instead he signed her death warrant. A few days later, Octavia was bound and her veins were opened in a traditional Roman suicide ritual. She was suffocated in an exceedingly hot vapor bath.

Octavia's head was cut off and sent to Poppaea. Her death brought much sorrow to Rome. According to Suetonius, years later Nero would have nightmares about his mother and Octavia.

The item "OCTAVIA, wife of Nero. Authentic Roman Coin Certified NGC Choice XF" is in sale since Friday, March 15, 2013. This item is in the category "Coins & Paper Money\Coins\ Ancient\Roman\ Imperial (27 BC-476 AD)". The seller is "victoram" and is located in Forest Hills, New York. This item can be shipped worldwide.