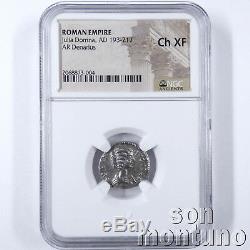 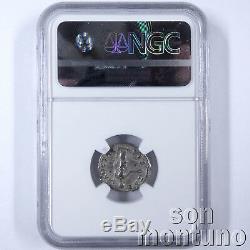 COIN SHOWN IS THE COIN YOU WILL RECEIVE. Very nice coin with sharp details! Comes with Certificate of Authenticity / Story Card. Julia Domnawife, Augusta, and primary advisor to Septimius Severusworking in a patriarchal system that officially excluded her from assuming absolute power, nevertheless managed to have her way. Unlike her predecessors, Julia Domna accompanied her husband on his military campaigns, and was known as the Lady of the Camp.

The troops adored her, and she dispensed sage military advice. She bore Septimius two sons, Geta and Caracalla, who became co-emperors upon Septimius death in 211. After Geta was assassinated by his brothers agents, Julia Domna served as Caracallas advisor until his own assassination in 217.

When his enemy Macrinus became emperor, Julia Domna was unable to bear not being in control. Rather than surrender to the new emperor, she committed suicide by starvation. This is a genuine ancient Roman silver Denarius coin. Obverse: Portrait of emperor Reverse: Various pagan deities reflecting contemporary political, military, and religious themes.

The seller is "son-montuno" and is located in Illinois. This item can be shipped worldwide.