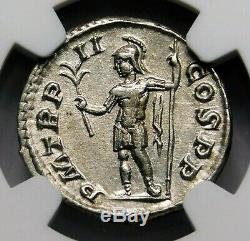 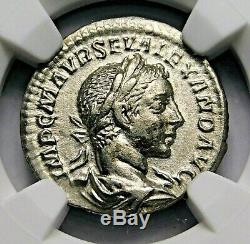 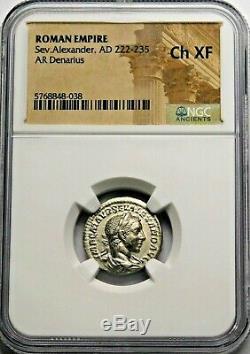 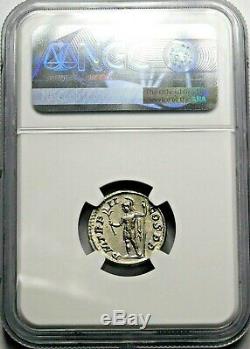 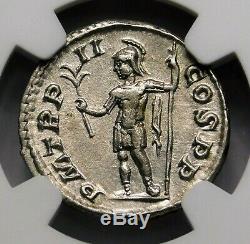 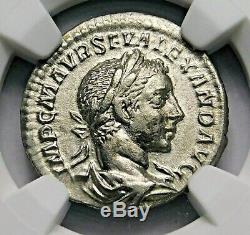 Severus Alexander (AD 222-235) AR Denarius (19mm, 2.66g, 12h) Rome, circa AD 223. Obv: IMP C M AVR SEV ALEXAND AVG, laureate and draped bust right. / Rev: P M TR P II COS P P, Mars standing left, holding branch and spear; star in left field. RIC 23; BMCRE 92; RSC 231. This coin is guaranteed for life to be a genuine ancient coin. Here at Ancient Auctions we have pledged to uphold the highest ethical standards. Severus Alexander (Marcus Aurelius Severus Alexander Augustus; 1 October 208 - 19 March 235) was Roman Emperor from 222 to 235 and the last emperor of the Severan dynasty. He succeeded his cousin Elagabalus, upon the latter's assassination in 222, and was ultimately assassinated himself, marking the epoch event for the Crisis of the Third Century?

Nearly 50 years of civil wars, foreign invasion, and collapse of the monetary economy, though this last part is now disputed. Alexander was the heir to his cousin, the 18-year-old Emperor who had been murdered along with his mother Julia Soaemias, by his own guards, who, as a mark of contempt, had their remains cast into the river Tiber. He and his cousin were both grandsons of the influential and powerful Julia Maesa, who had arranged for Elagabalus' acclamation as emperor by the famous Third Gallic Legion.

It was the rumor of Alexander's death that triggered the assassination of Elagabalus and his mother. His 13-year reign was the longest reign of a sole emperor since Antoninus Pius. He was also the second-youngest ever sole legal Roman Emperor during the existence of the united empire, the youngest being Gordian III.

As emperor, Alexander's peace time reign was prosperous. However, Rome was militarily confronted with the rising Sassanid Empire and growing incursions from the tribes of Germania. He managed to check the threat of the Sassanids.

But when campaigning against Germanic tribes, Alexander attempted to bring peace by engaging in diplomacy and bribery. This alienated many in the Roman Army and led to a conspiracy to assassinate and replace him. According to Canduci, Alexander is remembered as an emperor who was "level headed, well meaning, and conscientious", but his fatal flaw was his domination by his mother and grandmother. International Buyers - Please Note. The item "NGC Ch XF. Ancient Roman Silver Coin" is in sale since Wednesday, July 8, 2020.

This item is in the category "Coins & Paper Money\Coins\ Ancient\Roman\ Imperial (27 BC-476 AD)". The seller is "ancientauctions" and is located in Fort Lauderdale, Florida.