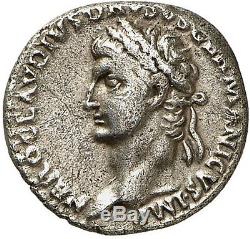 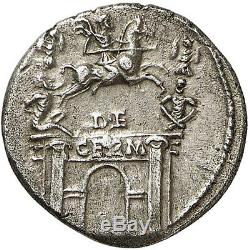 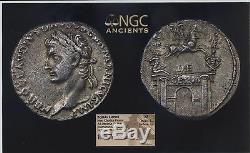 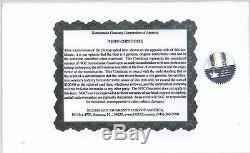 2 (Nero Drusus); BN 45; Buildings, p/76, #148; BMC 97. NERO CLAVDIVS DRVSVS GERMANICVS IMP, laureate head left. DE GERM, The equestrian statue between two trophies on the top of Triumphal Arch. Certified: NGC Ancients XF 5/5; 3/5 4372291-004 This monument was erected in honor of Drusus, the elder shortly after his death. Till our days, the location of the building was not confirmed by archaeological excavations. However, its supposed to be to the Northwest of Via Latina and Via Appia. Nero Claudius Drusus Germanicus (January 14, 38 BC - Summer of 9 BC), born Decimus Claudius Drusus also called Drusus Claudius Nero , Drusus , Drusus I , Nero Drusus , or Drusus the Elder was aRoman politician and military commander. He was a patrician Claudian on his legal father's side but his maternal grandmother was from a plebeian family. He was the son of Livia Drusilla and the legal stepson of her second husband, the Emperor Augustus. He was also brother of the Emperor Tiberius, father to both the Emperor Claudius and general Germanicus, paternal grandfather of the Emperor Caligula, and maternal great-grandfather of the Emperor Nero. He launched the first major Roman campaigns across the Rhine and began the conquest of Germania, becoming the first Roman general to reach the Weser and Elbe rivers. In 12 BC, Drusus led a successful campaign into Germania, subjugating the Sicambri. Later that year he led a naval expedition against Germanic tribes along the North Sea coast, conquering the Batavi and the Frisii, and defeating the Chauci near the mouth of the Weser. In 11 BC, he conquered the Usipetes and the Marsi, extending Roman control to the Upper Weser.

In 10 BC, he launched a campaign against the Chatti and the resurgent Sicambri, subjugating both. The following year he conquered the Mattiaci, while defeating the Marcomanni and the Cherusci, defeating the latter near the Elbe. However, Drusus died later that year, depriving Rome of one of its best generals. Drusus was the youngest son of Livia Drusilla from her marriage to Tiberius Claudius Nero, who was legally declared his father before the couple divorced. Drusus was born between mid-March and mid-April 38 BC, three months after Livia married Augustus on 17 January.

A date of March 28 has been proposed as his most likely birthday. Rumours arose that Augustus was the child's real father, although this has never been authoritatively proven. Claudius, however, encouraged the rumor during his reign as emperor to create an impression of more direct lineage from Augustus.

According to Suetonius, Drusus was originally given Decimus as his praenomen , the first of a Roman male's conventional three names in Roman naming practice at the time. Nero was a traditional cognomen (third name) of the Claudii, whereas Drusus was given to a branch of the gens Livia. Using a cognomen such as Nero as a first name was unusual, as was the prominence given to his maternal lineage in adopting Drusus as his cognomen. Drusus was raised in Claudius Nero's house with his brother, the future emperor Tiberius, until his legal father's death. The two brothers developed a famously close relationship that would last the rest of their lives. Tiberius named his eldest son after his brother, and Drusus did likewise, although eldest sons were usually named after their father or grandfather.

The item "Nero Claudius Drusus 41AD NGC Certified XF Silver Roman Coin Extremely Rare" is in sale since Tuesday, May 17, 2016. This item is in the category "Coins & Paper Money\Coins\ Ancient\Roman\ Imperial (27 BC-476 AD)". The seller is "victoram" and is located in Forest Hills, New York. This item can be shipped worldwide.