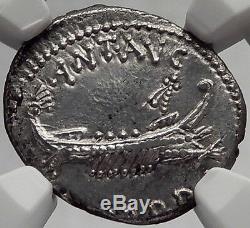 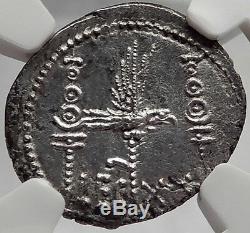 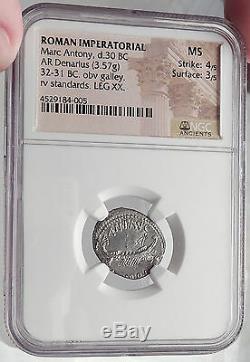 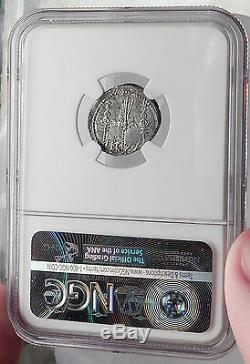 LEG XX, Legionary eagle between two standards. This coin was struck by Antony for the use of his fleet and legions when he was preparing for the struggle with Octavian. These coins furnish an interesting record of the number of legions of which Antony's army was composed.

The Battle of Actium was the decisive confrontation of the Final War of the Roman Republic. It was fought between the forces of Octavian and the combined forces of Mark Antony and Cleopatra.

The battle took place on 2 September 31 BC, on the Ionian Sea near the Roman colony of Actium in Greece. Octavian's fleet was commanded by Marcus Vipsanius Agrippa, while Antony's fleet was supported by the ships of his beloved, Cleopatra VII, Queen of Ptolemaic Egypt. Octavian's victory enabled him to consolidate his power over Rome and its dominions.

After the fall of the Western Roman Empire galleys formed the mainstay of the Byzantine navy and other navies of successors of the Roman Empire, as well as new Muslim navies. Medieval Mediterranean states, notably the Italian maritime republics, including Venice, Pisa, Genoa and the Ottoman Empire relied on them as the primary warships of their fleets until the 17th century, when they were gradually replaced by sailing warships. Galleys continued to be applied in minor roles in the Mediterranean and the Baltic Sea even after the introduction of steam propelled ships in the early 19th century. The galley engagements at Actium and Lepanto are among the greatest naval battles in history. Jupiter is usually thought to have originated as a sky god. His identifying implement is the thunderbolt, and his primary sacred animal is the eagle , which held precedence over other birds in the taking of auspices and became one of the most common symbols of the Roman army (see Aquila). The two emblems were often combined to represent the god in the form of an eagle holding in its claws a thunderbolt, frequently seen on Greek and Roman coins.

As the sky-god, he was a divine witness to oaths, the sacred trust on which justice and good government depend. Many of his functions were focused on the Capitoline ("Capitol Hill"), where the citadel was located. He was the chief deity of the early Capitoline Triad with Mars and Quirinus.

In the later Capitoline Triad, he was the central guardian of the state with Juno and Minerva. His sacred tree was the oak.

The Romans regarded Jupiter as the equivalent of the Greek Zeus, and in Latin literature and Roman art, the myths and iconography of Zeus are adapted under the name Iuppiter. An aquila , or eagle , was a prominent symbol used in ancient Rome, especially as the standard of a Roman legion. A legionary known as an aquilifer, or eagle-bearer, carried this standard. Each legion carried one eagle. The eagle was extremely important to the Roman military, beyond merely being a symbol of a legion.

A lost standard was considered an extremely grave occurrence, and the Roman military often went to great lengths to both protect a standard and to recover it if lost; for example, see the aftermath of the Battle of the Teutoburg Forest, where the Romans spent decades attempting to recover the lost standards of three legions. Cleopatra VII Philopator in Greek, ; (Late 69 BC - August 12, 30 BC) was the last person to rule Egypt as an Egyptian pharaoh - after she died, Egypt became a Roman province. She was a member of the Ptolemaic dynasty of Ancient Egypt, and therefore was a descendant of one of Alexander the Great's generals who had seized control over Egypt after Alexander's death.

Most Ptolemeis spoke Greek and refused to learn Egyptian, which is the reason that Greek as well as Egyptian languages were used on official court documents like the Rosetta Stone. By contrast, Cleopatra learned Egyptian and represented herself as the reincarnation of an Egyptian Goddess. Cleopatra originally ruled jointly with her father Ptolemy XII Auletes and later with her brothers, Ptolemy XIII and Ptolemy XIV, whom she married as per Egyptian custom, but eventually she became sole ruler. As pharaoh, she consummated a liaison with Gaius Julius Caesar that solidified her grip on the throne.

She later elevated her son with Caesar, Caesarion, to co-ruler in name. After Caesar's assassination Mark Antony in opposition to Caesar's legal heir, Gaius Iulius Caesar Octavianus (later known as Augustus). With Antony, she bore the twins Cleopatra Selene II and Alexander Helios, and another son, Ptolemy Philadelphus. Her unions with her brothers produced no children.

After losing the Battle of Actium to Octavian's forces, Antony committed suicide. Cleopatra followed suit, according to tradition killing herself by means of an asp bite on August 12, 30 BC. She was briefly outlived by Caesarion, who was declared pharaoh, but he was soon killed on Octavian's orders.

Egypt became the Roman province of Aegyptus. Though Cleopatra bore the ancient Egyptian title of pharaoh, the Ptolemaic dynasty was Hellenistic, having been founded 300 years before by Ptolemy I Soter, a Macedonian Greek general of Alexander the Great. As such, Cleopatra's language was the Greek spoken by the Hellenic aristocracy, though she was reputed to be the first ruler of the dynasty to learn Egyptian. She also adopted common Egyptian beliefs and deities. Her patron goddess was Isis, and thus, during her reign, it was believed that she was the re-incarnation and embodiment of the goddess of wisdom.

Her death marked the end of the Ptolemaic Kingdom and Hellenistic period and the beginning of the Roman era in the eastern Mediterranean. To this day, Cleopatra remains a popular figure in Western culture. Her legacy survives in numerous works of art and the many dramatizations of her story in literature and other media, including William Shakespeare Antony and Cleopatra, Jules Massenet's opera Cléopâtre and the 1963 film Cleopatra. In most depictions, Cleopatra is put forward as a great beauty and her successive conquests of the world's most powerful men are taken to be proof of her aesthetic and sexual appeal.

In his Pensées , philosopher Blaise Pascal contends that Cleopatra's classically beautiful profile changed world history: Cleopatra's nose, had it been shorter, the whole face of the world would have been changed. Marcus Antonius , commonly known in English as Mark Antony (Latin: M·ANTONIVS·M·F·M·N)(January 14, 83 BC - August 1, 30 BC), was a Roman politician and general.

As a military commander and administrator, he was an important supporter and loyal friend of his mother's cousin Julius Caesar. After Caesar's assassination, Antony formed an official political alliance with Octavian (the future Augustus) and Lepidus, known to historians today as the Second Triumvirate.

He and his lover Cleopatra committed suicide shortly thereafter. His career and defeat are significant in Rome's transformation from Republic to Empire. The item "MARK ANTONY & Cleopatra 31BC Actium SHIP LEG XX Ancient Silver Roman Coin NGC MS" is in sale since Sunday, April 2, 2017. This item is in the category "Coins & Paper Money\Coins\ Ancient\Roman\ Republic (300 BC-27 BC)". The seller is "victoram" and is located in Forest Hills, New York. This item can be shipped worldwide.