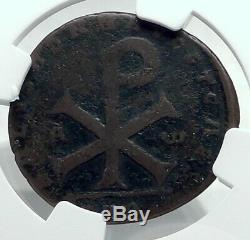 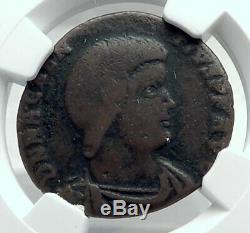 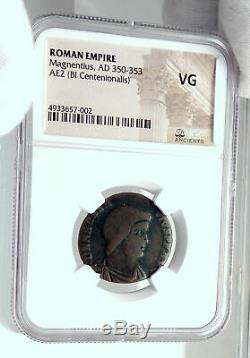 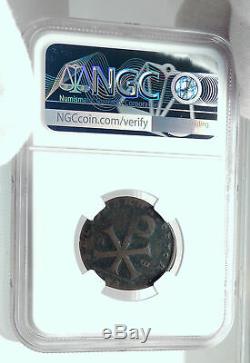 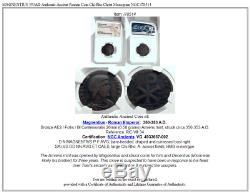 SALVS DD NN AVG ET CAES, large Chi-Rho; A- across fields; HMB in exergue. The Amiens mint was opened by Magnentius and struck coins for him and Decentius (whom was likely his brother) for three years. This move is suspected to have been in response to his fears over Trier's security as Constantius II pursued the usurpers.

The labarum was a vexillum (military standard) that displayed the "Chi-Rho" symbol , a christogram formed from the first two Greek letters of the word "Christ" (Greek: , or) - Chi and Rho. It was first used by the Roman emperor Constantine I. Since the vexillum consisted of a flag suspended from the crossbar of a cross, it was ideally suited to symbolize the crucifixion of Christ. Ancient sources draw an unambiguous distinction between the two terms "labarum" and "Chi-Rho", even though later usage sometimes regards the two as synonyms. The name labarum was applied both to the original standard used by Constantine the Great and to the many standards produced in imitation of it in the Late Antique world, and subsequently. The Chi Rho is one of the earliest forms of christogram, and is used by some Christians. It is formed by superimposing the first two (capital) letters chi and rho of the Greek word " " = KR istos =Christ in such a way to produce the monogram. Although not technically a Christian cross, the Chi-Rho invokes the authority of Jesus, as well as symbolising his status as the Christ. The Chi-Rho symbol was also used by pagan Greek scribes to mark, in the margin, a particularly valuable or relevant passage; the combined letters Chi and Rho standing for chrston, meaning good. Some coins of Ptolemy III Euergetes r. 246-222 BC were marked with a Chi-Rho. The Chi-Rho symbol was used by the Roman emperor Constantine I r.

306-337 as part of a military standard (vexillum), Constantine's standard was known as the Labarum. Early symbols similar to the Chi Rho were the Staurogram and the IX monogram . Magnentius Latin: Flavius Magnus Magnentius Augustus ; r. 303 - August 11, 353 was a usurper of the Roman Empire from 350 to 353. Born in Samarobriva (Amiens), Gaul, Magnentius was the commander of the Herculians and Jovians, the Imperial guard units.

When the army grew dissatisfied with the behavior of Roman Emperor Constans, it elevated Magnentius at Autun on January 18, 350. Constans was abandoned by all except a handful of retainers, and he was slain shortly afterwards by a troop of light cavalry near the Pyrenees. Magnentius quickly attracted the loyalty of the provinces in Britannia, Gaul, and Hispania, in part because he proved to be far more tolerant towards both Christians and Pagans. His control on Italia and Africa was applied through the election of his men to the most important offices.

However, the short-lived revolt of Nepotianus, a member of the Constantinian dynasty, showed Magnentius that his status as emperor was to be consolidated against the members of that dynasty. Magnentius tried to strengthen his grasp on the territories previously controlled by Constans, moving towards the Danube.

Vetranio, commander of the Pannonian army, had been elected Augustus by his troops in Mursa on 1 March. This revolt had a loyalist mark, since Vetranio was supported by Constantina, and Constantius II himself recognized Vetranio, sending him the imperial diadem. The remaining emperor of the family of Constantine I, Constantius II broke off his war in Syria with Persia, and marched west. Despite Magnentius' efforts to gain Vetranio to his cause, the elderly Vetranio reached Constantius with his army, resigned the crown, and went into retirement in Bithynia.

As a result of Magnentius' defeat, Italy ejected his garrisons and rejoined the loyalist cause. Magnentius made a final stand in 353 in the Battle of Mons Seleucus, after which he committed suicide by falling on his sword. Following the suppression of Magnentius' rebellion, Constantius commanded an investigation be made to find his followers. The most notorious agent in this search was the primicerius notariorum Paulus Catena ("Paul the Chain"). Some sources state that Magnentius' father was a Briton and his mother a Frank.

His wife, Justina, later remarried to Valentinian I. World-renowned expert numismatist, enthusiast, author and dealer in authentic ancient Greek, ancient Roman, ancient Byzantine, world coins & more. Ilya Zlobin is an independent individual who has a passion for coin collecting, research and understanding the importance of the historical context and significance all coins and objects represent. Send me a message about this and I can update your invoice should you want this method. Getting your order to you, quickly and securely is a top priority and is taken seriously here. Great care is taken in packaging and mailing every item securely and quickly. What is a certificate of authenticity and what guarantees do you give that the item is authentic? You will be very happy with what you get with the COA; a professional presentation of the coin, with all of the relevant information and a picture of the coin you saw in the listing. Additionally, the coin is inside it's own protective coin flip (holder), with a 2x2 inch description of the coin matching the individual number on the COA. Whether your goal is to collect or give the item as a gift, coins presented like this could be more prized and valued higher than items that were not given such care and attention to. When should I leave feedback? Please don't leave any negative feedbacks, as it happens sometimes that people rush to leave feedback before letting sufficient time for their order to arrive. The matter of fact is that any issues can be resolved, as reputation is most important to me. My goal is to provide superior products and quality of service. How and where do I learn more about collecting ancient coins? Visit the Guide on How to Use My Store. For on an overview about using my store, with additional information and links to all other parts of my store which may include educational information on topics you are looking for. The item "MAGNENTIUS 353AD Authentic Ancient Roman Coin Chi-Rho Christ Monogram NGC i78514" is in sale since Monday, June 10, 2019. This item is in the category "Coins & Paper Money\Coins\ Ancient\Roman\ Imperial (27 BC-476 AD)". The seller is "highrating_lowprice" and is located in Rego Park, New York. This item can be shipped worldwide.