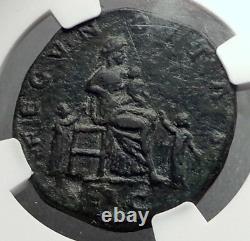 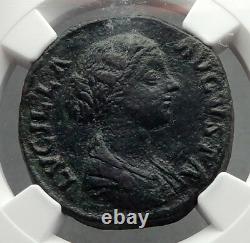 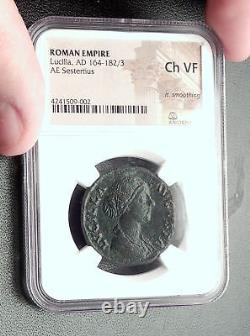 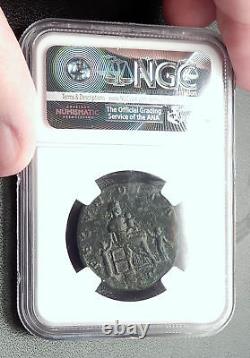 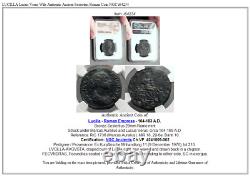 She was portrayed as a matron, sometimes holding a cornucopia or a hasta pura, with children in her arms or standing next to her. Nero dedicated a temple at Rome to Fecunditas, on occasion of his daughter's birth in 63 AD. Annia Aurelia Galeria Lucilla or Lucilla (March 7, 148 or 150-182) was the second daughter and third child of Roman Emperor Marcus Aurelius and Roman Empress Faustina the Younger and an elder sister to future Roman Emperor Commodus. Lucilla was the younger twin.

Lucilla in 161, was betrothed to her father's co-ruler Lucius Verus and they married in 164, in Ephesus. At that time, Marcus Aurelius and Lucius Verus were a fighting a Parthian war in Syria. She received the title of Augusta and became a Roman Empress. Lucilla bore Lucius three children: two daughters and a son. The first daughter was born in 165 in Antioch.

The elder daughter Aurelia Lucilla and son Lucius Verus died young. Lucilla was an influential and respectable woman and she enjoyed her status. Sometime in 169, Marcus Aurelius forced her to marry Tiberius Claudius Pompeianus Quintianus, a Syrian Roman who was twice consul and a political ally to her father. Lucilla and her mother were against this marriage, because Quintianus was an older man and Lucilla preferred to marry a younger man.

Lucilla around 170, bore Quintianus a son called Pompeianus. Lucilla and Quintianus accompanied Marcus Aurelius in 172, to Vienna in support of the Danube military campaign.

They were with him until March 17 180, when her father died and Commodus became the new emperor. Lucilla was not happy living as a quiet, private citizen in Rome and became jealous of her brother and her sister-in-law because of all the attention that they received.

Also she became very concerned due to the unstable behaviour of her brother. In 182 Lucilla, her daughter from her first marriage Plautia, her nephew-in-marriage and with help from her paternal cousins the former consul Marcus Ummidius Quadratus Annianus and his sister Ummidia Cornificia Faustina, had planned to assassinate Commodus and replace him with her husband and herself as the new rulers of Rome. Quintianus' nephew of the same name burst from his place of hiding with a dagger, trying to stab Commodus. He said to him "Here is the dagger the senate sends to you", giving away his intentions before he had the chance to act.

The guards were faster than he was. He was overpowered and disarmed without doing the emperor any harm. Commodus had ordered the deaths of her nephew-in-marriage and Marcus Ummidius Quadratus Annianus.

Lucilla, her daughter and Ummidia Cornificia Faustina were banished to the Italian island of Capri. The Emperor then sent a centurion to Capri to execute the three women later that year. In the 1964 film The Fall of the Roman Empire, Lucilla is played by Sophia Loren; in the 2000 film Gladiator, she was played by Connie Nielsen. World-renowned expert numismatist, enthusiast, author and dealer in authentic ancient Greek, ancient Roman, ancient Byzantine, world coins & more.