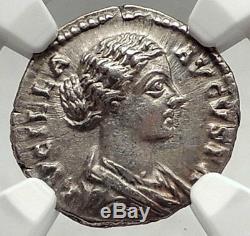 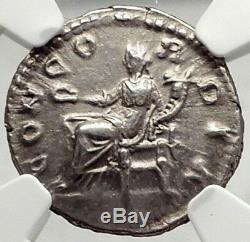 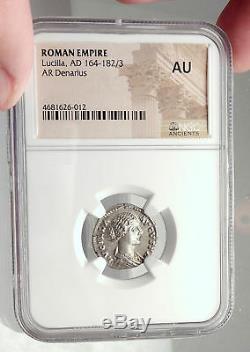 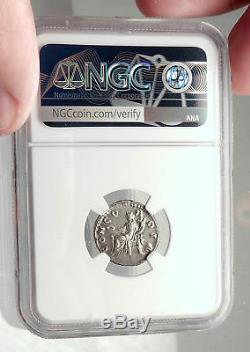 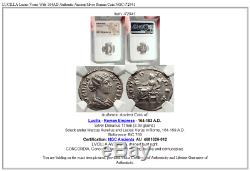 CONCORDIA, Concordia seated left, holding patera and cornucopiae. In ancient Roman religion, Concordia is the goddess who embodies agreement in marriage and society. Her Greek equivalent is usually regarded as Harmonia, with musical harmony a metaphor for an ideal of social concord or entente in the political discourse of the Republican era.

She was thus often associated with Pax ("Peace") in representing a stable society. As such, she is more closely related to the Greek concept of homonoia (likemindedness), which was also represented by a goddess.

Concordia Augusta was cultivated in the context of Imperial cult. Dedicatory inscriptions to her, on behalf of emperors and members of the imperial family, were common. In art, Concordia was depicted sitting, wearing a long cloak and holding onto a patera (sacrificial bowl), a cornucopia (symbol of prosperity), or a caduceus (symbol of peace).

She was often shown in between two other figures, such as standing between two members of the Imperial family shaking hands. She was associated with a pair of female deities, such as Pax and Salus, or Securitas and Fortuna.

Paired "Security and Luck" could also be represented by Hercules and Mercury. The oldest Temple of Concord, built in 367 BC by Marcus Furius Camillus, stood on the Roman Forum. Other temples and shrines in Rome dedicated to Concordia were largely geographically related to the main temple, and included (in date order).

A bronze shrine (aedicula) of Concord erected by the aedile Gnaeus Flavius in 304 BC "in Graecostasis" and "in area Volcani" (placing it on the Graecostasis, close to the main temple of Concord). It must have been destroyed when the main temple was enlarged by Opimius in 121 BC. One built on the arx (probably on the east side, overlooked the main temple of Concord below). It was probably vowed by the praetor Lucius Manlius in 218 BC after quelling a mutiny among his troops in Cisalpine Gaul, with building work commencing in 217 and dedication occurring on 5 February 216. A temple to Concordia Nova, marking the end Julius Caesar had brought to civil war.

The description of the Porticus Liviae follows immediately, and it is probable therefore that the temple was close to or within the porticus, but the small rectangular structure marked on the Marble Plan frg. 10 can hardly have been a temple deserving of the epithet "magnifica" (HJ 316). In Pompeii, the high priestess Eumachia dedicated a building to Concordia Augusta. Harmonians and some Discordians equate Concordia with Aneris.

Her opposite is thus Discordia, or the Greek Eris. Annia Aurelia Galeria Lucilla or Lucilla (March 7, 148 or 150-182) was the second daughter and third child of Roman Emperor Marcus Aurelius and Roman Empress Faustina the Younger and an elder sister to future Roman Emperor Commodus. Lucilla was the younger twin. Her elder brother Gemellus Lucillae died around 150.

She was born and raised in Rome. Lucilla's maternal grandparents were Roman Emperor Antoninus Pius and Roman Empress Faustina the Elder and her paternal grandparents were Domitia Lucilla and praetor Marcus Annius Verus. Lucilla in 161, was betrothed to her father's co-ruler Lucius Verus and they married in 164, in Ephesus. At that time, Marcus Aurelius and Lucius Verus were a fighting a Parthian war in Syria. She received the title of Augusta and became a Roman Empress.

Lucilla was an influential and respectable woman and she enjoyed her status. Sometime in 169, Marcus Aurelius forced her to marry Tiberius Claudius Pompeianus Quintianus, a Syrian Roman who was twice consul and a political ally to her father. Lucilla and her mother were against this marriage, because Quintianus was an older man and Lucilla preferred to marry a younger man. Lucilla around 170, bore Quintianus a son called Pompeianus.

Lucilla and Quintianus accompanied Marcus Aurelius in 172, to Vienna in support of the Danube military campaign. They were with him until March 17 180, when her father died and Commodus became the new emperor.

Lucilla was not happy living as a quiet, private citizen in Rome and became jealous of her brother and her sister-in-law because of all the attention that they received. Also she became very concerned due to the unstable behaviour of her brother. In 182 Lucilla, her daughter from her first marriage Plautia, her nephew-in-marriage and with help from her paternal cousins the former consul Marcus Ummidius Quadratus Annianus and his sister Ummidia Cornificia Faustina, had planned to assassinate Commodus and replace him with her husband and herself as the new rulers of Rome.

Quintianus' nephew of the same name burst from his place of hiding with a dagger, trying to stab Commodus. He said to him "Here is the dagger the senate sends to you", giving away his intentions before he had the chance to act. The guards were faster than he was. He was overpowered and disarmed without doing the emperor any harm. Commodus had ordered the deaths of her nephew-in-marriage and Marcus Ummidius Quadratus Annianus.

Lucilla, her daughter and Ummidia Cornificia Faustina were banished to the Italian island of Capri. The Emperor then sent a centurion to Capri to execute the three women later that year. In the 1964 film The Fall of the Roman Empire , Lucilla is played by Sophia Loren; in the 2000 film Gladiator, she was played by Connie Nielsen. World-renowned expert numismatist, enthusiast, author and dealer in authentic ancient Greek, ancient Roman, ancient Byzantine, world coins & more.

How and where do I learn more about collecting ancient coins? Visit the Guide on How to Use My Store. For on an overview about using my store, with additional information and links to all other parts of my store which may include educational information on topics you are looking for. The item "LUCILLA Lucius Verus Wife 164AD Authentic Ancient Silver Roman Coin NGC i72941" is in sale since Wednesday, October 24, 2018. This item is in the category "Coins & Paper Money\Coins\ Ancient\Roman\ Imperial (27 BC-476 AD)".