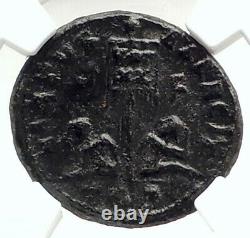 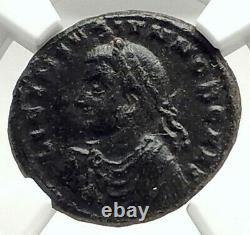 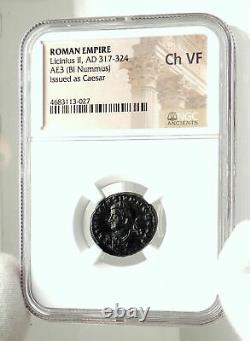 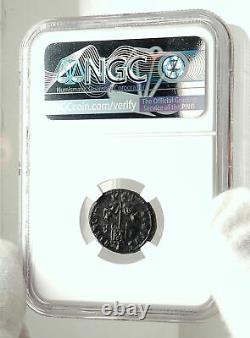 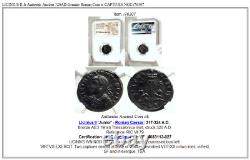 Item: i76307 Authentic Ancient Coin of. Bronze AE3 19mm Thessalonica mint, struck 320 A. Reference: RIC VII 79 Certification: NGC Ancients. Ch VF 4683113-027 LICINIVS IVN NOB CAES, Laureate, draped, cuirassed bust left. VIRTVS EXERCIT, Two captives seated at base of vexillum inscribed VOT/XX in two lines; in field, S-F and in exergue. Valerius Licinianus Licinius, Licinius II or Licinius the Younger approx. 315-326, was the son of Roman emperor Licinius. He nominally served as Caesar in the eastern empire from 317 to 324 A. D while his father was Augustus. His mother was Licinius' wife Flavia Julia Constantia, who was also the half-sister of Constantine I.

After his defeat by Constantine at the Battle of Chrysopolis, Licinius the elder was initially spared and placed in captivity at Thessalonica. However, within a year Constantine seems to have regretted his leniency and the former Emperor was hanged.

The younger Licinius, who was Constantine's nephew, also fell victim to the emperor's suspicions and was killed, probably in the context of the execution of Crispus in 326. Other reports relate that Licinius the younger was forced into slavery in the imperial textile factories in Africa, where he is noted in 336. However, the imperial rescript of 336 makes it clear that the "son of Licinianus" referred to was not Licinius II as it directs that he be reduced to the slave status of his birth. No son of Constantine's sister would have been referred to in this manner. World-renowned expert numismatist, enthusiast, author and dealer in authentic ancient Greek, ancient Roman, ancient Byzantine, world coins & more. Ilya Zlobin is an independent individual who has a passion for coin collecting, research and understanding the importance of the historical context and significance all coins and objects represent. Send me a message about this and I can update your invoice should you want this method. Getting your order to you, quickly and securely is a top priority and is taken seriously here. Great care is taken in packaging and mailing every item securely and quickly. What is a certificate of authenticity and what guarantees do you give that the item is authentic? You will be very happy with what you get with the COA; a professional presentation of the coin, with all of the relevant information and a picture of the coin you saw in the listing. Additionally, the coin is inside it's own protective coin flip (holder), with a 2x2 inch description of the coin matching the individual number on the COA. Whether your goal is to collect or give the item as a gift, coins presented like this could be more prized and valued higher than items that were not given such care and attention to. When should I leave feedback?

For on an overview about using my store, with additional information and links to all other parts of my store which may include educational information on topics you are looking for. This item is in the category "Coins & Paper Money\Coins: Ancient\Roman: Imperial (27 BC-476 AD)". The seller is "highrating_lowprice" and is located in this country: US.