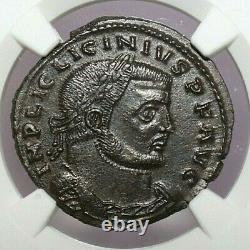 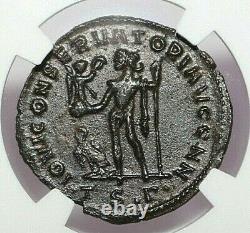 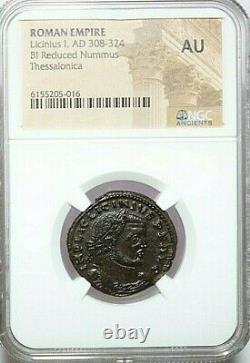 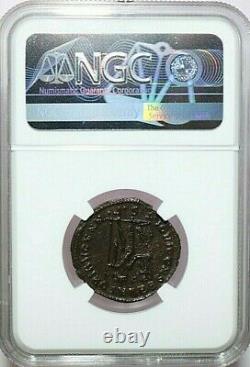 Dear Customers, you will receive exactly the same item which you see on the pictures, not similar or other. Please read the description carefully and review the photos. Of Licinius minted at Londinium. Spring of 325 (aged around 60) Thessalonica. 265 - 325 was Roman emperor. For most of his reign he was the colleague and rival of Constantine I. With whom he co-authored the Edict of Milan. AD 313, that granted official toleration to Christians in the Roman Empire. He was finally defeated at the Battle of Chrysopolis. (AD 324), and was later executed on the orders of Constantine I.

Superior, Licinius accompanied his close childhood friend, the future emperor Galerius. On the Persian expedition in 298. He was trusted enough by Galerius that in 307 he was sent as an envoy to Maxentius. To attempt to reach some agreement about the latter's illegitimate political position.

Galerius then trusted the eastern provinces to Licinius when he went to deal with Maxentius personally after the death of Flavius Valerius Severus. Upon his return to the east Galerius elevated Licinius to the rank of Augustus in the West. On 11 November 308, and under his immediate command were the Balkan provinces of Illyricum. In 310 he took command of the war against the Sarmatians. Inflicting a severe defeat on them.

On the death of Galerius in May 311, Licinius entered into an agreement with Maximinus Daza. To share the eastern provinces between them. By this point, not only was Licinius the official Augustus of the west but he also possessed part of the eastern provinces as well, as the Hellespont. Became the dividing line, with Licinius taking the European provinces and Maximinus taking the Asian. An alliance between Maximinus and Maxentius forced the two remaining emperors to enter into a formal agreement with each other.

So in March 313 Licinius married Flavia Julia Constantia. ; they had a son, Licinius the Younger. Their marriage was the occasion for the jointly-issued Edict of Milan. That reissued Galerius' previous edict allowing Christianity. The redaction of the edict as reproduced by Lactantius. Who follows the text affixed by Licinius in Nicomedia. On 14 June 313, after Maximinus' defeat - uses neutral language, expressing a will to propitiate "any Divinity whatsoever in the seat of the heavens".

Daza in the meantime decided to attack Licinius. Leaving Syria with 70,000 men, he reached Bithynia.

Although harsh weather he encountered along the way had gravely weakened his army. In April 313, he crossed the Bosporus. Which was held by Licinius' troops. Undeterred, he took the town after an eleven-day siege. He moved to Heraclea, which he captured after a short siege, before moving his forces to the first posting station. With a much smaller body of men, possibly around 30,000, Licinius arrived at Adrianople. While Daza was still besieging Heraclea.

Before the decisive engagement, Licinius allegedly had a vision in which an angel recited him a generic prayer that could be adopted by all cults and which Licinius then repeated to his soldiers. On 30 April 313, the two armies clashed at the Battle of Tzirallum. And in the ensuing battle Daza's forces were crushed.

Ridding himself of the imperial purple and dressing like a slave, Daza fled to Nicomedia. Believing he still had a chance to come out victorious, Daza attempted to stop the advance of Licinius at the Cilician Gates. Unfortunately for Daza, Licinius' army succeeded in breaking through, forcing Daza to retreat to Tarsus. Where Licinius continued to press him on land and sea. The war between them ended only with Daza's death in August 313. Given that Constantine had already crushed his rival Maxentius in 312, the two men decided to divide the Roman world between them. As a result of this settlement, the Tetrarchy. Was replaced by a system of two emperors, called Augusti : Licinius became Augustus of the East, while his brother-in-law, Constantine, became Augustus of the West. After making the pact, Licinius rushed immediately to the East to deal with another threat, an invasion by the Persian Sassanid Empire. Sculptural portraits of Licinius (left) and his rival Constantine I. In 314, a civil war erupted between Licinius and Constantine, in which Constantine used the pretext that Licinius was harbouring Senecio, whom Constantine accused of plotting to overthrow him.

Constantine prevailed at the Battle of Cibalae. Although the situation was temporarily settled, with both men sharing the consulship. In 315, it was but a lull in the storm.

The next year a new war erupted, when Licinius named Valerius Valens. Co-emperor, only for Licinius to suffer a humiliating defeat on the plains in the Battle of Mardia. (also known as the Battle of Campus Ardiensis) in Thrace. The emperors were reconciled after these two battles and Licinius had his co-emperor Valens killed.

Over the next ten years, the two imperial colleagues maintained an uneasy truce. Licinius kept himself busy with a campaign against the Sarmatians in 318, but temperatures rose again in 321 when Constantine pursued some Sarmatians, who had been ravaging some territory in his realm, across the Danube into what was technically Licinius's territory. When he repeated this with another invasion, this time by the Goths.

Licinius complained that Constantine had broken the treaty between them. Constantine wasted no time going on the offensive. Then in 324, Constantine, tempted by the "advanced age and unpopular vices" of his colleague, again declared war against him and having defeated his army of 165,000 men at the Battle of Adrianople. (3 July 324), succeeded in shutting him up within the walls of Byzantium.

The defeat of the superior fleet of Licinius in the Battle of the Hellespont. Constantine's eldest son and Caesar.

Compelled his withdrawal to Bithynia. Where a last stand was made; the Battle of Chrysopolis.

(18 September), resulted in Licinius' final submission. In this conflict Licinius was supported by the Gothic prince Alica. Due to the intervention of Flavia Julia Constantia, Constantine's sister and also Licinius' wife, both Licinius and his co-emperor Martinian.

Were initially spared, Licinius being imprisoned in Thessalonica. However, both former emperors were subsequently executed. After his defeat, Licinius attempted to regain power with Gothic support, but his plans were exposed, and he was sentenced to death. While attempting to flee to the Goths, Licinius was apprehended at Thessalonica. Constantine had him hanged, accusing him of conspiring to raise troops among the barbarians. One of a hoard of 5 or 6 identical silver plates celebrating Licinius's 10th anniversary as Emperor, discovered in Nis. Serbia and now in the British Museum.

Another plate from the same hoard in the Kunsthistorisches Museum. After defeating Daza, he had put to death Flavius Severianus.

The son of the emperor Severus, as well as Candidianus, the son of Galerius. He also ordered the execution of the wife and daughter of the Emperor Diocletian. Who had fled from the court of Licinius before being discovered at Thessalonica.

As part of Constantine's attempts to decrease Licinius's popularity, he actively portrayed his brother-in-law as a pagan supporter. This may not have been the case; contemporary evidence tends to suggest that he was at least a committed supporter of Christians at one point. He co-authored the Edict of Milan which ended the Great Persecution. And re-affirmed the rights of Christians in his half of the empire. He also added the Christian symbol to his armies, and attempted to regulate the affairs of the Church hierarchy just as Constantine and his successors were to do.

His wife was a devout Christian. It is even a possibility that he converted. Writing under the rule of Constantine, charges him with expelling Christians from the Palace and ordering military sacrifices to pagan gods, as well as interfering with the Church's internal procedures and organization. It has been theorized that he originally supported Christians along with Constantine, but later in his life turned against them and to paganism.

Finally, on Licinius's death, his memory was branded with infamy; his statues were thrown down; and by edict, all his laws and judicial proceedings during his reign were abolished. This item is in the category "Coins & Paper Money\Coins: Ancient\Roman: Imperial (27 BC-476 AD)".bean_medals" and is located in this country: LV.