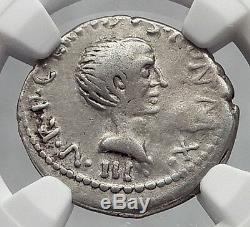 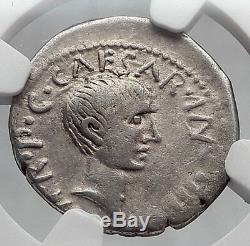 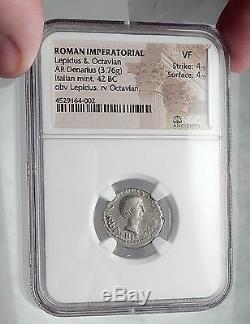 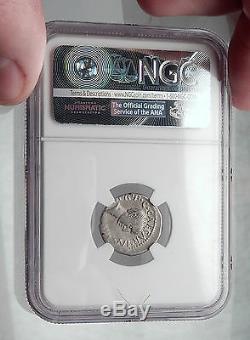 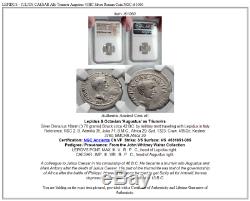 Item: i61060 Authentic Ancient Coin of. Lepidus & Octavian'Augustus' as Triumvirs Silver Denarius 18mm (3.76 grams) Struck circa 42 BC. By military mint traveling with Lepidus in Italy Reference: RSC 2; B.

Aemilia 35, Julia 71; B. 495/2c; Kestner 3760; BMCRR Africa 30 Certification: NGC Ancients. Ch VF Strike: 3/5 Surface: 4/5 4531051-005 Pedigree / Provenance: From the John Whitney Walter Collection LEPIDVS PONT. A colleague to Julius Caesar in his consulship of 46 B. He became a triumvir with Augustus and Mark Antony after the death of Julius Caesar.

His part of the triumvirite was that of the governorship of Africa after the battle of Philippi. However because he tried to get Sicily all for himself, he was deprived of all power. Lepidus died in 13 B. Marcus Aemilius Lepidus (Latin: M·AEMILIVS·M·F·Q·N·LEPIDVS), born c. 89 or 88 BC, died late 13 or early 12 BC was a Roman patrician who was triumvir with Octavian (the future Augustus) and Mark Antony, and the last Pontifex Maximus of the Roman Republic.

Lepidus had previously been a close ally of Julius Caesar. Lepidus has always been portrayed as the weakest member of the triumvirate. He was disparaged by a number of ancient historians as feeble and untrustworthy.

He typically appears as an easily marginalised figure in depictions of the events of the era, most notably in Shakespeare's plays. While some scholars have endorsed this view, others argue that the evidence is insufficient to discount the distorting effects of propaganda by Lepidus' opponents, principally Cicero, and later, Augustus. World-renowned expert numismatist, enthusiast, author and dealer in authentic ancient Greek, ancient Roman, ancient Byzantine, world coins & more. Ilya Zlobin is an independent individual who has a passion for coin collecting, research and understanding the importance of the historical context and significance all coins and objects represent. Send me a message about this and I can update your invoice should you want this method.

Getting your order to you, quickly and securely is a top priority and is taken seriously here. Great care is taken in packaging and mailing every item securely and quickly. What is a certificate of authenticity and what guarantees do you give that the item is authentic? You will be very happy with what you get with the COA; a professional presentation of the coin, with all of the relevant information and a picture of the coin you saw in the listing. Additionally, the coin is inside it's own protective coin flip (holder), with a 2x2 inch description of the coin matching the individual number on the COA. Whether your goal is to collect or give the item as a gift, coins presented like this could be more prized and valued higher than items that were not given such care and attention to. When should I leave feedback? Please don't leave any negative feedbacks, as it happens sometimes that people rush to leave feedback before letting sufficient time for their order to arrive. The matter of fact is that any issues can be resolved, as reputation is most important to me. My goal is to provide superior products and quality of service. How and where do I learn more about collecting ancient coins? Visit the "Guide on How to Use My Store". For on an overview about using my store, with additional information and links to all other parts of my store which may include educational information on topics you are looking for.

The item "LEPIDUS JULIUS CAESAR Ally Triumvir Augustus 43BC Silver Roman Coin NGC i61060" is in sale since Monday, August 20, 2018. This item is in the category "Coins & Paper Money\Coins\ Ancient\Roman\ Republic (300 BC-27 BC)". The seller is "highrating_lowprice" and is located in Rego Park, New York.