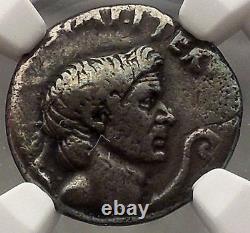 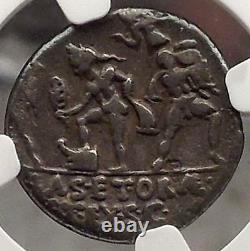 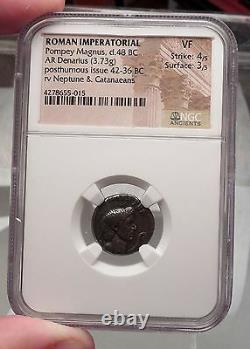 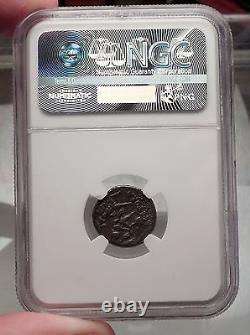 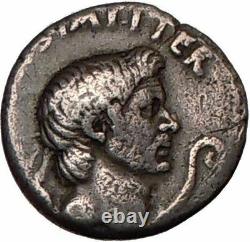 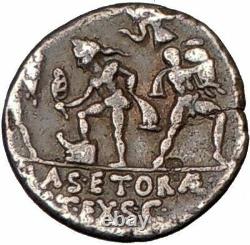 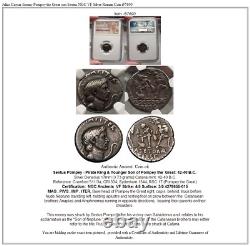 Silver Denarius 17mm (3.73 grams) Catana mint: 42-40 B. Reference: Crawford 511/3a; CRI 334; Sydenham 1344; RSC 17 (Pompey the Great) Certification: NGC Ancients VF Strike: 4/5 Surface: 3/5 4278655-015 MAG. ITER, Bare head of Pompey the Great right; capis behind, lituus before. Nude Neptune standing left, holding aplustre and resting foot on prow between the Catanaean brothers Anapias and Amphinomus running in opposite directions, bearing their parents on their shoulders. Was the god of water and the sea in Roman mythology and religion.

He is analogous with, but not identical to, the Greek god Poseidon. In the Greek-influenced tradition , Neptune was the brother of Jupiter and Pluto , each of them presiding over one of the three realms of the universe, Heaven, Earth and the Netherworld. Depictions of Neptune in Roman mosaics , especially those of North Africa , are influenced by Hellenistic conventions. Unlike the Greek Oceanus , titan of the world-ocean, Neptune was associated as well with fresh water. Georges Dumézil suggested that for Latins , who were not a seafaring people, the primary identification of Neptune was with freshwater springs.

Like Poseidon, Neptune was worshipped by the Romans also as a god of horses, under the name Neptunus Equester , a patron of horse-racing. Gnaeus Pompeius Magnus , also known as Pompey or Pompey the Great (September 29, 106 BC - September 29, 48 BC), was a military and political leader of the late Roman Republic. He came from a wealthy Italian provincial background, and established himself in the ranks of Roman nobility by successful leadership in several campaigns. Sulla addressed him by the cognomen Magnus (the Great) and he was awarded three triumphs. Pompey joined his rival Marcus Licinius Crassus and his ally and father-in-law Julius Caesar in the military-political alliance known as the First Triumvirate.

After the deaths of Crassus and Julia , Pompey's wife and Caesar's daughter, Pompey and Caesar contended the leadership of the Roman state in a civil war. Pompey sided with the optimates , the conservative and aristocratic majority of the Roman Senate. When Caesar defeated him at the battle of Pharsalus he sought refuge in Egypt, where he was assassinated. His career and defeat are significant in Rome's subsequent transformation from Republic to Principate and Empire. Sextus Pompeius Magnus Pius , in English Sextus Pompey (67 BC 35 BC), was a Roman general from the late Republic (1st century BC). He was the last focus of opposition to the Second Triumvirate.

Sextus Pompeius was the youngest son of Pompey the Great (Gnaeus Pompeius Magnus) by his third wife, Mucia Tertia. His older brother was Gnaeus Pompeius , from the same mother. Both boys grew up in the shadow of their father, one of Rome's best generals and an originally non-conservative politician who drifted to the more traditional faction when Julius Caesar became a threat. When Caesar crossed the Rubicon in 49 BC, thus starting a civil war, Sextus' older brother Gnaeus followed their father in his escape to the East, as did most of the conservative senators.

Sextus stayed in Rome in the care of his stepmother, Cornelia Metella. Pompey's army lost the battle of Pharsalus in 48 BC and Pompey himself had to run for his life.

Cornelia and Sextus met him in the island of Lesbos and together they fled to Egypt. On the arrival, Sextus watched his father being killed by treachery on September 29 of the same year.

Together with Metellus Scipio , Cato the younger , his brother Gnaeus and other senators, they prepared to oppose Caesar and his army to the end. Caesar won the first battle at Thapsus in 46 BC against Metellus Scipio and Cato, who committed suicide. In 45 BC, Caesar managed to defeat the Pompeius brothers in the battle of Munda , in Hispania (the Iberian Peninsula , comprising modern Spain and Portugal).

Gnaeus Pompeius was executed, but young Sextus escaped once more, this time to Sicily. Back in Rome, Julius Caesar was murdered on the Ides of March (March 15) 44 BC by a group of senators led by Cassius and Brutus. This incident did not lead to a return to normality, but provoked yet another civil war between Caesar's political heirs and his assassins.

The second triumvirate was formed by Octavian , Mark Antony and Lepidus , with the intention of avenging Caesar and subduing all opposition. Sextus Pompeius in Sicily was certainly a rebellious man, but the Cassius and Brutus faction was the second triumvirate's first priority. Thus, with the whole island as his base, Sextus had the time and resources to develop an army and, even more importantly, a strong navy operated by Sicilian marines.

Brutus and Cassius lost the twin battles of Philippi and committed suicide in 42 BC. After this, the triumvirs turned their attentions to Sicily and Sextus.

But by this time, Sextus was prepared for strong resistance. In the following years, military confrontations failed to return a conclusive victory for either side, although in 40 BC Sextus' admiral, the freedman Menas seized Sardinia from Octavian's governor Marcus Lurius. In 39 BC, Sextus and the triumvirs signed for peace in the Pact of Misenum. The reason for this peace treaty was the anticipated campaign against the Parthian Empire.

Antony, the leader, needed all the legions he could get so it was useful to secure an armistice in the Sicilian front. The peace did not last for long. Octavian and Antony's frequent quarrels were a strong political motivation for resuming the war against Sextus. Octavian tried again to conquer Sicily, but he was defeated in the naval battle of Messina (37 BC) and again in August 36 BC. But Octavian had Marcus Vipsanius Agrippa , a very talented general, on his side. Only a month afterwards, Agrippa destroyed Sextus' navy off Naulochus cape. Sextus escaped to Asia Minor and, by abandoning Sicily, lost his only base of support. Sextus Pompeius was caught in Miletus in 35 BC and executed without trial (an illegal act since Sextus was a Roman citizen) by order of Marcus Titius , Antony's minion.

His violent death would be one of the weapons used by Octavian against Antony several years later, when the situation between the two reached a boiling point. Sextus had married Scribonia, a distant relative of his.

Scribonia was the daughter of Lucius Scribonius Libo , consul of 34 BC. Sextus and Scribonia had a daughter and only child called Pompeia Magna.

48 BC - in Egypt with his father, who is assassinated. 47/45 BC resistance in Africa. 45 BC - defeated in Munda. 42 BC - controls Sicily with a powerful navy. 39 BC - pact of Misenum with Octavianus and Antony. 37 BC - defeats Octavian off Messina. September, defeated by Agrippa off Naulochus (Sicily). 35 BC - captured and executed in Asia Minor (Miletus). What is a certificate of authenticity and what guarantees do you give that the item is authentic? You will be quite happy with what you get with the COA; a professional presentation of the coin, with all of the relevant information and a picture of the coin you saw in the listing. Is there a number I can call you with questions about my order? When should I leave feedback? Once you receive your order, please leave a positive. Please don't leave any negative feedbacks, as it happens many times that people rush to leave feedback before letting sufficient time for the order to arrive. The matter of fact is that any issues can be resolved, as reputation is most important to me.

My goal is to provide superior products and quality of service. The item "Julius Caesar Enemy Pompey the Great son Sextus NGC VF Silver Roman Coin i57690" is in sale since Saturday, August 4, 2018. This item is in the category "Coins & Paper Money\Coins\ Ancient\Roman\ Republic (300 BC-27 BC)".