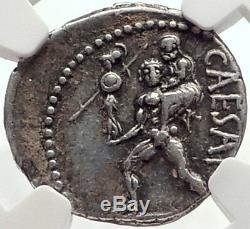 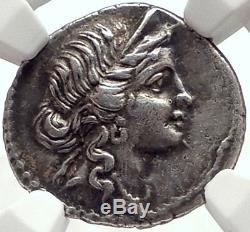 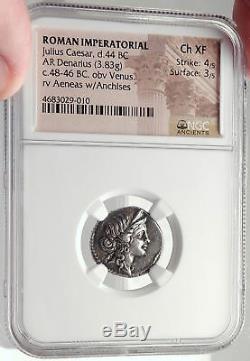 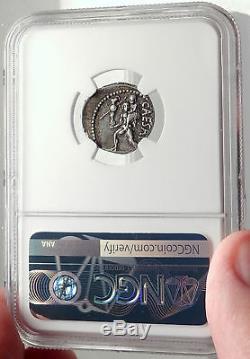 CAESAR, Aeneas walking left, carrying his father, Anchises and palladium. Venus was the patron-goddess of Julius Caesar, and also the goddess whom his family traces it's decent from, and therefore she is pictured on his coins. Caesar dedicated a temple to Venus Genetrix in the Forum Julium.

The Julia gens traced it's mythical descent also from Iulus, the son of Aenaeas. The story goes that Aeneas fled the burning ancient city of Troy, carrying his father on his back and the important statue called the palladium from that city. The Roman people, according to their mythology traced their decent from ancient Troy itself.

Anchises, being the mortal lover of Aphrodite (=Venus), having a son, Aeneas together, connects the mythical founders of Rome to their descent from the goddess Venus herself. A remarkable piece of ancient propaganda! Venus was a Roman goddess principally associated with love, beauty and fertility, who played a key role in many Roman religious festivals and myths.

From the third century BC, the increasing Hellenization of Roman upper classes identified her as the equivalent of the Greek goddess Aphrodite. Her cult began in Ardea and Lavinium, Latium. On August 15, 293 BC, her oldest known temple was dedicated, and August 18 became a festival called the Vinalia Rustica. After Rome's defeat at the Battle of Lake Trasimene in the opening episodes of the Second Punic War, the Sibylline oracle recommended the importation of the Sicillian Venus of Eryx; a temple to her was dedicated on the Capitoline Hill in 217 BC: a second temple to her was dedicated in 181 BC. Venus seems to have played a part in household or private religion of some Romans. Julius Caesar claimed her as an ancestor (Venus Genetrix); possibly a long-standing family tradition, certainly one adopted as such by his heir Augustus.

Venus statuettes have been found in quite ordinary household shrines (lararia). In fiction, Petronius places one among the Lares of the freedman Trimalchio's household shrine.

In Greek mythology, Anchises , was the son of Capys and Themiste (daughter of Ilus, who was son of Tros). He was the father of Aeneas and a member of the royal family of Troy. His major claim to fame in Greek mythology is that he was a mortal lover of the goddess Aphrodite (and in Roman mythology, the lover of Venus).

One version is that Aphrodite pretended to be a Phrygian princess and seduced him. She later revealed herself and informed him that they would have a son named Aeneas. Aphrodite had warned him that if he boasted of the affair, he would be blasted by the thunderbolt of Zeus. He did not heed her warning and was struck with a thunderbolt, which in different versions either blinds him or kills him.

The principal early narrative of Aphrodite's seduction of Anchises and the birth of Aeneas is the Homeric Hymn to Aphrodite. According to the Bibliotheca, Anchises and Aphrodite had another son, Lyrus, who died childless. He later had a mortal wife named Eriopis, according to the scholiasts, and he is credited with other children beside Aeneas and Lyrus. Homer, in the Iliad, mentions a daughter named Hippodameia, their eldest ("the darling of her father and mother"), who married her cousin Alcathous.

Aeneas Bearing Anchises from Troy, by Carle van Loo, 1729 (Louvre). After the defeat of Troy in the Trojan War, the elderly Anchises was carried from the burning city by his son Aeneas, accompanied by Aeneas' wife Creusa, who died in the escape attempt, and small son Ascanius. The subject is depicted in several paintings, including a famous version by Federico Barocci in the Galleria Borghese in Rome.

The rescue is also mentioned in a speech in Shakespeare's Julius Caesar when Cassius attempts to persuade Brutus to murder Caesar. Anchises himself died and was buried in Sicily many years later.

Aeneas later visited Hades and saw his father again in the Elysian Fields. Homer's Iliad mentions another Anchises, a wealthy native of Sicyon in Greece and father of Echepolus. In Greek and Roman mythology, the palladium or palladion was a cult image of great antiquity on which the safety of Troy and later Rome was said to depend, the wooden statue (xoanon) of Pallas Athena that Odysseus and Diomedes stole from the citadel of Troy and which was later taken to the future site of Rome by Aeneas. The Roman story is related in Virgil's Aeneid and other works.

In English, since around 1600, the word palladium has been used figuratively to mean anything believed to provide protection or safety, and in particular in Christian contexts a sacred relic or icon believed to have a protective role in military contexts for a whole city, people or nation. Such beliefs first become prominent in the Eastern church in the period after the reign of the Byzantine Emperor Justinian I, and later spread to the Western church. Palladia were carried in procession around the walls of besieged cities and sometimes carried into battle. Ajax the Lesser drags Cassandra from the Palladium.

Detail from a Roman fresco in the atrium of the Casa del Menandro (I 10, 4) in Pompeii. Gaius Julius Caesar (13 July 100 BC - 15 March 44 BC) was a Roman military and political leader. He played a critical role in the transformation of the Roman Republic into the Roman Empire. As a politician, Caesar made use of popularist tactics. During the late 60s and into the 50s BC, he formed political alliances that led to the so-called First Triumvirate, an extra-legal arrangement with Marcus Licinius Crassus and Gnaeus Pompeius Magnus (Pompey the Great) that was to dominate Roman politics for several years.

Their factional attempts to amass power for themselves were opposed within the Roman Senate by the optimates, among them Marcus Porcius Cato and Marcus Calpurnius Bibulus, with the sometime support of Marcus Tullius Cicero. Caesar's conquest of Gaul extended the Roman world to the North Sea, and in 55 BC he also conducted the first Roman invasion of Britain. These achievements granted him unmatched military power and threatened to eclipse Pompey's, while the death of Crassus contributed to increasing political tensions between the two triumviral survivors. Political realignments in Rome finally led to a stand-off between Caesar and Pompey, the latter having taken up the cause of the Senate. With the order that sent his legions across the Rubicon, Caesar began a civil war in 49 BC from which he emerged as the unrivaled leader of the Roman world.

After assuming control of government, he began extensive reforms of Roman society and government. He centralised the bureaucracy of the Republic and was eventually proclaimed "dictator in perpetuity" (dictator perpetuo). A group of senators, led by Marcus Junius Brutus, assassinated the dictator on the Ides of March (15 March) 44 BC, hoping to restore the normal running of the Republic.

However, the result was another Roman civil war, which ultimately led to the establishment of a permanent autocracy by Caesar's adopted heir, Gaius Octavianus. In 42 BC, two years after his assassination, the Senate officially sanctified Caesar as one of the Roman deities. Much of Caesar's life is known from his own Commentaries (Commentarii) on his military campaigns, and other contemporary sources such as the letters and speeches of his political rival Cicero, the historical writings of Sallust, and the poetry of Catullus. Many more details of his life are recorded by later historians, such as Appian, Suetonius, Plutarch, Cassius Dio and Strabo.

The item "JULIUS CAESAR 48BC Authentic Ancient Silver Roman Coin VENUS Certified NGC Ch XF" is in sale since Wednesday, November 14, 2018. This item is in the category "Coins & Paper Money\Coins\ Ancient\Roman\ Republic (300 BC-27 BC)". The seller is "victoram" and is located in Forest Hills, New York. This item can be shipped worldwide.