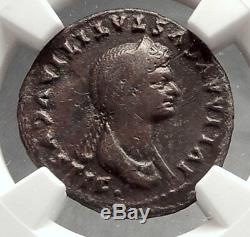 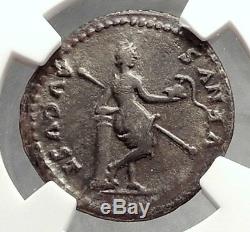 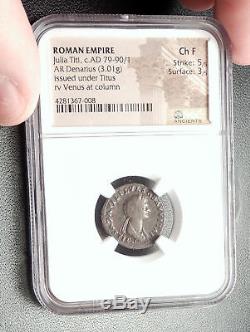 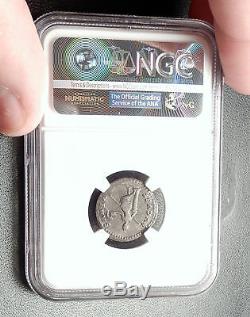 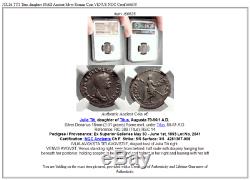 Venus was a Roman goddess principally associated with love, beauty and fertility, who played a key role in many Roman religious festivals and myths. From the third century BC, the increasing Hellenization of Roman upper classes identified her as the equivalent of the Greek goddess Aphrodite.

Her cult began in Ardea and Lavinium, Latium. On August 15, 293 BC, her oldest known temple was dedicated, and August 18 became a festival called the Vinalia Rustica. After Rome's defeat at the Battle of Lake Trasimene in the opening episodes of the Second Punic War, the Sibylline oracle recommended the importation of the Sicillian Venus of Eryx; a temple to her was dedicated on the Capitoline Hill in 217 BC: a second temple to her was dedicated in 181 BC. Venus seems to have played a part in household or private religion of some Romans. Julius Caesar claimed her as an ancestor (Venus Genetrix); possibly a long-standing family tradition, certainly one adopted as such by his heir Augustus.

Venus statuettes have been found in quite ordinary household shrines (lararia). In fiction, Petronius places one among the Lares of the freedman Trimalchio's household shrine. Julia Titi Flavia (13 September 64 - 91) was the daughter and only child to Emperor Titus from his second marriage to the well-connected Marcia Furnilla.

Her parents divorced when Julia was an infant, due to her mother's family being connected to the opponents of Roman Emperor Nero. In 65, after the failure of the Pisonian conspiracy, the family of Marcia Furnilla was disfavored by Nero. Julia's father, Titus considered that he didn't want to be connected with any potential plotters and ended his marriage to Marcia Furnilla.

Julia was raised by her father. Julia had been born in Rome and Titus conquered Jerusalem on Julia's sixth birthday. When growing up, Titus offered her in marriage to his brother Domitian, but he refused because of his infatuation with Domitia Longina. Later she married her second paternal cousin Titus Flavius Sabinus, brother to consul Titus Flavius Clemens, who married her first cousin Flavia Domitilla. By then Domitian had seduced her. When her father and husband died, in the words of Dio, Domitian. Lived with [her] as husband with wife, making little effort at concealment.

Then upon the demands of the people he became reconciled with Domitia, but continued his relations with Julia nonetheless. Juvenal condemns this liaison as follows. Such a man was that adulterer i.

Domitian who, after lately defiling himself by a union of the tragic style, revived the stern laws that were to be a terror to all men - ay, even to Mars and Venus - just as Julia was relieving her fertile womb and giving birth to abortions that displayed the likeness of her uncle. Becoming pregnant, Julia died of what was rumored (though unlikely) to be a forced abortion. Julia was deified and her ashes were later mixed and smoked with Domitian's by an old nurse secretly in the Temple of the Flavians. Titus Flavius Vespasianus , commonly known as Titus (December 30, 39 - September 13, 81), was a Roman Emperor who briefly reigned from 79 until his death in 81. Titus was the second emperor of the Flavian dynasty, which ruled the Roman Empire between 69 and 96, encompassing the reigns of Titus's father Vespasian (69-79), Titus himself (79-81) and his younger brother Domitian (81-96). Prior to becoming emperor, Titus gained renown as a military commander, serving under his father in Judaea during the First Jewish-Roman War, which was fought between 67 and 70. When Vespasian was declared emperor on July 1, 69, Titus was left in charge of ending the Jewish rebellion, which he did in 70, successfully besieging and destroying the city and the Temple of Jerusalem. For this achievement Titus was awarded a triumph; the Arch of Titus commemorates his victory to this day. Under the rule of his father, Titus gained infamy in Rome serving as prefect of the Roman imperial bodyguard, known as the Praetorian Guard, and for carrying on a controversial relationship with the Jewish queen Berenice. Despite concerns over his character, however, Titus ruled to great acclaim following the death of Vespasian on June 23, 79, and was considered a good emperor by Suetonius and other contemporary historians. In this role he is best known for his public building program in Rome-completing the Flavian Amphitheatre, otherwise known as the Colosseum- and for his generosity in relieving the suffering caused by two disasters, the Mount Vesuvius eruption of 79 and the fire of Rome of 80. After barely two years in office, Titus died of a fever on September 13, 81. He was deified by the Roman Senate and succeeded by his younger brother Domitian. World-renowned expert numismatist, enthusiast, author and dealer in authentic ancient Greek, ancient Roman, ancient Byzantine, world coins & more. Ilya Zlobin is an independent individual who has a passion for coin collecting, research and understanding the importance of the historical context and significance all coins and objects represent. Send me a message about this and I can update your invoice should you want this method. Getting your order to you, quickly and securely is a top priority and is taken seriously here. Great care is taken in packaging and mailing every item securely and quickly. What is a certificate of authenticity and what guarantees do you give that the item is authentic?

Visit the Guide on How to Use My Store. For on an overview about using my store, with additional information and links to all other parts of my store which may include educational information on topics you are looking for. The item "JULIA TITI Titus daughter 80AD Ancient Silver Roman Coin VENUS NGC Certif i66635" is in sale since Tuesday, January 16, 2018. This item is in the category "Coins & Paper Money\Coins\ Ancient\Roman\ Imperial (27 BC-476 AD)".