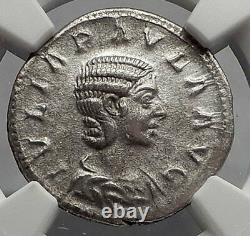 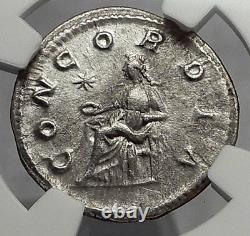 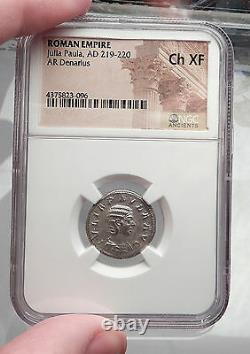 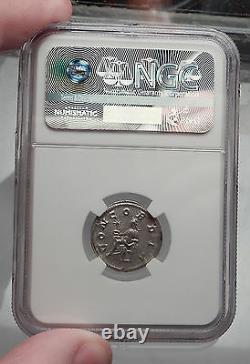 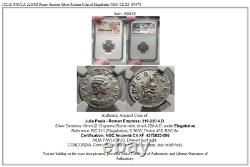 CONCORDIA, Concordia seated left, holding patera; star in left field. In Roman religion , Concord (Latin : Concordia, "harmony") was the goddess of agreement, understanding, and marital harmony. Her Greek version is Harmonia , and the Harmonians and some Discordians equate her with Aneris. Her opposite is Discordia (or the Greek Eris). The cult of Concordia Augusta ("Majestic Harmony") was of special importance to the imperial household.

Dedicatory inscriptions to her, on behalf of emperors and members of the imperial family, were common. The oldest Temple of Concord , built in 367 BC by Marcus Furius Camillus , stood on the Roman Forum.

Other temples and shrines in Rome dedicated to Concordia were largely geographically related to the main temple. Julia Cornelia Paula or Julia Paula was a distinguished, Roman noble woman who lived in the 3rd century. Paula was a member of the Cornelius (gens) of ancient Rome. She was a Syrian woman of Roman descent and her family was a distinguished family from Syria. Paula's father, Julius Cornelius Paulus was a prefect of the Praetorian Guard in Rome ; however, his ancestry is not known. Paula was well educated and was a charming person. In 219, Julia Maesa (eldest sister of Roman Empress Julia Domna), had arranged for Julia Cornelia Paula to marry her grandson, Rome's new emperor Elagabalus. Their wedding ceremony was a lavish ceremony that occurred in Rome. Paula became a Roman empress, as Elagabalus' first wife and was given the honorific title of Augusta. In early 220, Elagabalus ended his marriage to Paula. Elagabalus divorced Paula to marry the Vestal Virgin Julia Aquilia Severa.

His marriage to Severa was considered as scandalous because she was still a Vestal. Apart from falling in love with Severa, Elagabalus married Severa as apart of the religious process of worshipping the Syrian Sun God El-Gabal and integrating El-Gabal into Roman religion. After the divorce, Elagabalus removed Paula's Augusta title. She withdrew from public life and her fate afterwards is unknown. Ilya Zlobin, world-renowned expert numismatist, enthusiast, author and dealer in authentic ancient Greek, ancient Roman, ancient Byzantine, world coins & more.

Whether your goal is to collect or give the item as a gift, coins presented like this could be more prized and valued higher than items that were not given such care and attention to. Is there a number I can call you with questions about my order?

Visit the "Guide on How to Use My Store" for on an overview about using my store, with additional information and links to all other parts of my store which may include educational information on topics you are looking for. You may also want to do a YouTube search for the term "ancient coin collecting" for educational videos on this topic. The item "JULIA PAULA 220AD Rome Ancient Silver Roman Coin of Elagabalus NGC Ch XF i59978" is in sale since Monday, July 10, 2017. This item is in the category "Coins & Paper Money\Coins\ Ancient\Roman\ Imperial (27 BC-476 AD)". The seller is "highrating_lowprice" and is located in Rego Park, New York.