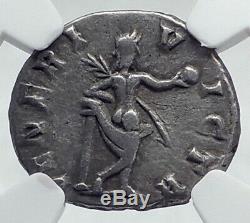 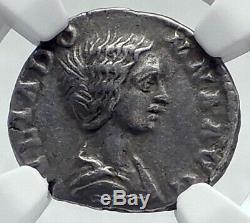 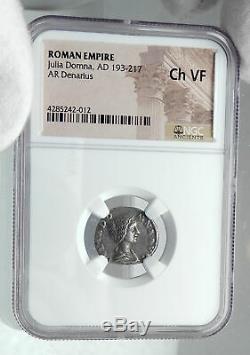 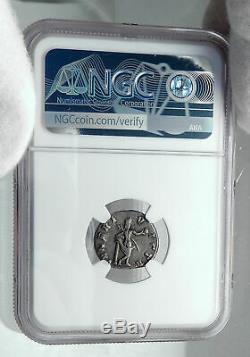 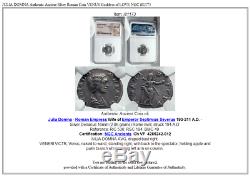 Item: i81173 Authentic Ancient Coin of. Silver Denarius 16mm (2.86 grams) Rome mint, struck 194 A. Reference: RIC 536; RSC 194; BMC 49 Certification: NGC Ancients. Ch VF 4285242-012 IVLIA DOMNA AVG, draped bust right. VENERI VICTR, Venus, naked to waist, standing right, with back to the spectator, holding apple and palm branch while resting left arm on column. Venus was a Roman goddess principally associated with love, beauty and fertility, who played a key role in many Roman religious festivals and myths. From the third century BC, the increasing Hellenization of Roman upper classes identified her as the equivalent of the Greek goddess Aphrodite. Her cult began in Ardea and Lavinium, Latium. On August 15, 293 BC, her oldest known temple was dedicated, and August 18 became a festival called the Vinalia Rustica. After Rome's defeat at the Battle of Lake Trasimene in the opening episodes of the Second Punic War, the Sibylline oracle recommended the importation of the Sicillian Venus of Eryx; a temple to her was dedicated on the Capitoline Hill in 217 BC: a second temple to her was dedicated in 181 BC. Venus seems to have played a part in household or private religion of some Romans. Julius Caesar claimed her as an ancestor (Venus Genetrix); possibly a long-standing family tradition, certainly one adopted as such by his heir Augustus.

Venus statuettes have been found in quite ordinary household shrines (lararia). In fiction, Petronius places one among the Lares of the freedman Trimalchio's household shrine. Julia Domna , Latin: Iulia Domna ; c.

170 AD - 217 AD was a member of the Severan dynasty of the Roman Empire. Empress and wife of Roman Emperor Lucius Septimius Severus and mother of Emperors Geta and Caracalla, Julia was famous for her prodigious learning as well as her extraordinary political influence. Julia Domna was born in Emesa (known today as Homs) in Syria.

She was the youngest daughter of the high-priest of Ba'al Gaius Julius Bassianus and sister to Julia Maesa, and she had two nieces: Julia Mamaea, mother of Severus Alexander, and Julia Soaemias, mother of Elagabalus. Her ancestors were Priest Kings of the famous temple of Elagabalus.

The family had enormous wealth and was promoted to Roman senatorial aristocracy. Before her marriage, Julia inherited the estate of her paternal great-uncle Julius Agrippa, a former leading Centurion. In the late 180s, Julia married future emperor Septimius Severus, usually considered to be of Punic background.

They had two sons, Lucius Septimius Bassianus (Caracalla) in 188 and Publius Septimius Geta in 189. Because of her love of philosophy, Julia protected philosophers and helped philosophy to flourish in Rome. She was an imperial woman from 193-217 CE as wife to the emperor Septimius Severus and mother to emperors Geta (murdered by Caracalla in 211 CE) and Caracalla r. Julia Domna died shortly after her son Caracalla was murdered.

Civil War or "Year of the Five Emperors". After Commodus was murdered without an heir in 192 CE, many contenders rushed for the throne. An elder senator, Pertinax, was appointed by the praetorian guard.

After bribing the guard, Iulianus was appointed emperor, and Pertinax was murdered. Septimius Severus, coming from the north into Rome, overthrew Iulianus and had him executed. Septimius claimed the title of emperor in 193, and co-ruled Rome with Clodius Albinus until 195 CE when Septimius declared his sons AVGVSTVS, and defeated Albinus and his British legions. Septimius remained at war with an eastern rival to the throne, Niger, until he defeated Niger's forces in 201 CE.

Julia Domna and her sons accompanied Septimius in his campaigns in the East. During this time, titles were granted to Julia Domna reminiscent of titles given to Faustina the Younger, including MATER CASTORVM, or mother of the camp, MATER AVGVSTVS, mother of Augustus, and MATER PATRIAE, or mother of the fatherland. Imperial Building Project: The aedes Vestae. The fire of Commodus in 192 CE destroyed areas of the aedes Vestae which includes the Temple of Vesta and the home, or Atrium, of the Vestal Virgins. Based on numismatic evidence, historical authors, and a laconic inscription found in situ , most scholars agree that Julia Domna funded restorations to the site during Septimius Severus's reign.

Controversy and transition of power. As empress, Julia was often involved in intrigues and had plenty of political enemies, who accused her of treason and adultery. None of these accusations was proven. Severus continued to favour his wife and insisted on her company in the campaign against the Britons that started in 208.

When Severus died in 211 in Eboracum (York), Julia became the mediator between their two sons, Caracalla and Geta, who were to rule as joint emperors, according to their father's wishes expressed in his will. The two young men were never fond of each other and quarrelled frequently.

Geta was murdered by Caracalla's soldiers in the same year. Caracalla was now sole emperor, but his relations with his mother were difficult, as attested by several sources, probably because of his involvement in Geta's murder. Nevertheless, Julia accompanied Caracalla in his campaign against the Parthian empire in 217.

During this trip, Caracalla was assassinated and succeeded (briefly) by Macrinus. Julia chose to commit suicide after hearing about the rebellion, perhaps a decision hastened by the fact that she was suffering from breast cancer. Her body was brought to Rome and placed in the Sepulcrum C. Caesaris (perhaps a separate chamber in the Mausoleum of Augustus). Later, however, both her bones and those of Geta were transferred by her sister Julia Maesa to the Mausoleum of Hadrian. If it were not for Julia, there would have survived little information about the philosopher Apollonius of Tyana. It was at the behest of Julia that Philostratus wrote his now famous Life of Apollonius of Tyana.

Please don't leave any negative feedbacks, as it happens sometimes that people rush to leave feedback before letting sufficient time for their order to arrive. The matter of fact is that any issues can be resolved, as reputation is most important to me. My goal is to provide superior products and quality of service. How and where do I learn more about collecting ancient coins? Visit the "Guide on How to Use My Store".

For on an overview about using my store, with additional information and links to all other parts of my store which may include educational information on topics you are looking for. The item "JULIA DOMNA Authentic Ancient Silver Roman Coin VENUS Goddess of LOVE NGC i81173" is in sale since Friday, October 25, 2019.