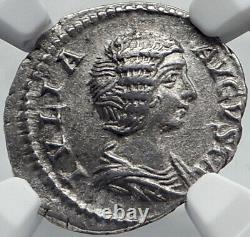 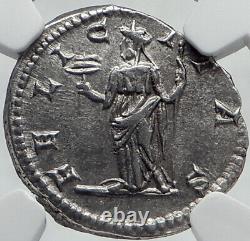 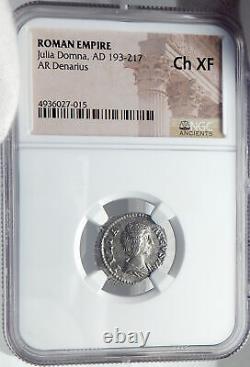 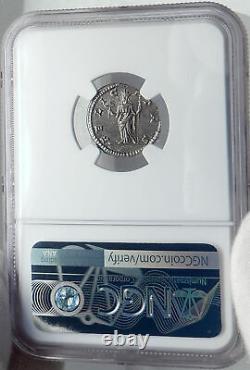 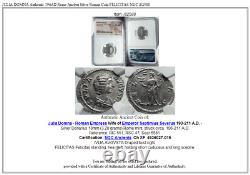 The divine personification of Felicitas was cultivated as a goddess. Although felicitas may be translated as "good luck, " and the goddess Felicitas shares some characteristics and attributes with Fortuna, the two were distinguished in Roman religion.

Fortuna was unpredictable and her effects could be negative, as the existence of an altar to Mala Fortuna ("Bad Luck") acknowledges. Felicitas, however, always had a positive significance. She appears with several epithets that focus on aspects of her divine power.

Felicitas had a temple in Rome as early as the mid-2nd century BC, and during the Republican era was honored at two official festivals of Roman state religion, on July 1 in conjunction with Juno and October 9 as Fausta Felicitas. Felicitas continued to play an important role in Imperial cult, and was frequently portrayed on coins as a symbol of the wealth and prosperity of the Roman Empire. Her primary attributes are the caduceus and cornucopia. The English word "felicity" derives from felicitas.

In its religious sense, felix means blessed, under the protection or favour of the gods; happy. That which is felix has achieved the pax divom, a state of harmony or peace with the divine world.

In archaic Roman culture, felicitas was a quality expressing the close bonds between religion and agriculture. Felicitas was at issue when the suovetaurilia sacrifice conducted by Cato the Elder as censor in 184 BC was challenged as having been unproductive, perhaps for vitium, ritual error. In the following three years Rome had been plagued by a number of ill omens and prodigies (prodigia), such as severe storms, pestilence, and "showers of blood, " which had required a series of expiations (supplicationes). The speech Cato gave to justify himself is known as the Oratio de lustri sui felicitate, "Speech on the Felicitas of his Lustrum", and survives only as a possible quotation by a later source. Cato says that a lustrum should be found to have produced felicitas "if the crops had filled up the storehouses, if the vintage had been abundant, if the olive oil had flowed deliberately from the groves", regardless of whatever else might have occurred.

The efficacy of a ritual might be thus expressed as its felicitas. The ability to promote felicitas became proof of one's excellence and divine favor. Felicitas was simultaneously a divine gift, a quality that resided within an individual, and a contagious capacity for generating productive conditions outside oneself: it was a form of "charismatic authority".

Cicero lists felicitas as one of the four virtues of the exemplary general, along with knowledge of military science (scientia rei militaris), virtus (both "valor" and "virtue"), and auctoritas, authority. Virtus was a regular complement to felicitas, which was not thought to attach to those who were unworthy. Cicero attributed felicitas particularly to Pompeius Magnus ("Pompey the Great"), and distinguished this felicitas even from the divine good luck enjoyed by successful generals such as Fabius Maximus, Marcellus, Scipio the Younger and Marius.

The sayings (sententiae) of Publilius Syrus are often attached to divine qualities, including Felicitas: "The people's Felicitas is powerful when she is merciful" (potens misericors publica est Felicitas). Augusta, the goddess in her association with the emperor and Imperial cult. Fausta ("Favored, Fortunate"), a state divinity cultivated on October 9 in conjunction with Venus Victrix and the Genius Populi Romani ("Genius" of the Roman People, also known as the Genius Publicus).

Publica, the "public" Felicitas; that is, the aspect of the divine force that was concerned with the res publica or commonwealth, or with the Roman People (Populus Romanus). Temporum, the Felicitas "of the times", a title which emphasize the felicitas being experienced in current circumstances. Julia Domna, Latin: Iulia Domna ; c. 170 AD - 217 AD was a member of the Severan dynasty of the Roman Empire.

Empress and wife of Roman Emperor Lucius Septimius Severus and mother of Emperors Geta and Caracalla, Julia was famous for her prodigious learning as well as her extraordinary political influence. Julia Domna was born in Emesa (known today as Homs) in Syria. She was the youngest daughter of the high-priest of Ba'al Gaius Julius Bassianus and sister to Julia Maesa, and she had two nieces: Julia Mamaea, mother of Severus Alexander, and Julia Soaemias, mother of Elagabalus. Her ancestors were Priest Kings of the famous temple of Elagabalus.

The family had enormous wealth and was promoted to Roman senatorial aristocracy. Before her marriage, Julia inherited the estate of her paternal great-uncle Julius Agrippa, a former leading Centurion. In the late 180s, Julia married future emperor Septimius Severus, usually considered to be of Punic background. They had two sons, Lucius Septimius Bassianus (Caracalla) in 188 and Publius Septimius Geta in 189.

Because of her love of philosophy, Julia protected philosophers and helped philosophy to flourish in Rome. She was an imperial woman from 193-217 CE as wife to the emperor Septimius Severus and mother to emperors Geta (murdered by Caracalla in 211 CE) and Caracalla r. Julia Domna died shortly after her son Caracalla was murdered. Civil War or "Year of the Five Emperors". After Commodus was murdered without an heir in 192 CE, many contenders rushed for the throne.

An elder senator, Pertinax, was appointed by the praetorian guard. After bribing the guard, Iulianus was appointed emperor, and Pertinax was murdered.

Septimius Severus, coming from the north into Rome, overthrew Iulianus and had him executed. Septimius claimed the title of emperor in 193, and co-ruled Rome with Clodius Albinus until 195 CE when Septimius declared his sons AVGVSTVS, and defeated Albinus and his British legions.

Septimius remained at war with an eastern rival to the throne, Niger, until he defeated Niger's forces in 201 CE. Julia Domna and her sons accompanied Septimius in his campaigns in the East. During this time, titles were granted to Julia Domna reminiscent of titles given to Faustina the Younger, including MATER CASTORVM, or mother of the camp, MATER AVGVSTVS, mother of Augustus, and MATER PATRIAE, or mother of the fatherland. Imperial Building Project: The aedes Vestae.

The fire of Commodus in 192 CE destroyed areas of the aedes Vestae which includes the Temple of Vesta and the home, or Atrium, of the Vestal Virgins. Based on numismatic evidence, historical authors, and a laconic inscription found in situ, most scholars agree that Julia Domna funded restorations to the site during Septimius Severus's reign. Controversy and transition of power. As empress, Julia was often involved in intrigues and had plenty of political enemies, who accused her of treason and adultery.

None of these accusations was proven. Severus continued to favour his wife and insisted on her company in the campaign against the Britons that started in 208. When Severus died in 211 in Eboracum (York), Julia became the mediator between their two sons, Caracalla and Geta, who were to rule as joint emperors, according to their father's wishes expressed in his will. The two young men were never fond of each other and quarrelled frequently. Geta was murdered by Caracalla's soldiers in the same year.

Caracalla was now sole emperor, but his relations with his mother were difficult, as attested by several sources, probably because of his involvement in Geta's murder. Nevertheless, Julia accompanied Caracalla in his campaign against the Parthian empire in 217. During this trip, Caracalla was assassinated and succeeded (briefly) by Macrinus. Julia chose to commit suicide after hearing about the rebellion, perhaps a decision hastened by the fact that she was suffering from breast cancer. Her body was brought to Rome and placed in the Sepulcrum C.

Caesaris (perhaps a separate chamber in the Mausoleum of Augustus). Later, however, both her bones and those of Geta were transferred by her sister Julia Maesa to the Mausoleum of Hadrian. If it were not for Julia, there would have survived little information about the philosopher Apollonius of Tyana. It was at the behest of Julia that Philostratus wrote his now famous Life of Apollonius of Tyana. Julia is thought to have died before Philostratus could finish his work of eight volumes. World-renowned expert numismatist, enthusiast, author and dealer in authentic ancient Greek, ancient Roman, ancient Byzantine, world coins & more. Ilya Zlobin is an independent individual who has a passion for coin collecting, research and understanding the importance of the historical context and significance all coins and objects represent.

My goal is to provide superior products and quality of service. How and where do I learn more about collecting ancient coins? Visit the "Guide on How to Use My Store". For on an overview about using my store, with additional information and links to all other parts of my store which may include educational information on topics you are looking for. This item is in the category "Coins & Paper Money\Coins: Ancient\Roman: Imperial (27 BC-476 AD)". The seller is "highrating_lowprice" and is located in this country: US. This item can be shipped worldwide.