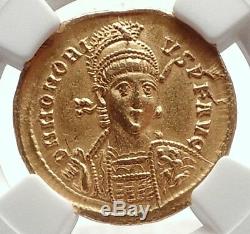 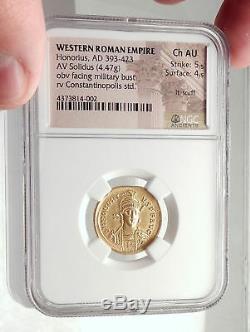 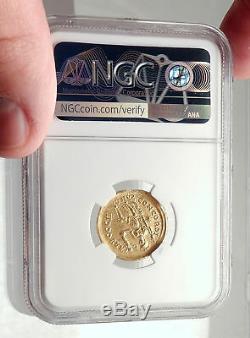 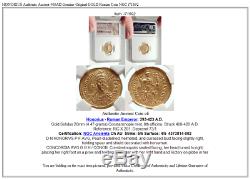 CONCORDIA AVG G G H / CONOB, Constantinopolis seated facing, her head turned to right, placing her right foot on a prow and holding a scepter with her right hand and Victory on globe in her left; in left field, star. Sole Reign except 421 A.

Ruling in the East: Theodosius I. Flavius Honorius (9 September 384 - 15 August 423) was Roman Emperor (393-395) and then Western Roman Emperor from 395 until his death. He was the younger son of Theodosius I and his first wife Aelia Flaccilla, and brother of the Eastern Emperor Arcadius. Even by the standards of the rapidly declining Western Empire, Honorius' reign was precarious and chaotic. His throne was guarded by his principal general, Flavius Stilicho, who was successively Honorius's guardian (during his childhood) and his father-in-law (after the emperor became an adult). Stilicho's generalship helped preserve some level of stability, but with his execution, the Western Roman Empire moved closer to collapse.

After holding the consulate at the age of two, Honorius was declared Augustus , and thus co-ruler, on 23 January 393 after the death of Valentinian II and the usurpation of Eugenius. When Theodosius died, in January 395, Honorius and Arcadius divided the Empire, so that Honorius became Western Roman Emperor at the age of ten. During the first part of his reign Honorius depended on the military leadership of the general Stilicho, who was of mixed Vandal and Roman ancestry.

To strengthen his bonds with the young emperor, Stilicho married his daughter Maria to him. The epithalamion written for the occasion by Stilicho's court poet Claudian survives. At first Honorius based his capital in Mediolanum, but when the Visigoths entered Italy in 402 he moved his capital to the coastal city of Ravenna, which was protected by a ring of marshes and strong fortifications. While the new capital was easier to defend, it was poorly situated to allow Roman forces to protect central Italy from the increasingly regular threat of barbarian incursions.

Erosion of the Western Roman Empire. Honorius' reign was plagued by many threats: from the barbarians entering within the Empire's borders to several usurpers.

A revolt led by Gildo, comes Africae , in Northern Africa lasted for two years (397-398). In 405, a barbarian army led by Radagaisus invaded Italy, bringing devastation to the heart of the Empire, until Stilicho defeated them in 406. The situation in Britannia was even more problematic.

The British provinces were isolated, lacking support from the Empire, and the soldiers supported the revolts of Marcus (406 - 407), Gratian (407), and Constantine "III". Constantine invaded Gaul in 407, occupying Arles. An invasion of Alans, Suevi and Vandals moved from Gaul on 31 December 406, and arrived in Hispania in 409. In 408, Stilicho (after forcing the Roman Senate to pay 4,000 pounds of gold) was arrested and executed by the order of Honorius, probably because of a court conspiracy against the Arian general. The Visigoths under their King Alaric I invaded Italy in 408, besieged Rome, and extorted from the city a ransom of 5,000 pounds of gold, 30,000 pounds of silver, 4,000 silken tunics, 3,000 hides dyed scarlet, and 3,000 pounds of pepper, while Honorius in Ravenna did nothing. In 410, the Eastern Roman Empire sent six Legions (6,000 men; late Roman legions were small units) to aid Honorius.

To counter Priscus, Honorius tried to negotiate with Alaric. Alaric withdrew his support for Priscus in 410, but the negotiations with Honorius broke down. Alaric again entered Italy and sacked Rome. The revolt of Constantine III in the west continued through this period.

In 409, Gerontius, Constantine III's general in Hispania, rebelled against him, proclaimed Maximus Emperor, and besieged Constantine at Arles. Honorius now found himself an able commander, Constantius, who defeated Maximus and Gerontius, and then Constantine, in 411.

Jovinus tried to negotiate with the invading Goths of Ataulf (412), but his proclamation of his brother Sebastianus as Augustus made Ataulf seek alliance with Honorius. Honorius had Ataulf settle the matter with Jovinus, and the rebel was defeated and executed in 413. In 414, Constantius attacked Ataulf, who proclaimed Priscus Attalus emperor again. Constantius drove Ataulf into Hispania, and Attalus, having again lost Visigoth support, was captured and deposed.

Northeastern Gaul became subject to even greater Frankish influence, while a treaty signed in 418 granted to the Visigoths the southwestern portion, the former Gallia Aquitania. In 417, Constantius married Honorius' sister, Galla Placidia. In 421, Honorius recognized him as co-emperor Constantius III, but he died early in 422. In 420-422, another Maximus (or perhaps the same) gained and lost power in Hispania. Honorius died of dropsy in 423, leaving no heir.

In the subsequent interregnum Joannes was nominated emperor. The following year, however, the Eastern Emperor Theodosius II elected emperor his cousin Valentinian III, son of Galla Placidia and Constantius III. The Favorites of the Emperor Honorius , by John William Waterhouse, 1883. The most notable event of his reign was the assault and Sack of Rome on August 24, 410 by the Visigoths under Alaric.

The city had been under Visigothic siege since shortly after Stilicho's deposition and execution in the summer of 408. Lacking a strong general to control the by-now mostly barbarian Roman Army, Honorius could do little to attack Alaric's forces directly, and apparently adopted the only strategy he could in the situation: wait passively for the Visigoths to grow weary and spend the time marshalling what forces he could. Unfortunately, this course of action appeared to be the product of Honorius' indecisive character and he suffered much criticism for it both from contemporaries and later historians. Whether this plan could have worked is perhaps debatable.

In any case it was overtaken by events. Stricken by starvation, somebody opened Rome's defenses to Alaric and the Goths poured in.

The city had not been under the control of a foreign force since an invasion of Gauls some eight centuries before. The sack itself was notably mild as sacks go; Churches and religious statuary went unharmed for example. The psychological blow to the Romans was considerably more painful. The shock of this event reverberated from Britain to Jerusalem, and inspired Augustine to write his magnum opus, The City of God. The year 410 also saw Honorius reply to a British plea for assistance against local barbarian incursions.

Preoccupied with the Visigoths, Honorius lacked any military capability to assist the distant province. 19th century engraving of Honorius, derived from his coinage. In his History of the Wars , Procopius mentions a story (which Gibbon disbelieved) where, on hearing the news that Rome had "perished", Honorius was initially shocked; thinking the news was in reference to a favorite chicken he had named "Roma", he recalled in disbelief that the bird was just recently feeding out of his hand. It was then explained to him that the Rome in question was the city. Summarizing his account of Honorius' reign, the historian J.

Bury wrote, His name would be forgotten among the obscurest occupants of the Imperial throne were it not that his reign coincided with the fatal period in which it was decided that western Europe was to pass from the Roman to the Teuton. " After listing the disasters of those 28 years, Bury concludes that Honorius "himself did nothing of note against the enemies who infested his realm, but personally he was extraordinarily fortunate in occupying the throne till he died a natural death and witnessing the destruction of the multitude of tyrants who rose up against him. Honorius issued a decree during his reign, prohibiting men from wearing trousers in Rome Codex Theodosianus 14.10.2-3, tr. Pharr, "The Theodosian Code, " p.

The last known gladiatorial fight took place during the reign of Honorius. World-renowned expert numismatist, enthusiast, author and dealer in authentic ancient Greek, ancient Roman, ancient Byzantine, world coins & more. Ilya Zlobin is an independent individual who has a passion for coin collecting, research and understanding the importance of the historical context and significance all coins and objects represent. Send me a message about this and I can update your invoice should you want this method. Getting your order to you, quickly and securely is a top priority and is taken seriously here. Great care is taken in packaging and mailing every item securely and quickly. What is a certificate of authenticity and what guarantees do you give that the item is authentic? You will be very happy with what you get with the COA; a professional presentation of the coin, with all of the relevant information and a picture of the coin you saw in the listing. Additionally, the coin is inside it's own protective coin flip (holder), with a 2x2 inch description of the coin matching the individual number on the COA. Whether your goal is to collect or give the item as a gift, coins presented like this could be more prized and valued higher than items that were not given such care and attention to. When should I leave feedback? Please don't leave any negative feedbacks, as it happens sometimes that people rush to leave feedback before letting sufficient time for their order to arrive. The matter of fact is that any issues can be resolved, as reputation is most important to me. My goal is to provide superior products and quality of service. How and where do I learn more about collecting ancient coins? Visit the Guide on How to Use My Store. For on an overview about using my store, with additional information and links to all other parts of my store which may include educational information on topics you are looking for.

The item "HONORIUS Authentic Ancient 408AD Genuine Original GOLD Roman Coin NGC i71692" is in sale since Saturday, October 13, 2018. This item is in the category "Coins & Paper Money\Coins\ Ancient\Roman\ Imperial (27 BC-476 AD)". The seller is "highrating_lowprice" and is located in Rego Park, New York. This item can be shipped worldwide.