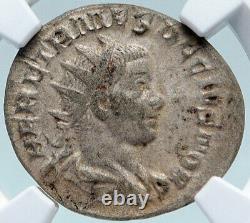 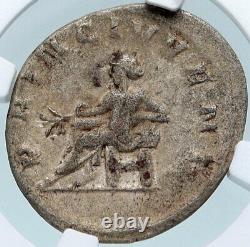 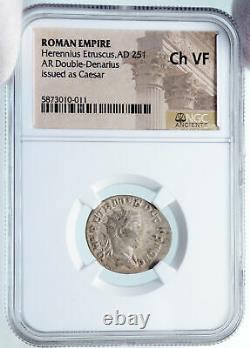 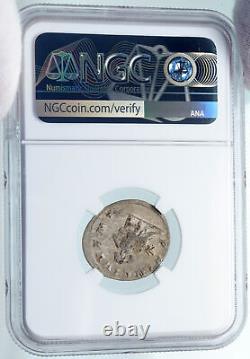 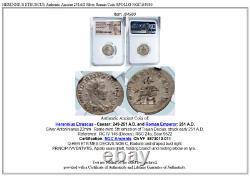 PRINCIPI IVVENTVTIS, Apollo seated left, holding branch and resting elbow on lyre. In Greek and Roman mythology, Apollo, is one of the most important and diverse of the Olympian deities. The ideal of the kouros (a beardless youth), Apollo has been variously recognized as a god of light and the sun; truth and prophecy; archery; medicine and healing; music, poetry, and the arts; and more. Apollo is the son of Zeus and Leto, and has a twin sister, the chaste huntress Artemis.

Apollo is known in Greek-influenced Etruscan mythology as Apulu. Apollo was worshiped in both ancient Greek and Roman religion, as well as in the modern Greco-Roman Neopaganism.

As the patron of Delphi (Pythian Apollo), Apollo was an oracular god - the prophetic deity of the Delphic Oracle. Medicine and healing were associated with Apollo, whether through the god himself or mediated through his son Asclepius, yet Apollo was also seen as a god who could bring ill-health and deadly plague as well as one who had the ability to cure. Amongst the god's custodial charges, Apollo became associated with dominion over colonists, and as the patron defender of herds and flocks. As the leader of the Muses (Apollon Musagetes) and director of their choir, Apollo functioned as the patron god of music and poetry. Hermes created the lyre for him, and the instrument became a common attribute of Apollo.

Hymns sung to Apollo were called paeans. In Hellenistic times, especially during the third century BCE, as Apollo Helios he became identified among Greeks with Helios, god of the sun, and his sister Artemis similarly equated with Selene, goddess of the moon.

In Latin texts, on the other hand, Joseph Fontenrose declared himself unable to find any conflation of Apollo with Sol among the Augustan poets of the first century, not even in the conjurations of Aeneas and Latinus in Aeneid XII (161-215). Apollo and Helios/Sol remained separate beings in literary and mythological texts until the third century CE. Herennius Etruscus Latin: Quintus Herennius Etruscus Messius Decius Augustus ; ca. 227 - June 251, was Roman emperor in 251, in a joint rule with his father Trajan Decius. Emperor Hostilian was his younger brother. Herennius was born in or near Sirmium in Pannonia (now Sremska Mitrovica, Serbia), during one of his father's military postings. His mother was Herennia Cupressenia Etruscilla, a Roman lady of an important senatorial family. Herennius was very close to his father and accompanied him in 248, as a military tribune, when Decius was appointed by Philip the Arab to deal with the revolt of Pacatianus in the Danube frontier. Decius was successful in defeating this usurper and felt confident to begin a rebellion of his own in the following year.

Acclaimed emperor by his own troops, Decius marched into Italy and defeated Philip near modern Verona. In Rome, Herennius was declared heir to the throne and received the title of princeps iuventutis (prince of youth). From the beginning of Herennius' accession, Gothic tribes raided across the Danube frontier and the provinces of Moesia and Dacia. At the beginning of 251, Decius elevated Herennius to the title of Augustus making him his co-emperor. Moreover, Herennius was chosen to be one of the year's consuls.

The father and son, now joint rulers, then embarked in an expedition against king Cniva of the Goths to punish the invaders for the raids. Hostilian remained in Rome and the empress Herennia Etruscilla was named regent. Cniva and his men were returning to their lands with the booty, when the Roman army encountered them. Showing a very sophisticated military tactic, Cniva divided his army in smaller, more manageable groups and started to push back the Romans into a marshy swamp.

Sometime during the first two weeks of June, both armies engaged in the battle of Abrittus. Herennius died in battle, struck by an enemy arrow. Decius survived the initial confrontation, only to be slain with the rest of the army before the end of the day. Herennius and Decius were the first two emperors to be killed by a foreign army in battle.

With the news of the death of the emperors, the army proclaimed Trebonianus Gallus emperor, but in Rome they were succeeded by Hostilian, who would die shortly afterwards in an outbreak of plague. World-renowned expert numismatist, enthusiast, author and dealer in authentic ancient Greek, ancient Roman, ancient Byzantine, world coins & more. Ilya Zlobin is an independent individual who has a passion for coin collecting, research and understanding the importance of the historical context and significance all coins and objects represent.