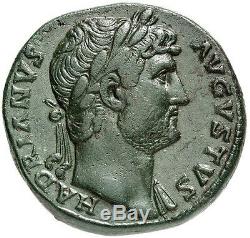 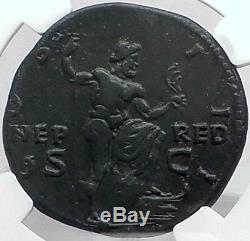 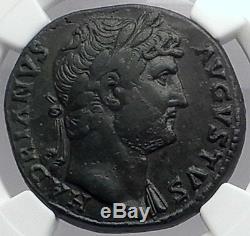 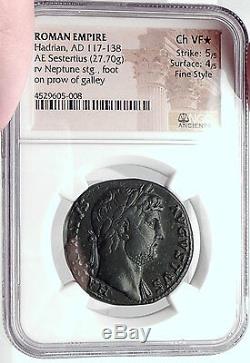 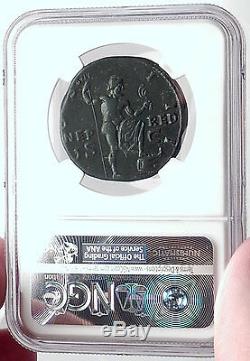 CERTIFIED AUTHENTIC by Sergey Nechayev, PhD - Numismatic Expert. Neptune (Latin: Neptnus) was the god of water and the sea in Roman mythology and religion. He is analogous with, but not identical to, the Greek god Poseidon. In the Greek-influenced tradition, Neptune was the brother of Jupiter and Pluto, each of them presiding over one of the three realms of the universe, Heaven, Earth and the Netherworld. Depictions of Neptune in Roman mosaics, especially those of North Africa, are influenced by Hellenistic conventions.

Unlike the Greek Oceanus, titan of the world-ocean, Neptune was associated as well with fresh water. Georges Dumézil suggested that for Latins, who were not a seafaring people, the primary identification of Neptune was with freshwater springs. Like Poseidon, Neptune was worshipped by the Romans also as a god of horses, under the name Neptunus Equester , a patron of horse-racing. Publius Aelius Hadrianus (as emperor Imperator Caesar Divi Traiani filius Traianus Hadrianus Augustus , and Divus Hadrianus after his apotheosis, known as Hadrian in English; 24 January 76 - 10 July 138) was emperor of Rome from AD 117 to 138, as well as a Stoic and Epicurean philosopher.

A member of the gens Aelia , Hadrian was the third of the so-called Five Good Emperors. Hadrian was born Publius Aelius Hadrianus in Italica or, less probably, in Rome, from a well-established family which had originated in Picenum in Italy and had subsequently settled in Italica, Hispania Baetica (the republican Hispania Ulterior), near the present day location of Seville, Spain. His predecessor Trajan was a maternal cousin of Hadrian's father. Trajan never officially designated a successor, but, according to his wife, Pompeia Plotina, Trajan named Hadrian emperor immediately before his death.

Trajan's wife was well-disposed toward Hadrian: Hadrian may well have owed his succession to her. Hadrian's presumed indebtedness to Plotina was widely regarded as the reason for Hadrian's succession. However, there is evidence that he accomplished his succession on his own governing and leadership merits while Trajan was still alive.

For example, between the years AD 100-108 Trajan gave several public examples of his personal favour towards Hadrian, such as betrothing him to his grandniece, Vibia Sabina, designating him quaestor Imperatoris , comes Augusti , giving him Nerva's diamond "as hope of succession", proposing him for consul suffectus , and other gifts and distinctions. The young Hadrian was Trajan's only direct male family/marriage/bloodline. The support of Plotina and of L.

Licinius Sura (died in AD 108) were nonetheless extremely important for Hadrian, already in this early epoch. The item "Hadrian 125AD Neptune Authentic Ancient Roman Coin NGC Certified ChVFFine Style" is in sale since Thursday, May 12, 2016. This item is in the category "Coins & Paper Money\Coins\ Ancient\Roman\ Imperial (27 BC-476 AD)". The seller is "victoram" and is located in Forest Hills, New York. This item can be shipped worldwide.