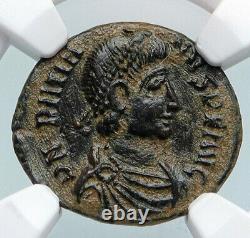 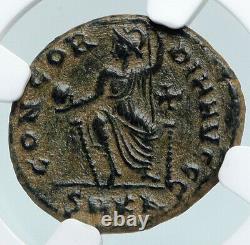 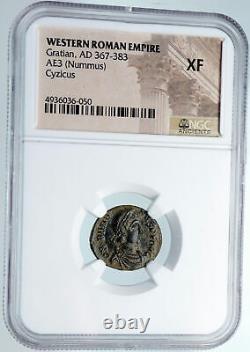 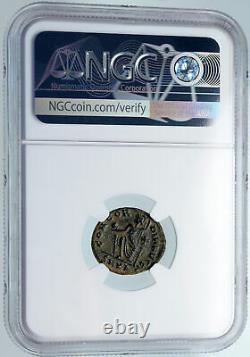 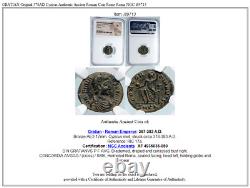 The eldest son of Valentinian I, during his youth Gratian accompanied his father on several campaigns along the Rhine and Danube frontiers. Upon the death of Valentinian in 375, Gratian's brother Valentinian II was declared emperor by his father's soldiers. In 378, Gratian's generals won a decisive victory over the Lentienses, a branch of the Alamanni, at the Battle of Argentovaria. Gratian subsequently led a campaign across the Rhine, the last emperor to do so, and attacked the Lentienses, forcing the tribe to surrender. That same year, his uncle Valens was killed in the Battle of Adrianople against the Goths - making Gratian essentially ruler of the entire Roman Empire. He favoured Christianity over traditional Roman religion, refusing the divine attributes of the Emperors and removing the Altar of Victory from the Roman Senate. Gratian was the son of Emperor Valentinian I by Marina Severa, and was born at Sirmium (now Sremska Mitrovica, Serbia) in Pannonia. He was named after his grandfather Gratian the Elder.

Gratian was first married to Flavia Maxima Constantia, daughter of Constantius II. His second wife was Laeta. His stepmother was Empress Justina and his paternal half siblings were Emperor Valentinian II, Galla and Justa.

On 24 August 367 he received from his father the title of Augustus. On the death of Valentinian (17 November 375), the troops in Pannonia proclaimed his infant son (by a second wife Justina) emperor under the title of Valentinian II. Gratian acquiesced in their choice; reserving for himself the administration of the Gallic provinces, he handed over Italy, Illyricum and Africa to Valentinian and his mother, who fixed their residence at Mediolanum. The division, however, was merely nominal, and the real authority remained in the hands of Gratian. Gratian's general Mallobaudes, a king of the Franks, and Naniemus, completely defeated the Lentienses, the southernmost branch of the Alamanni, in May 378 at the Battle of Argentovaria. Upon receiving news of the victory, Gratian personally led a campaign across the Upper Rhine into the territory of the Lentienses. After initial trouble facing the Lentienses on high ground, Gratian blockaded the enemy instead and received their surrender. The Lentienses were forced to supply young men to be levied into the Roman army, while the remainder were allowed to return home. Later that year, Valens met his death in the Battle of Adrianople on 9 August. Valens refused to wait for Gratian and his army to arrive and assist in defeating the host of Goths, Alans and Huns; as a result, two-thirds of the eastern Roman army were killed as well. In the same year, the government of the Eastern Empire devolved upon Gratian, but feeling himself unable to resist unaided the incursions of the barbarians, he promoted Theodosius I on 19 January 379 to govern that portion of the Empire. Gratianus and Theodosius then cleared the Illyricum of barbarians in the Gothic War (376-382).

For some years Gratian governed the Empire with energy and success but gradually sank into indolence, occupying himself chiefly with the pleasures of the chase, and became a tool in the hands of the Frankish general Merobaudes and bishop St. By taking into his personal service a body of Alans, and appearing in public in the dress of a Scythian warrior, after the disaster of the Battle of Adrianople, he aroused the contempt and resentment of his Roman troops.

A Roman general named Magnus Maximus took advantage of this feeling to raise the standard of revolt in Britain and invaded Gaul with a large army. Gratian, who was then in Paris, being deserted by his troops, fled to Lyon. There, through the treachery of the governor, Gratian was delivered over to one of the rebel generals, Andragathius, and assassinated on 25 August 383. The reign of Gratian forms an important epoch in ecclesiastical history, since during that period Nicene Christianity for the first time became dominant throughout the empire. Gratian also published an edict that all their subjects should profess the faith of the bishops of Rome and Alexandria i.

The move was mainly thrust at the various beliefs that had arisen out of Arianism, but smaller dissident sects, such as the Macedonians, were also prohibited. Gratian, under the influence of his chief advisor the Bishop of Milan Ambrose, took active steps to repress pagan worship. This brought to an end a period of widespread, if unofficial, religious tolerance that had existed since the time of Julian. "In the long truce between the hostile camps", writes historian Samuel Dill the pagan, the sceptic, even the formal, the lukewarm Christian, may have come to dream of a mutual toleration which would leave the ancient forms undisturbed but such men, living in a world of literary and antiquarian illusions, know little of the inner forces of the new Christian movement.

In 382, Gratian appropriated the income of the Pagan priests and Vestal Virgins, forbade legacies of real property to them and abolished other privileges belonging to the Vestals and to the pontiffs. He confiscated the personal possessions of the colleges of Pagan priests, which also lost all their privileges and immunities. Gratian declared that all of the Pagan temples and shrines were to be confiscated by the government and that their revenues were to be joined to the property of the royal treasury. He ordered another removal of the Altar of Victory from the Senate House at Rome, despite protests of the pagan members of the Senate, and confiscated its revenues.

Pagan Senators responded by sending an appeal to Gratian, reminding him that he was still the Pontifex Maximus and that it was his duty to see that the ancestral Pagan rites were properly performed. They appealed to Gratian to restore the Altar of Victory and the rights and privileges of the Vestal Virgins and priestly colleges. Gratian, at the urging of Ambrose, did not grant an audience to the Pagan Senators.

Moreover, he further renounced the title, office, and insignia of the Pontifex Maximus. Notwithstanding his actions, Gratian was still deified after his death. World-renowned expert numismatist, enthusiast, author and dealer in authentic ancient Greek, ancient Roman, ancient Byzantine, world coins & more. Ilya Zlobin is an independent individual who has a passion for coin collecting, research and understanding the importance of the historical context and significance all coins and objects represent.

Visit the Guide on How to Use My Store. For on an overview about using my store, with additional information and links to all other parts of my store which may include educational information on topics you are looking for. This item is in the category "Coins & Paper Money\Coins: Ancient\Roman: Imperial (27 BC-476 AD)".