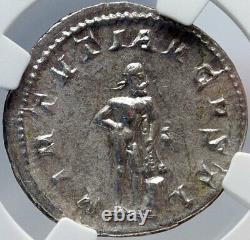 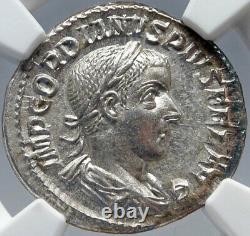 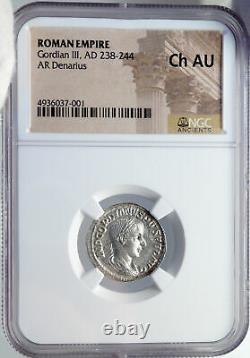 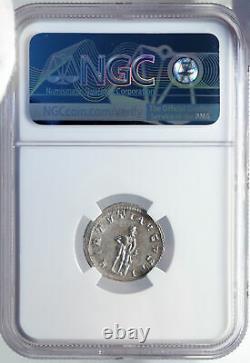 The model for this reverse type is the famed marble Farnese Hercules statue that was discovered in the excavations of the Btahs of Caracalla in 1546. It stood for over 200 year sin the Palazzo Farnese in Rome, from whence it gained its name, and was moved to Naples in 1787, where it is now displayed in the Museo Archeologico Nazionale. The statue is thought to be an enlarged copy sculpted in early 3rd Century AD by Glykon based on an original by Lysippos dating to the 4th century BC. The statue depicts Hercules at rest after completing his labors: he is shown standing with his club, draped in the skin of the Nemean lion, set upright on a rock, propped under his left arm supporting the weight of his muscular frame, his head slightly nodding forward in a weary attitude, and he holds the apples of the Hesperides behind his back in his right hand.

The sculpture was apparently well-liked by the Romans, and copies have been found in Roman palaces and gymnasiums. The Farnese Hercules (Italian: Ercole Farnese) is an ancient statue of Hercules, probably an enlarged copy made in the early third century AD and signed by Glykon, who is otherwise unknown; the name is Greek but he may have worked in Rome. Like much Ancient Roman sculpture it is a copy or version of a much older Greek original that was well-known, in this case an original by Lysippos (or one of his circle) that would have been made in the fourth century BC. The enlarged copy was made for the Baths of Caracalla in Rome (dedicated in 216 AD), where the statue was recovered in 1546, and is now in the Museo Archeologico Nazionale in Naples.

The heroically-scaled Hercules is one of the most famous sculptures of antiquity, and has fixed the image of the mythic hero in the European imagination. The Farnese Hercules is a massive marble statue, following a lost original cast in bronze through a method called lost wax casting.

It depicts a muscular, yet weary, Hercules leaning on his club, which has the skin of the Nemean lion draped over it. In myths about Heracles, killing the lion was his first task. He has just performed one of the last of The Twelve Labours, which is suggested by the apples of the Hesperides he holds behind his back. The type was well known in antiquity, and among many other versions a Hellenistic or Roman bronze reduction, found at Foligno is in the Musée du Louvre. A small Roman marble copy can be seen in the Museum of the Ancient Agora, Athens (see illustration).

Gordian III (Latin: Marcus Antonius Gordianus Pius Augustus ; 20 January 225 AD - 11 February 244 AD) was Roman Emperor from 238 AD to 244 AD. At the age of 13, he became the youngest sole legal Roman emperor throughout the existence of the united Roman Empire. Gordian was the son of Antonia Gordiana and an unnamed Roman Senator who died before 238. Antonia Gordiana was the daughter of Emperor Gordian I and younger sister of Emperor Gordian II. Very little is known of his early life before his acclamation. Gordian had assumed the name of his maternal grandfather in 238 AD. In 235, following the murder of Emperor Alexander Severus in Moguntiacum (modern Mainz), the capital of the Roman province Germania Superior, Maximinus Thrax was acclaimed Emperor. In the following years, there was a growing opposition against Maximinus in the Roman senate and amongst the majority of the population of Rome. In 238 a rebellion broke out in the Africa Province, where Gordian's grandfather and uncle, Gordian I and II, were proclaimed joint emperors.

Due to Gordian's age, the imperial government was surrendered to the aristocratic families, who controlled the affairs of Rome through the Senate. In 240, Sabinianus revolted in the African province, but the situation was quickly brought under control. In 241, Gordian was married to Furia Sabinia Tranquillina, daughter of the newly appointed praetorian prefect, Timesitheus. As chief of the Praetorian Guard and father in law of the Emperor, Timesitheus quickly became the de facto ruler of the Roman Empire.

In the 3rd century, the Roman frontiers weakened against the Germanic tribes across the Rhine and Danube, and the Sassanid Empire across the Euphrates increased its own attacks. When the Persians under Shapur I invaded Mesopotamia, the young emperor opened the doors of the Temple of Janus for the last time in Roman history, and sent a large army to the East.

The Sassanids were driven back over the Euphrates and defeated in the Battle of Resaena (243). The campaign was a success and Gordian, who had joined the army, was planning an invasion of the enemy's territory, when his father-in-law died in unclear circumstances. Without Timesitheus, the campaign, and the Emperor's security, were at risk.

Gaius Julius Priscus and, later on, his own brother Marcus Julius Philippus, also known as Philip the Arab, stepped in at this moment as the new Praetorian Prefects and the campaign proceeded. Around February 244, the Persians fought back fiercely to halt the Roman advance to Ctesiphon. Persian sources claim that a battle occurred (Battle of Misiche) near modern Fallujah (Iraq) and resulted in a major Roman defeat and the death of Gordian III.

Roman sources do not mention this battle and suggest that Gordian died far away from Misiche, at Zaitha (Qalat es Salihiyah) in northern Mesopotamia. Modern scholarship does not unanimously accept this course of the events. One view holds that Gordian died at Zaitha, murdered by his frustrated army, while the role of Philip is unknown.

Other scholars, such as Kettenhofen, Hartman and Winter have concluded that Gordian died in battle against the Sassanids. Philip transferred the body of the deceased emperor to Rome and arranged for his dei? Gordian's youth and good nature, along with the deaths of his grandfather and uncle and his own tragic fate at the hands of the enemy, earned him the lasting esteem of the Romans. The soldiers held Gordian in high esteem, as he had possibly sacrificed his life to save them in 244. World-renowned expert numismatist, enthusiast, author and dealer in authentic ancient Greek, ancient Roman, ancient Byzantine, world coins & more. Ilya Zlobin is an independent individual who has a passion for coin collecting, research and understanding the importance of the historical context and significance all coins and objects represent. Send me a message about this and I can update your invoice should you want this method. Getting your order to you, quickly and securely is a top priority and is taken seriously here. Great care is taken in packaging and mailing every item securely and quickly.