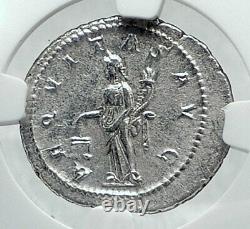 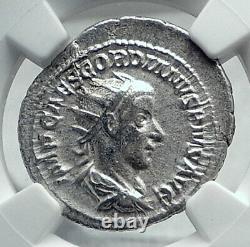 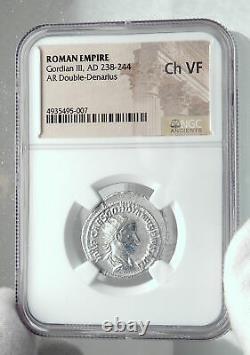 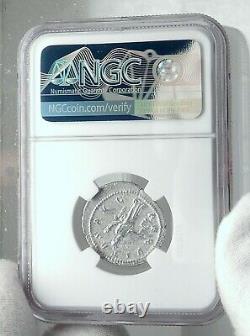 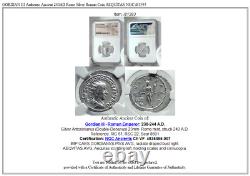 Aequitas (genitive aequitatis) is the Latin concept of justice, equality, conformity, symmetry, or fairness. It is the origin of the English word "equity". In ancient Rome, it could refer to either the legal concept of equity, or fairness between individuals. Cicero defined aequitas as "tripartite":the first, he said, pertained to the gods above (ad superos deos) and is equivalent to pietas, religious obligation; the second, to the Manes, the underworld spirits or spirits of the dead, and was sanctitas, that which is sacred; and the third pertaining to human beings (homines) was iustitia, "justice". During the Roman Empire, Aequitas as a divine personification was part of the religious propaganda of the emperor, under the name Aequitas Augusti, which also appeared on coins.

She is depicted on coins holding a cornucopia and a balance scale (libra), which was more often a symbol of "honest measure" to the Romans than of justice. Gordian III (Latin: Marcus Antonius Gordianus Pius Augustus ; 20 January 225 AD - 11 February 244 AD) was Roman Emperor from 238 AD to 244 AD. At the age of 13, he became the youngest sole legal Roman emperor throughout the existence of the united Roman Empire. Gordian was the son of Antonia Gordiana and an unnamed Roman Senator who died before 238. Antonia Gordiana was the daughter of Emperor Gordian I and younger sister of Emperor Gordian II.

However, their joint reign was doomed from the start with popular riots, military discontent and an enormous fire that consumed Rome in June 238. On July 29, Pupienus and Balbinus were killed by the Praetorian Guard and Gordian proclaimed sole emperor. Due to Gordian's age, the imperial government was surrendered to the aristocratic families, who controlled the affairs of Rome through the Senate. In 240, Sabinianus revolted in the African province, but the situation was quickly brought under control.

In 241, Gordian was married to Furia Sabinia Tranquillina, daughter of the newly appointed praetorian prefect, Timesitheus. As chief of the Praetorian Guard and father in law of the Emperor, Timesitheus quickly became the de facto ruler of the Roman Empire. In the 3rd century, the Roman frontiers weakened against the Germanic tribes across the Rhine and Danube, and the Sassanid Empire across the Euphrates increased its own attacks.

When the Persians under Shapur I invaded Mesopotamia, the young emperor opened the doors of the Temple of Janus for the last time in Roman history, and sent a large army to the East. The Sassanids were driven back over the Euphrates and defeated in the Battle of Resaena (243). The campaign was a success and Gordian, who had joined the army, was planning an invasion of the enemy's territory, when his father-in-law died in unclear circumstances.

Without Timesitheus, the campaign, and the Emperor's security, were at risk. Gaius Julius Priscus and, later on, his own brother Marcus Julius Philippus, also known as Philip the Arab, stepped in at this moment as the new Praetorian Prefects and the campaign proceeded. Around February 244, the Persians fought back fiercely to halt the Roman advance to Ctesiphon. Persian sources claim that a battle occurred (Battle of Misiche) near modern Fallujah (Iraq) and resulted in a major Roman defeat and the death of Gordian III. Roman sources do not mention this battle and suggest that Gordian died far away from Misiche, at Zaitha (Qalat es Salihiyah) in northern Mesopotamia.

Modern scholarship does not unanimously accept this course of the events. One view holds that Gordian died at Zaitha, murdered by his frustrated army, while the role of Philip is unknown. Other scholars, such as Kettenhofen, Hartman and Winter have concluded that Gordian died in battle against the Sassanids. Philip transferred the body of the deceased emperor to Rome and arranged for his dei? Gordian's youth and good nature, along with the deaths of his grandfather and uncle and his own tragic fate at the hands of the enemy, earned him the lasting esteem of the Romans.

The soldiers held Gordian in high esteem, as he had possibly sacrificed his life to save them in 244. World-renowned expert numismatist, enthusiast, author and dealer in authentic ancient Greek, ancient Roman, ancient Byzantine, world coins & more. Ilya Zlobin is an independent individual who has a passion for coin collecting, research and understanding the importance of the historical context and significance all coins and objects represent. Send me a message about this and I can update your invoice should you want this method.