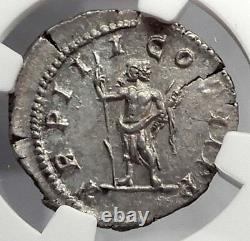 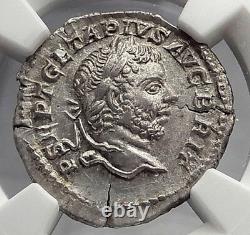 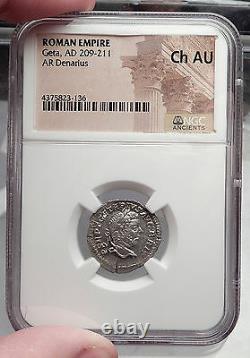 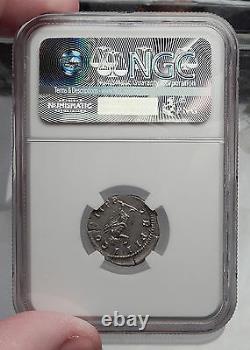 197 Certification: NGC Ancients Ch AU 4375823-136 P SEPT GETA PIVS AVG BRIT, Laureate head right. TR P III COS II P P, Janus standing left with scepter and thunderbolt. In ancient Roman religion and myth, Janus is the god of beginnings, gates, transitions, time, doorways, passages, and endings. He is usually depicted as having two faces, since he looks to the future and to the past.

It is conventionally thought that the month of January is named for Janus (Ianuarius), but according to ancient Roman farmers' almanacs Juno was the tutelary deity of the month. Janus presided over the beginning and ending of conflict, and hence war and peace. The doors of his temple were open in time of war, and closed to mark the peace. Janus had no flamen or specialised priest (sacerdos) assigned to him, but the King of the Sacred Rites (rex sacrorum) himself carried out his ceremonies.

Janus had a ubiquitous presence in religious ceremonies throughout the year, and was ritually invoked at the beginning of each one, regardless of the main deity honored on any particular occasion. The ancient Greeks had no equivalent to Janus, whom the Romans claimed as distinctively their own. (209-211 with Septimius Severus and Caracalla) 211 A. , was a Roman Emperor co-ruling with his father Septimius Severus and his older brother Caracalla from 209 to his death.

Geta was the younger son of Septimius Severus by his second wife Julia Domna. Geta was born in Rome, at a time when his father was only a provincial governor at the service of emperor Commodus. Geta was always in a place secondary to his older brother Lucius, the heir known as Caracalla. Perhaps due to this, the relations between the two were difficult from their early years. Conflicts were constant and often required the mediation of their mother. To appease his youngest son, Septimius Severus gave Geta the title of Augustus in 209. During the campaign against the Britons of the early 3rd century, the imperial propaganda publicized a happy family that shared the responsibilities of rule. Truth was that the rivalry and antipathy between the brothers was far from being improved. Regardless, the shared throne was not a success: the brothers argued about every decision, from law to political appointments.

Later sources speculate about the desire of the two of splitting the empire in two halves. By the end of the year, the situation was unbearable.

Caracalla tried to murder Geta during the festival of Saturnalia without success. Later in December he arranged a meeting with his brother in his mother's apartments, and had him murdered in her arms by centurions.

Following Geta's assassination, Caracalla damned his memoryy and ordered his name to be removed from all inscriptions. The now sole emperor also took the opportunity to get rid of his political enemies, on the grounds of conspiracy with the deceased. Cassius Dio stated that around 20,000 persons of both sexes were killed and/or proscribed during this time. Ilya Zlobin, world-renowned expert numismatist, enthusiast, author and dealer in authentic ancient Greek, ancient Roman, ancient Byzantine, world coins & more.

You will be very happy with what you get with the COA; a professional presentation of the coin, with all of the relevant information and a picture of the coin you saw in the listing. Additionally, the coin is inside it's own protective coin flip (holder), with a 2x2 inch description of the coin matching the individual number on the COA. Whether your goal is to collect or give the item as a gift, coins presented like this could be more prized and valued higher than items that were not given such care and attention to. Is there a number I can call you with questions about my order? When should I leave feedback? Please don't leave any negative feedbacks, as it happens sometimes that people rush to leave feedback before letting sufficient time for their order to arrive. The matter of fact is that any issues can be resolved, as reputation is most important to me. My goal is to provide superior products and quality of service. How and where do I learn more about collecting ancient coins? Visit the "Guide on How to Use My Store" for on an overview about using my store, with additional information and links to all other parts of my store which may include educational information on topics you are looking for.

You may also want to do a YouTube search for the term "ancient coin collecting" for educational videos on this topic. This item is in the category "Coins & Paper Money\Coins: Ancient\Roman: Imperial (27 BC-476 AD)". The seller is "highrating_lowprice" and is located in this country: US. This item can be shipped worldwide.