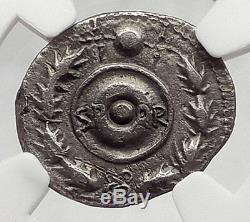 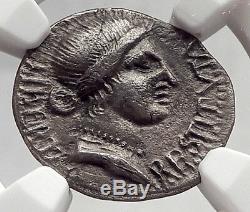 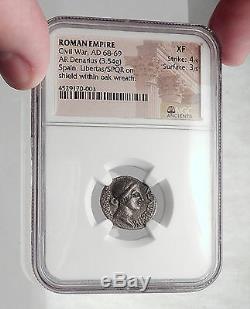 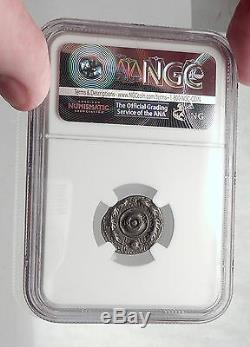 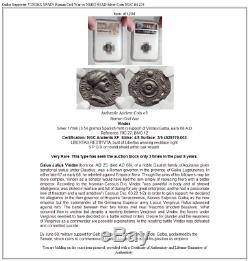 S P Q R on round shield within oak wreath. Gaius Julius Vindex born ca. AD 25; died AD 68, of a noble Gaulish family of Aquitania given senatorial status under Claudius , was a Roman governor in the province of Gallia Lugdunensis. In either late 67 or early 68, he rebelled against Emperor Nero. Though the aims of his followers may be more complex, Vindex as a senator would have had the aim simply of replacing Nero with a better emperor.

According to the historian Cassius Dio , Vindex "was powerful in body and of shrewd intelligence, was skilled in warfare and full of daring for any great enterprise; and he had a passionate love of freedom and a vast ambition" (Cassius Dio, 63.22.1-2). In order to gain support, he declared his allegiance to the then governor of Hispania Tarraconensis , Servius Sulpicius Galba , as the new emperor but the commander of the Germania Superior army, Lucius Verginius Rufus advanced against him. The battle between their two forces met near Vesontio (modern Besançon). What occurred then is unclear but despite a meeting between Verginius and Vindex, the forces under Verginius seemed to have decided on a battle without orders. Desire for plunder and the weakness of Verginius as a commander are possible explanations.

In the resulting battle Vindex was defeated and committed suicide. By June 68, military support for Galba led to Nero committing suicide. Galba, acclaimed by the Senate, struck coins to commemorate Vindex, to whom he owed his position as emperor.

You may also want to do a YouTube search for the term "ancient coin collecting" for educational videos on this topic. The item "Galba Supporter VINDEX SPAIN Roman Civil War vs NERO 68AD Silver Coin NGC i61204" is in sale since Sunday, April 30, 2017. This item is in the category "Coins & Paper Money\Coins\ Ancient\Roman\ Imperial (27 BC-476 AD)". The seller is "highrating_lowprice" and is located in Rego Park, New York.