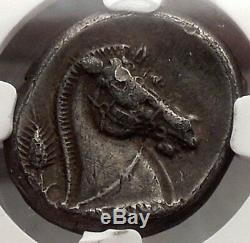 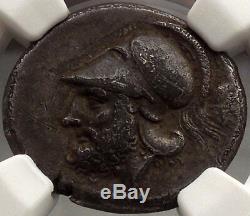 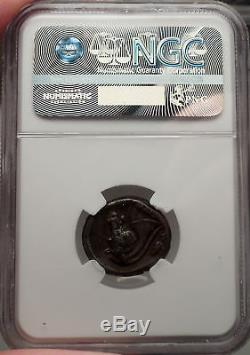 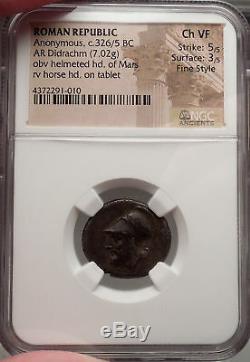 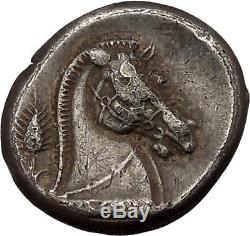 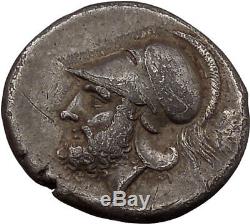 [6146] ROMAN REPUBLIC Anonymous Silver Didrachm 21mm, 7.01 gm. Reference: Crawford 13/1; Sydenham 1; HNItaly 266. Certification: NGC Ancients Choice VF Strike: 5/5 Surface: 3/5 Fine Style 4372291-010 Helmeted head of Mars left; behind, oak-spray. Horse's head right, on base inscribed [RO]MANO; behind, corn-ear. The first Roman silver coins were produced about the time of King Pyrrhus' invasion of Italy at the behest of the Tarentines (280 BC) and were struck on a weight standard derived from the currency of the Campanian city of Neapolis. This initial issue (Mars/horse's head) seems to have been produced at the Greek mint of Metapontum, an attribution strongly suggested by the ear of barley appearing behind the horse's head on the reverse. The dies for this first issue of Roman didrachms display the fine Greek style for which the Metapontine coinage was renowned. The head of Mars on the obverse is inspired by the portrait of Leukippos, the founder of Metapontum when it was resettled from Sybaris, which had appeared regularly on the Metapontine coinage in the latter part of the 4th century.

The item "First Silver Coin of ROMAN REPUBLIC 326 BC NGC Certified Choice VF Fine Style" is in sale since Wednesday, February 12, 2014. This item is in the category "Coins & Paper Money\Coins\ Ancient\Roman\ Republic (300 BC-27 BC)". The seller is "victoram" and is located in Forest Hills, New York. This item can be shipped worldwide.