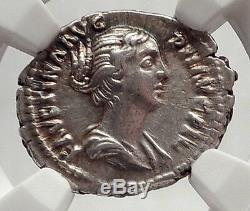 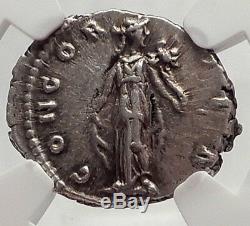 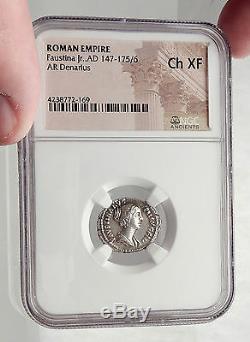 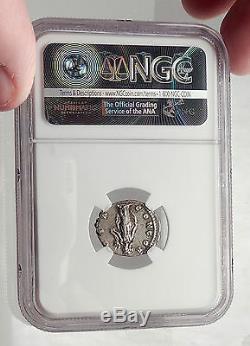 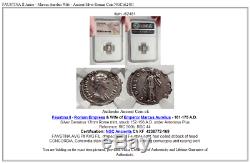 Ch XF 4238772-169 FAVSTINA AVG PII AVG FIL, draped bust of Faustina right, hair coiled at back of head. CONCORDIA, Concordia standing facing, head right, holding cornucopia and raising skirt. In ancient Roman religion, Concordia is the goddess who embodies agreement in marriage and society. Her Greek equivalent is usually regarded as Harmonia, with musical harmony a metaphor for an ideal of social concord or entente in the political discourse of the Republican era. She was thus often associated with Pax ("Peace") in representing a stable society. As such, she is more closely related to the Greek concept of homonoia (likemindedness), which was also represented by a goddess. Concordia Augusta was cultivated in the context of Imperial cult.

Dedicatory inscriptions to her, on behalf of emperors and members of the imperial family, were common. In art, Concordia was depicted sitting, wearing a long cloak and holding onto a patera (sacrificial bowl), a cornucopia (symbol of prosperity), or a caduceus (symbol of peace). She was often shown in between two other figures, such as standing between two members of the Imperial family shaking hands. She was associated with a pair of female deities, such as Pax and Salus, or Securitas and Fortuna.

Paired "Security and Luck" could also be represented by Hercules and Mercury. The oldest Temple of Concord, built in 367 BC by Marcus Furius Camillus, stood on the Roman Forum. Other temples and shrines in Rome dedicated to Concordia were largely geographically related to the main temple, and included (in date order). A bronze shrine (aedicula) of Concord erected by the aedile Gnaeus Flavius in 304 BC "in Graecostasis" and "in area Volcani" (placing it on the Graecostasis, close to the main temple of Concord). It must have been destroyed when the main temple was enlarged by Opimius in 121 BC. One built on the arx (probably on the east side, overlooked the main temple of Concord below). It was probably vowed by the praetor Lucius Manlius in 218 BC after quelling a mutiny among his troops in Cisalpine Gaul, with building work commencing in 217 and dedication occurring on 5 February 216. A temple to Concordia Nova, marking the end Julius Caesar had brought to civil war. It was voted by the senate in 44 BC. But was possibly never built. A temple built by Livia according to Ovid's Fasti VI. 637638 ("te quoque magnifica, Concordia, dedicat aede Livia quam caro praestitit ipsa viro" - the only literary reference to this temple). The description of the Porticus Liviae follows immediately, and it is probable therefore that the temple was close to or within the porticus, but the small rectangular structure marked on the Marble Plan frg.

10 can hardly have been a temple deserving of the epithet "magnifica" (HJ 316). In Pompeii, the high priestess Eumachia dedicated a building to Concordia Augusta.

Though Roman sources give a generally negative view of her character, she was held in high esteem by soldiers and her own husband and was given divine honours after her death. Faustina, named after her mother, was her parents' fourth and youngest child and their second daughter; she was also their only child to survive to adulthood.

She was born and raised in Rome. Her great uncle, the Emperor Hadrian, had arranged with her father for Faustina to marry Lucius Verus. On February 25, 138, she and Verus were betrothed.

Verus' father was Hadrian's first adopted son and his intended heir. However when Verus' father died, Hadrian chose Faustina's father to be his second adopted son, and eventually, he became Hadrian's successor. Faustina's father ended the engagement between his daughter and Verus and arranged for Faustina's betrothal to her maternal cousin, Marcus Aurelius; Aurelius was also adopted by her father. On May 13, 145, Faustina and Marcus Aurelius were married. When her father died on March 7, 161, her husband and Lucius Verus succeeded to her father's throne and became co-rulers.

Faustina was given the title of Augusta and became Empress. Unfortunately, not much has survived from the Roman sources regarding Faustina's life, but what is available does not give a good report.

Cassius Dio and the Augustan History accuse Faustina of ordering deaths by poison and execution; she has also been accused of instigating the revolt of Avidius Cassius against her husband. The Augustan History mentions adultery with sailors, gladiators, and men of rank.

However, Faustina and Aurelius seem to have been very close and mutually devoted. Her husband trusted her and defended her vigorously against detractors.

Faustina accompanied her husband on various military campaigns and enjoyed the love and reverence of Roman soldiers. Aurelius gave her the title of Mater Castrorum or Mother of the Camp. Between 170-174, she was in the north, and in 175, she accompanied Aurelius to the east.

However, these experiences took their toll on Faustina, who died in the winter of 175, after an accident, at the military camp in Halala (a city in the Taurus Mountains in Cappadocia). Aurelius grieved much for his wife and buried her in the Mausoleum of Hadrian in Rome. She was deified: her statue was placed in the Temple of Venus in Rome and a temple was dedicated to her in her honor. Halala's name was changed to Faustinopolis and Aurelius opened charity schools for orphan girls called Puellae Faustinianae or'Girls of Faustina'.

The Baths of Faustina in Miletus are named after her. In their thirty years of marriage, Faustina bore Marcus Aurelius thirteen children. Annia Aurelia Galeria Faustina (147-after 165). Gemellus Lucillae (died around 150), twin brother of Lucilla.

For on an overview about using my store, with additional information and links to all other parts of my store which may include educational information on topics you are looking for. The item "FAUSTINA II Junior Marcus Aurelius Wife Ancient Silver Roman Coin NGC i62481" is in sale since Sunday, July 16, 2017. This item is in the category "Coins & Paper Money\Coins\ Ancient\Roman\ Imperial (27 BC-476 AD)".