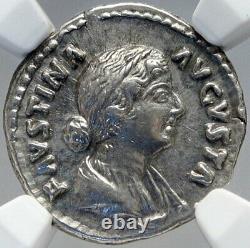 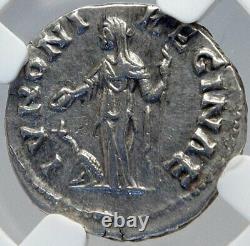 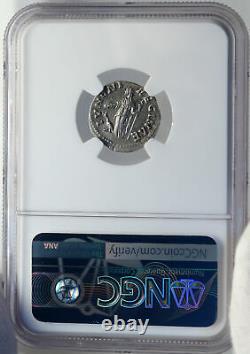 IVNONI REGINAE, Juno standing left, holding patera and scepter, peacock at foot left. Juno , called Hera by the Greeks. The word Ju-no contains the same root as Ju-piter. As Jupiter is the king of heaven and of the gods, so Juno is the queen of heaven, or the female Jupiter. She was worshipped at Rome as the queen of heaven, from early times, with the surname of Regina. At a later period her worship was solemnly transferred from Veii to Rome, where a sanctuary was dedicated to her on the Aventine. As Jupiter was the protector of the male sex, so Juno watched over the female sex. She was supposed to accompany every woman through life, from the moment of her birth to her death. Hence she bore the special surnames of Virginalis and Matrona , as well as the general ones of Opigena and Sospita and under the last mentioned name she was worshipped at Lanuvium. On their birthday, women offered sacrifices to Juno surnamed Natatlis , just as men sacrificed to their genius natalis. The great festival, celebrated by all the women, in honour of Juno, was called Matronalia , and took place on the 1st of March. Her protection of women, and especially her power of making them fruitful, is further alluded to in the festival Populifugia , as well as in the surname of Februlis , Februata , Februta , or Februalis. Juno was further, like Saturn, the guardian of the finances, and under the name of Moneta she had a temple on the Capitoline hill, which contained the mint. The most important period in a woman's life is that of her marriage, and she was therefore believed especially to preside over marriage. Hence she was called Juga or Jugalis , and had a variety of other names, such as Pronuba , Cinxia. The month of June, which is said to have been originally called Junonius, was considered to be the most favourable period for marrying.

Women in childbed invoked Juno Lucina to help them, and newly-born children were likewise under her protection : hence she was sometimes confounded with the Greek Artemis or Ilithyia. In Etruria she was worshipped under the name of Cupra. She was also worshipped at Falerii, Lanuvium, Aricia, Tibur, Praeneste, and other places.

In the representations of the Roman Juno that have come down to us, the type of the Greek Hera is commonly adopted. Annia Galeria Faustina Minor (Minor Latin for the younger), Faustina Minor or Faustina the Younger (February 16 between 125 and 130-175) was a daughter of Roman Emperor Antoninus Pius and Roman Empress Faustina the Elder. She was a Roman Empress and wife to her maternal cousin Roman Emperor Marcus Aurelius. Though Roman sources give a generally negative view of her character, she was held in high esteem by soldiers and her own husband and was given divine honours after her death. Faustina, named after her mother, was her parents' fourth and youngest child and their second daughter; she was also their only child to survive to adulthood. She was born and raised in Rome. Her great uncle, the Emperor Hadrian, had arranged with her father for Faustina to marry Lucius Verus. On February 25, 138, she and Verus were betrothed. Verus' father was Hadrian's first adopted son and his intended heir. However when Verus' father died, Hadrian chose Faustina's father to be his second adopted son, and eventually, he became Hadrian's successor. Faustina's father ended the engagement between his daughter and Verus and arranged for Faustina's betrothal to her maternal cousin, Marcus Aurelius; Aurelius was also adopted by her father. On May 13, 145, Faustina and Marcus Aurelius were married. When her father died on March 7, 161, her husband and Lucius Verus succeeded to her father's throne and became co-rulers.

Faustina was given the title of Augusta and became Empress. Unfortunately, not much has survived from the Roman sources regarding Faustina's life, but what is available does not give a good report. Cassius Dio and the Augustan History accuse Faustina of ordering deaths by poison and execution; she has also been accused of instigating the revolt of Avidius Cassius against her husband. The Augustan History mentions adultery with sailors, gladiators, and men of rank.

However, Faustina and Aurelius seem to have been very close and mutually devoted. Her husband trusted her and defended her vigorously against detractors. Faustina accompanied her husband on various military campaigns and enjoyed the love and reverence of Roman soldiers. Aurelius gave her the title of Mater Castrorum or Mother of the Camp. Between 170-174, she was in the north, and in 175, she accompanied Aurelius to the east. However, these experiences took their toll on Faustina, who died in the winter of 175, after an accident, at the military camp in Halala (a city in the Taurus Mountains in Cappadocia).

Aurelius grieved much for his wife and buried her in the Mausoleum of Hadrian in Rome. She was deified: her statue was placed in the Temple of Venus in Rome and a temple was dedicated to her in her honor. Halala's name was changed to Faustinopolis and Aurelius opened charity schools for orphan girls called Puellae Faustinianae or'Girls of Faustina'.

The item "FAUSTINA II Jr Wife of MARCUS AURELIUS Ancient Silver Roman Coin NGC i82609" is in sale since Tuesday, March 3, 2020. This item is in the category "Coins & Paper Money\Coins\ Ancient\Roman\ Imperial (27 BC-476 AD)". The seller is "highrating_lowprice" and is located in Rego Park, New York.