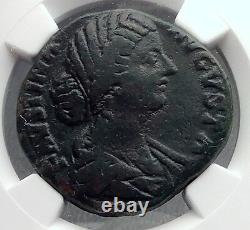 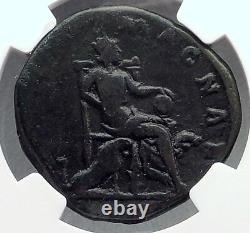 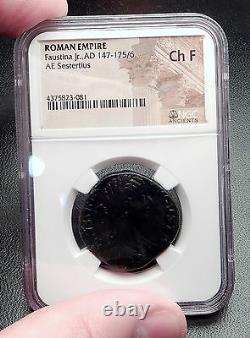 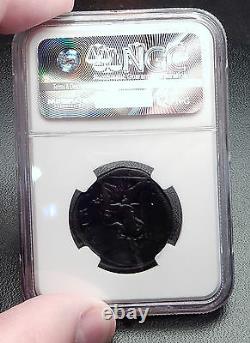 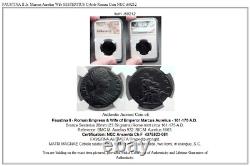 Item: i60212 Authentic Ancient Coin of. Faustina II - Roman Empress & Wife of Emperor Marcus Aurelius - 161-175 A. Bronze Sesterius 28mm (23.39 grams) Rome mint circa 161-175 A. Certification: NGC Ancients Ch F 4375823-081 FAVSTINA - AVGVSTA Draped bust right. MATRI - MAGNAE Cybele seated right, holding drum; at her side, two lions; in exergue, S C. Cybele (Phrygian : Matar Kubileya/Kubeleya " Kubeleyan Mother", perhaps " Mountain Mother"; Lydian Kuvava ; Greek : Kybele,) was an originally Anatolian mother goddess. Little is known of her oldest Anatolian cults, other than her association with mountains, hawks and lions. She may have been Phrygia's state deity; her Phrygian cult was adopted and adapted by Greek colonists of Asia Minor and spread from there to mainland Greece and its more distant western colonies from around the 6th century BCE. In Greece, Cybele met with a mixed reception. She was partially assimilated to aspects of the Earth-goddess Gaia, her Minoan equivalent Rhea, and the Corn-Mother goddess Demeter. Some city-states, notably Athens, evoked her as a protector, but her most celebrated Greek rites and processions show her as an essentially foreign, exotic mystery-goddess who arrives in a lion-drawn chariot to the accompaniment of wild music, wine, and a disorderly, ecstatic following. Uniquely in Greek religion, she had a transgender or eunuch mendicant priesthood.

Many of her Greek cults included rites to a divine Phrygian castrate shepherd-consort Attis, who was probably a Greek invention. In Greece, Cybele is associated with mountains, town and city walls, fertile nature, and wild animals, especially lions. In Rome, Cybele was known as Magna Mater ("Great Mother"). The Roman State adopted and developed a particular form of her cult, and claimed her conscription as a key religious component in their success against Carthage during the Punic Wars. Roman mythographers reinvented her as a Trojan goddess, and thus an ancestral goddess of the Roman people by way of the Trojan prince Aeneas.

With Rome's eventual hegemony over the Mediterranean world, Romanised forms of Cybele's cults spread throughout the Roman Empire. The meaning and morality of her cults and priesthoods were topics of debate and dispute in Greek and Roman literature, and remain so in modern scholarship. Annia Galeria Faustina Minor (Minor Latin for the younger), Faustina Minor or Faustina the Younger.

Between 125 and 130-175 was a daughter of Roman Emperor Antoninus Pius and Roman Empress Faustina the Elder. She was a Roman Empress and wife to her maternal cousin Roman Emperor Marcus Aurelius. Though Roman sources give a generally negative view of her character, she was held in high esteem by soldiers and her own husband and was given divine honours after her death. Faustina, named after her mother, was her parents' fourth and youngest child and their second daughter; she was also their only child to survive to adulthood.

She was born and raised in Rome. Her great uncle, the Emperor Hadrian, had arranged with her father for Faustina to marry Lucius Verus. On February 25, 138, she and Verus were betrothed. Verus' father was Hadrian's first adopted son and his intended heir.

When her father died on March 7, 161, her husband and Lucius Verus succeeded to her father's throne and became co-rulers. Faustina was given the title of Augusta and became Empress. Unfortunately, not much has survived from the Roman sources regarding Faustina's life, but what is available does not give a good report. Cassius Dio and the Augustan History accuse Faustina of ordering deaths by poison and execution; she has also been accused of instigating the revolt of Avidius Cassius against her husband.

The Augustan History mentions adultery with sailors, gladiators, and men of rank. However, Faustina and Aurelius seem to have been very close and mutually devoted. Her husband trusted her and defended her vigorously against detractors. Faustina accompanied her husband on various military campaigns and enjoyed the love and reverence of Roman soldiers.

Aurelius gave her the title of Mater Castrorum or Mother of the Camp. Between 170-174, she was in the north, and in 175, she accompanied Aurelius to the east.

However, these experiences took their toll on Faustina, who died in the winter of 175, after an accident, at the military camp in Halala (a city in the Taurus Mountains in Cappadocia). Aurelius grieved much for his wife and buried her in the Mausoleum of Hadrian in Rome. She was deified: her statue was placed in the Temple of Venus in Rome and a temple was dedicated to her in her honor. Halala's name was changed to Faustinopolis and Aurelius opened charity schools for orphan girls called Puellae Faustinianae or'Girls of Faustina'. The Baths of Faustina in Miletus are named after her.

How and where do I learn more about collecting ancient coins? Visit the "Guide on How to Use My Store" for on an overview about using my store, with additional information and links to all other parts of my store which may include educational information on topics you are looking for. You may also want to do a YouTube search for the term "ancient coin collecting" for educational videos on this topic. This item is in the category "Coins & Paper Money\Coins: Ancient\Roman: Imperial (27 BC-476 AD)". The seller is "highrating_lowprice" and is located in this country: US.