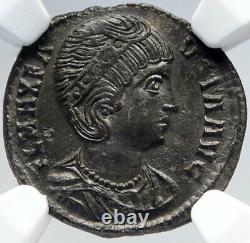 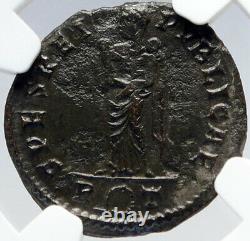 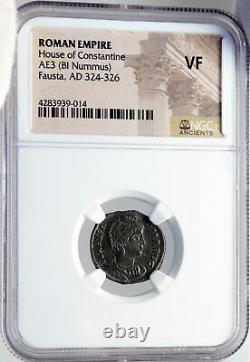 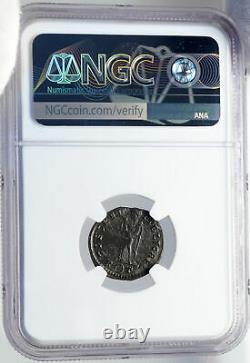 AU 4284661-140 FL MAX FAVSTA AVG, Draped bust of Fausta right. SPES REIPVBLICAE / R(wreath)T, Fausta, as goddess Spes, holding her two sons, Constantine II. In ancient Roman religion, Spes was the goddess of hope. Multiple temples to Spes are known, and inscriptions indicate that she received private devotion as well as state cult. During the Republic, a temple to "ancient Hope" (Spes vetus) was supposed to have been located near the Praenestine Gate. It was associated with events that occurred in the 5th century BC, but its existence as anything except perhaps a private shrine has been doubted. A well-documented temple of Spes was built by Aulus Atilius Calatinus along with Fides, as the result of vows (vota) made to these goddesses during the First Punic War.

At Capua in 110 BC, a temple was built to the triad of Spes, Fides, and Fortuna. Spes was one of the divine personifications in the Imperial cult of the Virtues. Spes Augusta was Hope associated with the capacity of the emperor as Augustus to ensure blessed conditions.

Like Salus ("Salvation, Security"), Ops ("Abundance, Prosperity"), and Victoria ("Victory"), Spes was a power that had to come from the gods, in contrast to divine powers that resided within the individual such as Mens ("Intelligence"), Virtus ("Virtue"), and Fides ("Faith, Fidelity, Trustworthiness"). The Greek counterpart of Spes was Elpis, who by contrast had no formal cult in Greece.

The primary myth in which Elpis plays a role is the story of Pandora. The Greeks had ambivalent or even negative feelings about "hope", and the concept was unimportant in the philosophical systems of the Stoicss and Epicureans. In Rick Riordan's The Heroes of Olympus series, the Day of Hope (also known as the Feast of Spes), which falls on August 1, is chosen by the series main antagonist, the primordial goddess, Gaia, as the day of her awakening. This is done with the irony that the day when humanity would place their hope to their highest would be the day when they would lose all their hope forever. And Helena the Younger wife of Julian II.

And (posthumously) of Constantius I. Fausta Flavia Maxima (289-326) was a Roman Empress, daughter of the Roman Emperor Maximianus. To seal the alliance between them for control of the Tetrarchy, in 307 Maximianus married her to Constantine I, who set aside his wife Minervina in her favour.

Fausta had a part in her father's downfall. In 310 Maximian died as a consequence of an assassination plot against Constantine. Maximian decided to involve his daughter Fausta, but she revealed the plot to her husband, and the assassination was disrupted. Maximian died, by suicide or by assassination, in July of that same year. Empress Fausta was held in high esteem by Constantine, and proof of his favour was that in 323 she was proclaimed Augusta; previously she held the title of Nobilissima Femina.

However three years later Fausta was put to death by Constantine, following the execution of Crispus, his eldest son by Minervina, in 326. The two deaths have been inter-related in various ways; in one, Fausta is set jealously against Crispus, as in the anonymous Epitome de Caesaribus, or conversely her adultery, perhaps with the stepson who was close to her in age, is suggested. Fausta was executed by suffocation in an over-heated bath, a mode of assassination not otherwise attested in the Roman world. David Woods offers the connection of overheated bathing with contemporaneous techniques of abortion, a suggestion that implies an unwanted, adulterous pregnancy according to Constantine's biographer Paul Stephenson. The Emperor ordered the damnatio memoriae of his wife with the result that no contemporary source records details of her fate: Eusebius, ever the sycophant, mentions neither Crispus nor Fausta in his Life of Constantine, and even wrote Crispus out of the final version of his Ecclesiastical History HE X. 9.4, Constantine's biographer Paul Stephenson observes. Significantly, her sons, once in power, never revoked this order. Her sons became Roman Emperors: Constantine II reigned 337 - 340, Constantius II reigned 337 - 361, and Constans reigned 337 - 350. She also bore three daughters Constantina, Helena and Fausta. Of these, Constantina married her cousins, firstly Hannibalianus and secondly Constantius Gallus, and Helena married Emperor Julian. Apparently a genealogical claim that her daughter Fausta became mother of Emperor Valentinian I is without foundation Valentinian I and children of Constantine I's second marriage were born in years close to each other, i. They were of the same generation. Constantine the Great Latin: Flavius Valerius Aurelius Constantinus Augustus ; 27 February c. 272 AD - 22 May 337 AD, also known as Constantine I or Saint Constantine (in the Orthodox Church as Saint Constantine the Great, Equal-to-the-Apostles), was a Roman Emperor from 306 to 337 AD. Constantine was the son of Flavius Valerius Constantius, a Roman army officer, and his consort Helena. His father became Caesar, the deputy emperor in the west in 293 AD. Constantine was sent east, where he rose through the ranks to become a military tribune under the emperors Diocletian and Galerius. In 305, Constantius was raised to the rank of Augustus, senior western emperor, and Constantine was recalled west to campaign under his father in Britannia (Britain). Acclaimed as emperor by the army at Eboracum (modern-day York) after his father's death in 306 AD, Constantine emerged victorious in a series of civil wars against the emperors Maxentius and Licinius to become sole ruler of both west and east by 324 AD. As emperor, Constantine enacted many administrative, financial, social, and military reforms to strengthen the empire. The government was restructured and civil and military authority separated. A new gold coin, the solidus, was introduced to combat inflation. It would become the standard for Byzantine and European currencies for more than a thousand years. The first Roman emperor to claim conversion to Christianity, Constantine played an influential role in the proclamation of the Edict of Milan in 313, which decreed tolerance for Christianity in the empire. He called the First Council of Nicaea in 325, at which the Nicene Creed was professed by Christians. In military matters, the Roman army was reorganised to consist of mobile field units and garrison soldiers capable of countering internal threats and barbarian invasions. Constantine pursued successful campaigns against the tribes on the Roman frontiers-the Franks, the Alamanni, the Goths, and the Sarmatians-even resettling territories abandoned by his predecessors during the Crisis of the Third Century. The age of Constantine marked a distinct epoch in the history of the Roman Empire. He built a new imperial residence at Byzantium and renamed the city Constantinople after himself (the laudatory epithet of "New Rome" came later, and was never an official title). It would later become the capital of the Empire for over one thousand years; for which reason the later Eastern Empire would come to be known as the Byzantine Empire. His more immediate political legacy was that, in leaving the empire to his sons, he replaced Diocletian's tetrarchy with the principle of dynastic succession. His reputation flourished during the lifetime of his children and centuries after his reign. The medieval church upheld him as a paragon of virtue while secular rulers invoked him as a prototype, a point of reference, and the symbol of imperial legitimacy and identity. Beginning with the Renaissance, there were more critical appraisals of his reign due to the rediscovery of anti-Constantinian sources.

Critics portrayed him as a tyrant. Trends in modern and recent scholarship attempted to balance the extremes of previous scholarship. Constantine is a significant figure in the history of Christianity.

The Church of the Holy Sepulchre, built on his orders at the purported site of Jesus' tomb in Jerusalem, became the holiest place in Christendom. The Papal claim to temporal power in the High Middle Ages was based on the supposed Donation of Constantine. He is venerated as a saint by Eastern Orthodox, Byzantine Catholics, and Anglicans. World-renowned expert numismatist, enthusiast, author and dealer in authentic ancient Greek, ancient Roman, ancient Byzantine, world coins & more. Ilya Zlobin is an independent individual who has a passion for coin collecting, research and understanding the importance of the historical context and significance all coins and objects represent. Send me a message about this and I can update your invoice should you want this method. Getting your order to you, quickly and securely is a top priority and is taken seriously here. Great care is taken in packaging and mailing every item securely and quickly. What is a certificate of authenticity and what guarantees do you give that the item is authentic? You will be very happy with what you get with the COA; a professional presentation of the coin, with all of the relevant information and a picture of the coin you saw in the listing. Additionally, the coin is inside it's own protective coin flip (holder), with a 2x2 inch description of the coin matching the individual number on the COA.