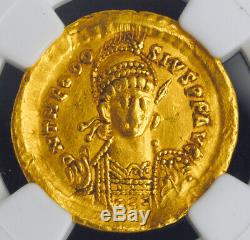 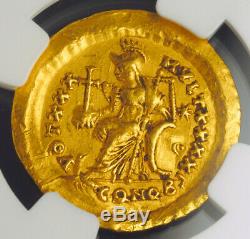 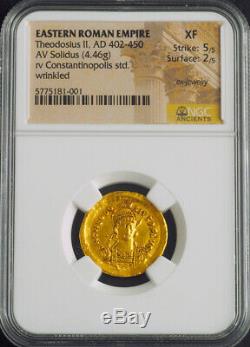 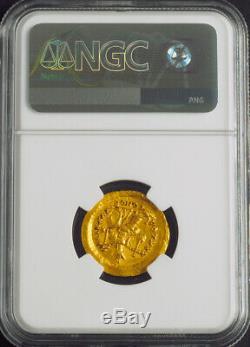 Legend: VOT XXX - MVLT XXXX / CONOB. 10 April 401 28 July 450, commonly surnamed Theodosius the Younger , or Theodosius the Calligrapher , was the Eastern Roman Emperor for most of his life, taking the throne as an infant in 402 and ruling as the Eastern Empire's sole emperor after the death of his father Arcadius in 408. He is mostly known for promulgating the Theodosian law code, and for the construction of the Theodosian Walls of Constantinople. He also presided over the outbreak of two great Christological controversies, Nestorianism and Eutychianism. Theodosius was born in 401 as the only son of Emperor Arcadius and his Frankish-born wife Aelia Eudoxia. Already in January 402 he was proclaimed co-Augustus by his father, thus becoming the youngest person ever to bear this title in Roman history.

In 408, his father died and the seven-year-old boy became Emperor of the Eastern half of the Roman Empire. According to Procopius, the Sasanian king Yazdegerd I (399-420) was appointed by Arcadius as the guardian of Theodosius, whom Yazdegerd treated as his own child, sending a tutor to raise him and warning that enmity toward him would be taken as enmity toward Persia. Government was at first by the Praetorian Prefect Anthemius, under whose supervision the Theodosian land walls of Constantinople were constructed. In 414, Theodosius' older sister Pulcheria was proclaimed Augusta and assumed the regency.

By 416 Theodosius was declared Augustus in his own right and the regency ended, but his sister remained a strong influence on him. In June 421, Theodosius married Aelia Eudocia, a woman of Greek origin. The two had a daughter named Licinia Eudoxia. A separation ultimately occurred between the imperial couple, with Eudocia's establishment in Jerusalem where she favoured monastic Monophysitism and Pulcheria reassuming an influential role with the support of the eunuch Chrysaphius. Theodosius' increasing interest in Christianity, fuelled by the influence of Pulcheria, led him to go to war against the Sassanids (421422), who were persecuting Christians; the war ended in a stalemate, when the Romans were forced to accept peace as the Huns menaced Constantinople.

In 423, the Western Emperor Honorius, Theodosius' uncle, died and the. Honorius' sister Galla Placidia and her young son Valentinian fled to Constantinople to seek Eastern assistance and after some deliberation in 424 Theodosius opened the war against Joannes. On 23 October 425, Valentinian III was installed as Emperor of the West with the assistance of the. Helion, with his mother acting as regent.

To strengthen the ties between the two parts of the Empire, Theodosius' daughter Licinia Eudoxia was betrothed to Valentinian. The item "Easter Roman Empire, Theodosius II (402-450 AD) Gold Solidus Coin. NGC XF 5/2" is in sale since Saturday, June 13, 2020. This item is in the category "Coins & Paper Money\Coins\ Ancient\Roman\ Imperial (27 BC-476 AD)".